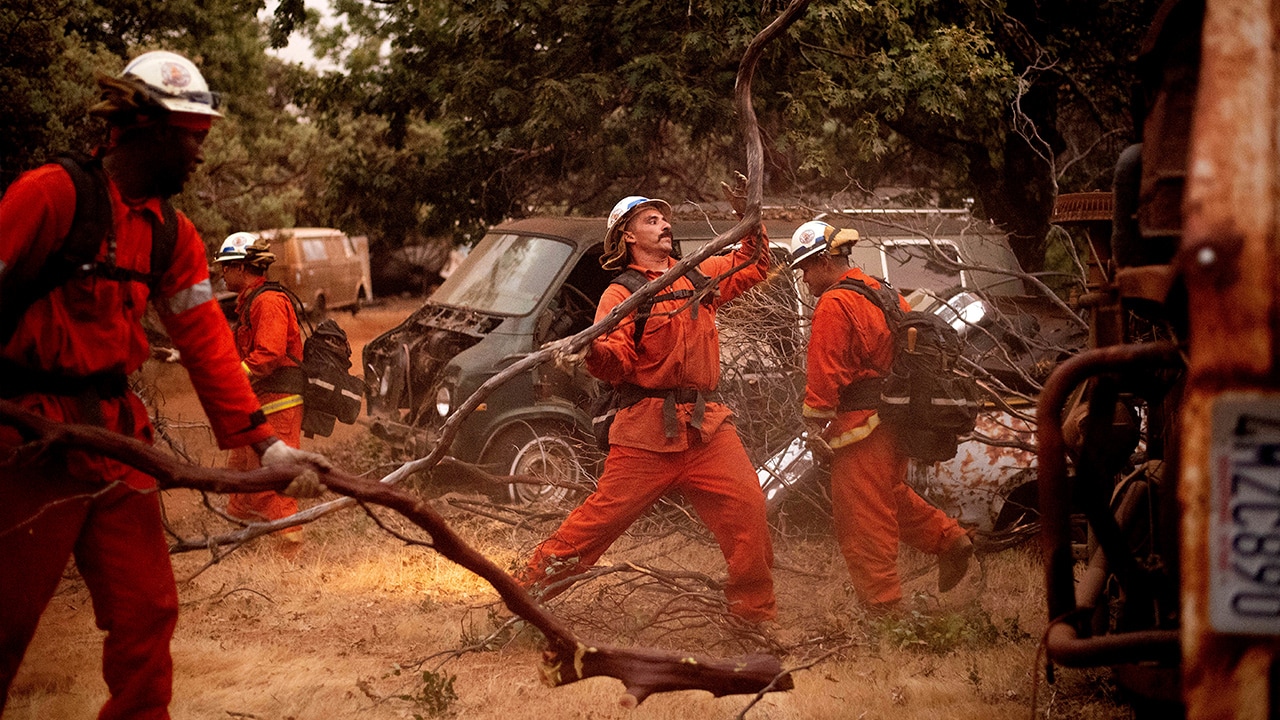 MARIPOSA — A deadly forest fire kept spreading Wednesday west of Yosemite National Park, and erratic winds and trees killed by a historic California drought are expected to pose more problems for firefighters, officials said.
The Ferguson Fire between the park and the town of Mariposa that’s popular with visitors has scorched 27 square miles of dry brush and timber and is largely burning out of control, said Richard Eagan, a spokesman with the California Department of Forestry and Fire Protection.
Forecasters expect thunderstorms Thursday afternoon to produce erratic, gusty winds that can be dangerous for more than 1,800 firefighters trying to stop the flames that started Friday. Another concern is thousands of trees killed by a yearslong drought.
“Dead trees are everywhere, north and south of the state, and when you add strong winds that can send ambers flying up to 5 miles, it can pose a huge risk for firefighters,” Eagan said.

The flames have shut down Highway 140, a key route into the park, during tourist season and forced evacuations in nearby communities. But three other park entrances were open, as were trails, campgrounds, restaurants and lodges, though smoke is polluting the air and limiting visibility.
Smoke from the fire about 4 miles from the park’s west entrance may be heavy at times, and visitors should be prepared to limit heavy outdoor activity when air quality is poor, park officials said.
Hot and dry weather on Tuesday hindered efforts to slow the growth of a forest fire near Yosemite National Park that killed a California firefighter last weekend, leading some tourists to cut short their visits. The growing flames shut down a key route into the park at the peak of tourist season.
More than 1,800 firefighters were battling the flames threatening more than 100 homes and businesses, the Forest Service said.

An inversion layer trapped smoke in the area, limiting air attacks and leading officials to issue a hazardous air alert, saying people with health conditions should stay indoors.
“Use common sense. If it looks smoky outside it’s probably not a good time to go for a run. And it’s probably not a good time for your children to play outdoors,” Mariposa County officials said.
Alyssa Sandoval of Pollock Pines planned to leave the park Tuesday. But she left a day early after spending a couple hours in a smoke-filled valley.


“The smoke was horrible, it was horrible. My mother got sick, my husband’s eyes were stinging, burning. I’ve never seen the valley like that. It was smoked out. You didn’t even know you were in Yosemite.” — Alyssa Sandoval of Pollock Pines
All amenities and trails remained opened Tuesday, and park rangers tending the entrances and the visitor center were informing tourists of the poor air quality, park spokesman Scott Gediman said. Information was also posted on the park’s social media accounts.
“Our primary goal is, get the information out to them so they can decide how best to go about their visit,” Gediman said.
Air quality monitors showed particulate levels in the park at “very unhealthy” levels, meaning everyone should avoid prolonged or heavy exertion or risk serious health effects such as respiratory problems.
Yet tourists plan their visit to Yosemite months or even years in advance. So far, there have been few cancellations, Gediman said.
Images posted to social media showed billowing smoke completely obscuring Half Dome, an iconic rock formation. Park webcams showed other landmarks, such as the El Capitan rock formation, at times concealed by thick plumes of smoke.
Graduate student Paul Schlesinger, 28, said the smoke-choked air and raining ash forced him and a group of friends to change their plans to hike up to Glacier Point, which normally offers sweeping views.
But after driving for 90 minutes from Fresno and waiting in a 5-mile long line of cars to enter the park on Sunday, they decided to instead hike in Mariposa Grove.
“We didn’t think it was worth exposing our lungs to that air when you couldn’t see anything but also wanted to take advantage of our day there,” he said.

On Monday, crews retrieved the body of heavy fire equipment operator Braden Varney, 36, after he died in steep terrain on Saturday. Firefighters took turns keeping vigil near Varney’s body and saluted as it was taken to a coroner’s office.

Furniture Auction Raises $10,000-Plus for Angels of Grace

A Comic-Con Without Marvel, HBO Gives Others a Chance to Pop