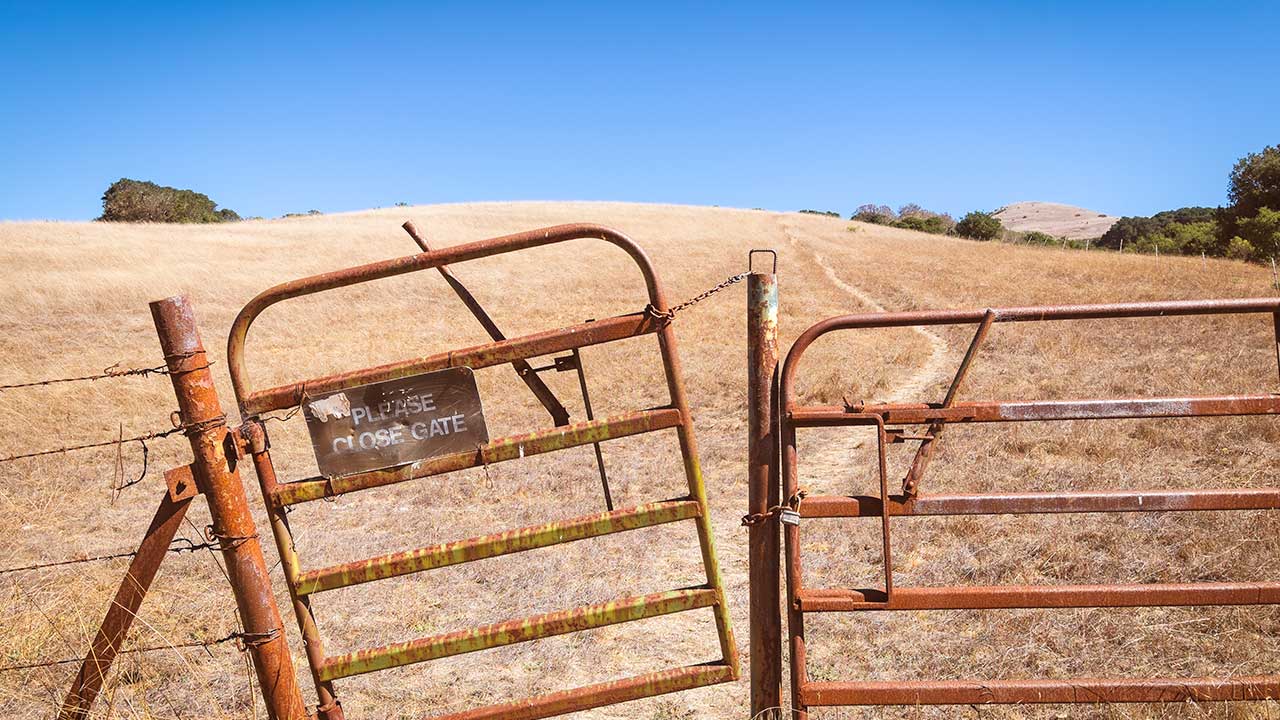 The Central Valley almond growers had two wells go dry this summer. Two of her adult children are now getting water from a new well the family drilled after the old one went dry last year. She’s even supplying water to a neighbor whose well dried up.

“It’s been so dry this last year. We didn’t get much rain. We didn’t get much snowpack,” Moore said, standing next to a dry well on her property in Chowchilla. “Everybody’s very careful with what water they’re using. In fact, my granddaughter is emptying the kids’ little pool to flush the toilets.”

Amid a megadrought plaguing the American West, more rural communities are losing access to groundwater as heavy pumping depletes underground aquifers that aren’t being replenished by rain and snow.

More than 1,200 wells have run dry this year statewide, a nearly 50% increase over the same period last year, according to the California Department of Water Resources. By contrast, fewer than 100 dry wells were reported annually in 2018, 2019, and 2020.

The groundwater crisis is most severe in the San Joaquin Valley, California’s agricultural heartland, which exports fruits, vegetables, and nuts around the world.

More Than 94% of State in Extreme or Exceptional Drought

Shrinking groundwater supplies reflect the severity of California’s drought, which is now entering its fourth year. According to the U.S. Drought Monitor, more than 94% of the state is in severe, extreme or exceptional drought.

California just experienced its three driest years on record, and state water officials said Monday they’re preparing for another dry year because the weather phenomenon known as La Nina is expected to occur for the third consecutive year.

Farmers are getting little surface water from the state’s depleted reservoirs, so they’re pumping more groundwater to irrigate their crops. That’s causing water tables to drop across California. State data shows that 64% of wells are at below-normal water levels.

Water shortages are already reducing the region’s agricultural production as farmers are forced to fallow fields and let orchards wither. An estimated 531,00 acres of farmland went unplanted this year because of a lack of irrigation water, according to the U.S. Department of Agriculture.

As climate change brings hotter temperatures and more severe droughts, cities and states around the world are facing water shortages as lakes and rivers dry up. Many communities are pumping more groundwater and depleting aquifers at an alarming pace.

“This is a key challenge not just for California, but for communities across the West moving forward in adapting to climate change,” said Andrew Ayres, a water researcher at the Public Policy Institute of California.

Madera County, north of Fresno, has been hit particularly hard because it relies heavily on groundwater. The county has reported about 430 dry wells so far this year.

In recent years, the county has seen the rapid expansion of thirsty almond and pistachio orchards that are typically irrigated by agricultural wells that run deeper than domestic wells.

“The bigger straw is going to suck the water from right beneath the little straw,” said Madeline Harris, a policy manager with the advocacy group Leadership Council for Justice and Accountability. She stood next to a municipal well that’s run dry in Fairmead, a town of 1,200 surrounded by nut orchards.

“Municipal wells like this one are being put at risk and are going dry because of the groundwater overdraft problems from agriculture,” Harris said. “There are families who don’t have access to running water right now because they have dry domestic wells.”

Residents with dry wells can get help from a state program that provides bottled water as well as storage tanks regularly filled by water delivery trucks. The state also provides money to replace dry wells, but there’s a long wait to get a new one. 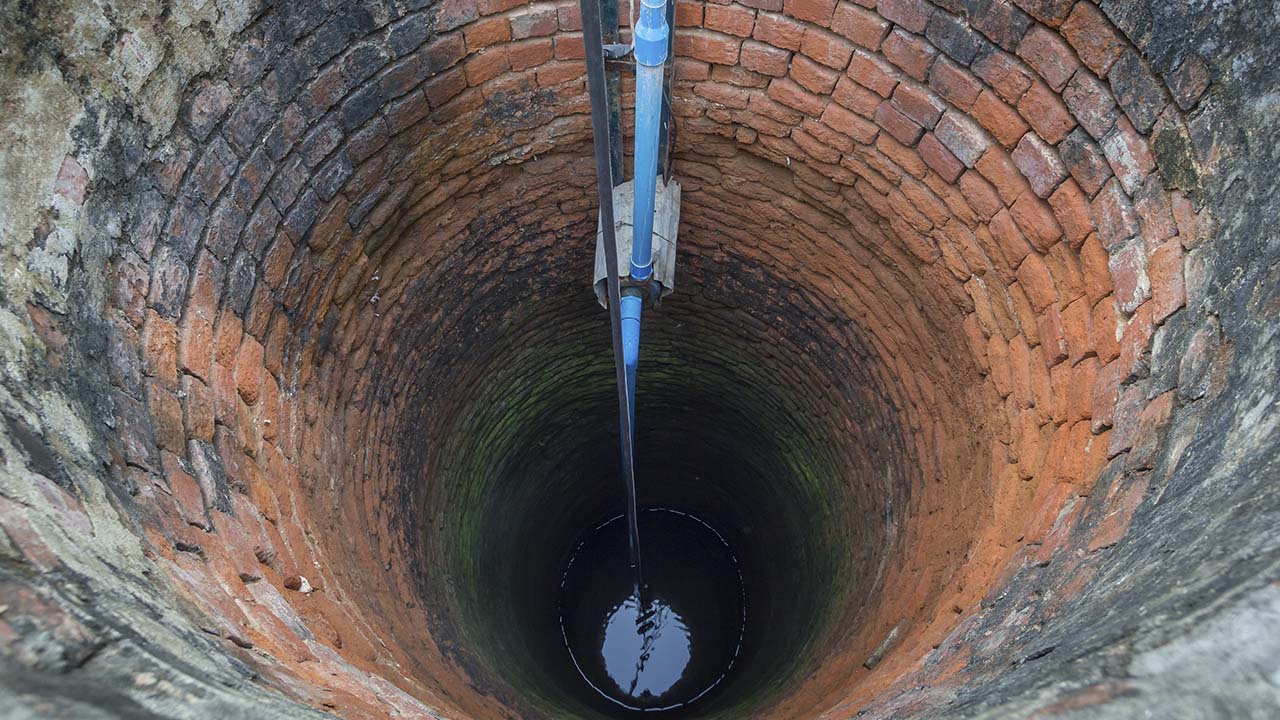 Not everyone is getting assistance.

Thomas Chairez said his Fairmead property, which he rents to a family of eight, used to get water from his neighbor’s well. But when it went dry two years ago, his tenants lost access to running water.

Chairez is trying to get the county to provide a storage tank and water delivery service. For now, his tenants have to fill up 5-gallon buckets at a friend’s home and transport water by car each day. They use the water to cook and take showers. They have portable toilets in the backyard.

“They’re surviving,” Chairez said. “In Mexico, I used to do that. I used to carry two buckets myself from far away. So we got to survive somehow. This is an emergency.”

Well drillers are in high demand as water pumps stop working across the San Joaquin Valley.

Ethan Bowles and his colleagues were recently drilling a new well at a ranch house in the Madera Ranchos neighborhood, where many wells have gone dry this year.

“It’s been almost nonstop phone calls just due to the water table dropping constantly,” said Bowles, who works for Chowchilla-based Drew and Hefner Well Drilling. “Most residents have had their wells for many years and all of a sudden the water stops flowing.”

His company must now drill down 500 and 600 feet (152 to 183 meters) to get clients a steady supply of groundwater. That’s a couple hundred feet deeper than older wells.

“The wells just have to go deeper,” Bowles said. “You have to hit a different aquifer and get them a different part of that water table so they can actually have fresh water for their house.”

In March, Gov. Gavin Newsom signed an executive order to slow a frenzy of well-drilling over the past few years. The temporary measure prohibits local agencies from issuing permits for new wells that could harm nearby wells or structures.

Farmworkers Expected to Migrate Out of California

California’s groundwater troubles come as local agencies seek to comply with the Sustainable Groundwater Management Act, which Gov. Jerry Brown signed in 2014 to prevent groundwater overpumping during the last drought. The law requires regional agencies to manage their aquifers sustainably by 2042.

“These communities are going to be impacted from drinking water supplies and loss of jobs,” said Isaya Kisekka, a groundwater expert at the University of California, Davis. “There’s a lot of migration of farmworkers as this land gets fallowed.”

Farmers and residents in the Valley are hoping for help from above. “Hopefully we get a lot of rain,” Chairez said. “There’s a big need: water. We need water, water, water.”