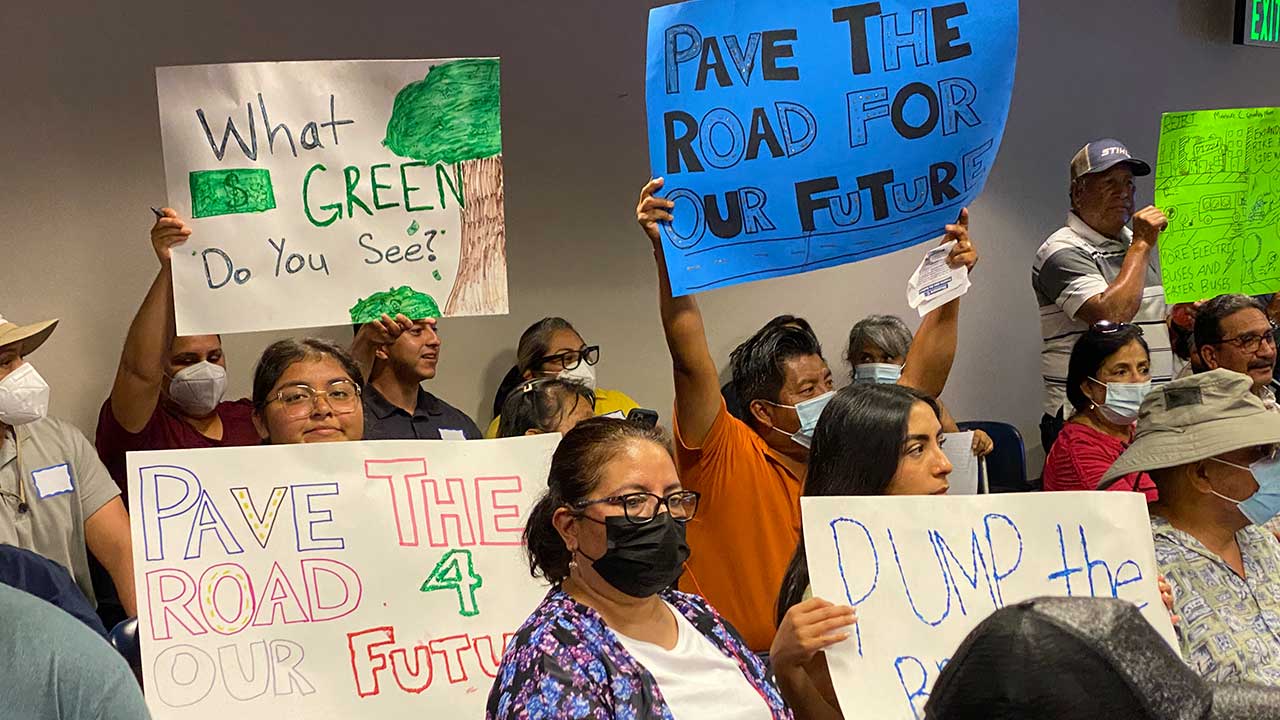 Opponents of placing Measure C on the November 2022 ballot show up at a Fresno COG meeting. (GV Wire/David Taub)
Share with friends

A last-minute proposal put forward Thursday evening by the city of Fresno for a Measure C renewal spending plan was approved 11-4 by the Fresno Council of Governments Policy Board after an extensive public hearing, but the proposal still faces scrutiny by county officials that could yet keep the sales tax measure from reaching the November ballot.

Supervisor Buddy Mendes, who chairs the Fresno County Transportation Authority, said the Fresno alternate plan, which most COG Policy Board members received just prior to Thursday’s meeting at City Hall, is still very much a work in progress.

And Supervisor Steve Brandau, who serves with Mendes on the Fresno County Transportation Authority, says he won’t vote to put the Fresno proposal on the November ballot.

“It may pass but not with my help,” he told GV Wire Friday morning in a text message. “I thought the City of Fresno did a masterful job obtaining their desired outcome. They were the big winner. The small city mayors voted in their best interest and gained dollars for their communities The County of Fresno was a nonfactor and biggest loser.”

The Fresno plan proposes shifting $185 million from the county of Fresno to the incorporated cities to use for street, sidewalk, and curb repairs as well as “flexible funds” that Fresno Mayor Jerry Dyer said the city would use to fully fund FAX, the bus transit agency.

Transportation officials estimate that a renewed Measure C, a half-cent sales tax for transportation projects, would generate $6.8 billion over its 30-year life. 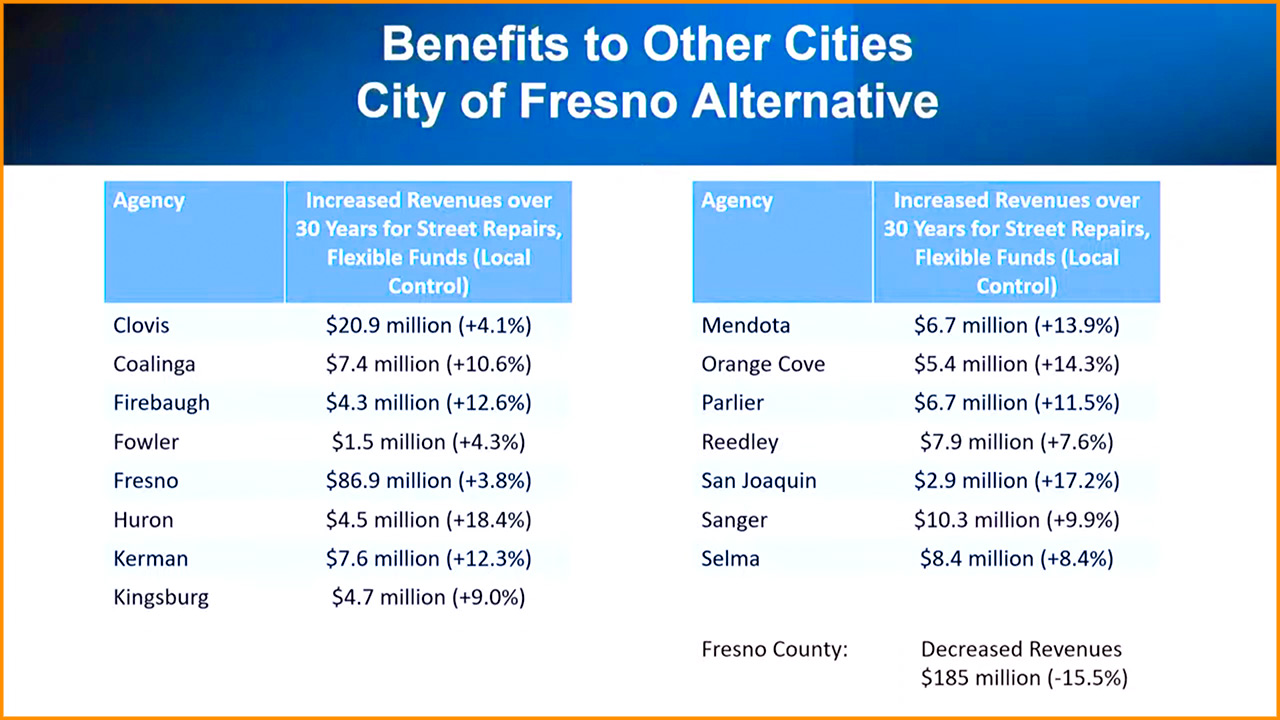 Under the original proposal that came after months of public meetings and surveys and that had won the approval of various COG technical and executive committees, funding for FAX was slated to be slashed significantly. Dyer acknowledged that city officials had been working on the city’s proposal for the past two weeks without input from the public or other elected officials across the county.

The city’s proposal would remove $25 million to improve Grantland Avenue west of Highway 99 and $20 million for Temperance Avenue on the city’s southeast side, leaving those improvements up to developers to fund, Dyer said.

Mike Prandini, president and CEO of the Building Industries Association of Fresno and Madera Counties, said Friday morning that he was surprised to see the city’s proposal eliminates funding for the Grantland and Temperance projects. Developers had proposed including them in Measure C because of their regional impact, he said.

The cost of those road improvements would be borne by future new home buyers in those areas, but Prandini said he would not estimate just how much more expensive the homes would have to be to cover those costs. 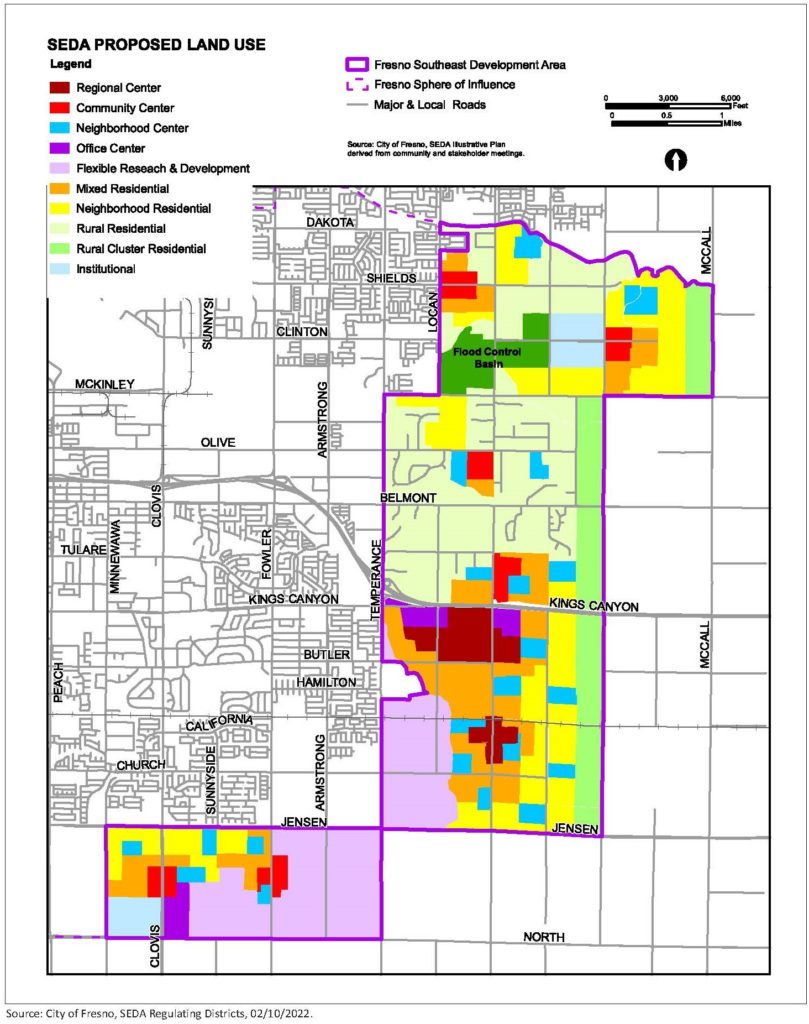 Fresno’s proposal originally called for an 80-20 formula of dividing funding for street rehabilitation, 80% for population and 20% for road miles, but that formula was adjusted in the final motion to a 78%-22% split to account for how the Fresno County Transportation Authority calculates population.

Mendes said a lot more rechecking of numbers will need to be done in the next four days before the proposal is presented Tuesday to the Board of Supervisors and then Wednesday to the Fresno County Transportation Authority.

The city’s decision to introduce a last-minute proposal is “kind of a hell of a way to run a railroad,” Mendes told GV Wire. “You have to keep working the numbers and see what it means.”

COG’s decision to try to put the Measure C renewal on November’s ballot, which most of the dozens of people speaking at Thursday’s meeting opposed, gives additional opportunities to win voter approval, Mendes said. The current version of Measure C, which will sunset in 2027, needed more than one election to win approval in 2006, so the more election options means “more bites of the apple,” he said.

Many who spoke at the Measure C meeting complained that the Fresno proposal was surfacing at the 11th hour, giving the public little to no time to properly review it.

Reedley would gain $7.9 million under the Fresno proposal. But Mayor Mary Fast, who attended the meeting remotely, said she could not vote on a document that she hadn’t even seen. Fresno’s proposal was handed out to the officials attending in person but was not emailed to those who like Fast attended remotely. The mayors of Mendota, San Joaquin, and Selma also voted against the Fresno proposal.

Clovis Mayor Jose Flores tied his city’s support by requiring that the city’s definition of “transit oriented developments” eligible for Measure C money be revised to relax the housing density and frequency of service requirements. Otherwise, Flores said, only the city of Fresno would qualify for that pot of money. Dyer explained that the housing and transit frequency numbers came from the state of California, which advocates for more housing density and higher transit use to improve air quality.

The motion, as approved by the Policy Board, calls for Fresno and Clovis to “clarify” the wording on the TOD requirements.

Related Topics:FeaturedMeasure C
Up Next

Bridging the Gap Between Medical and Mental Healthcare