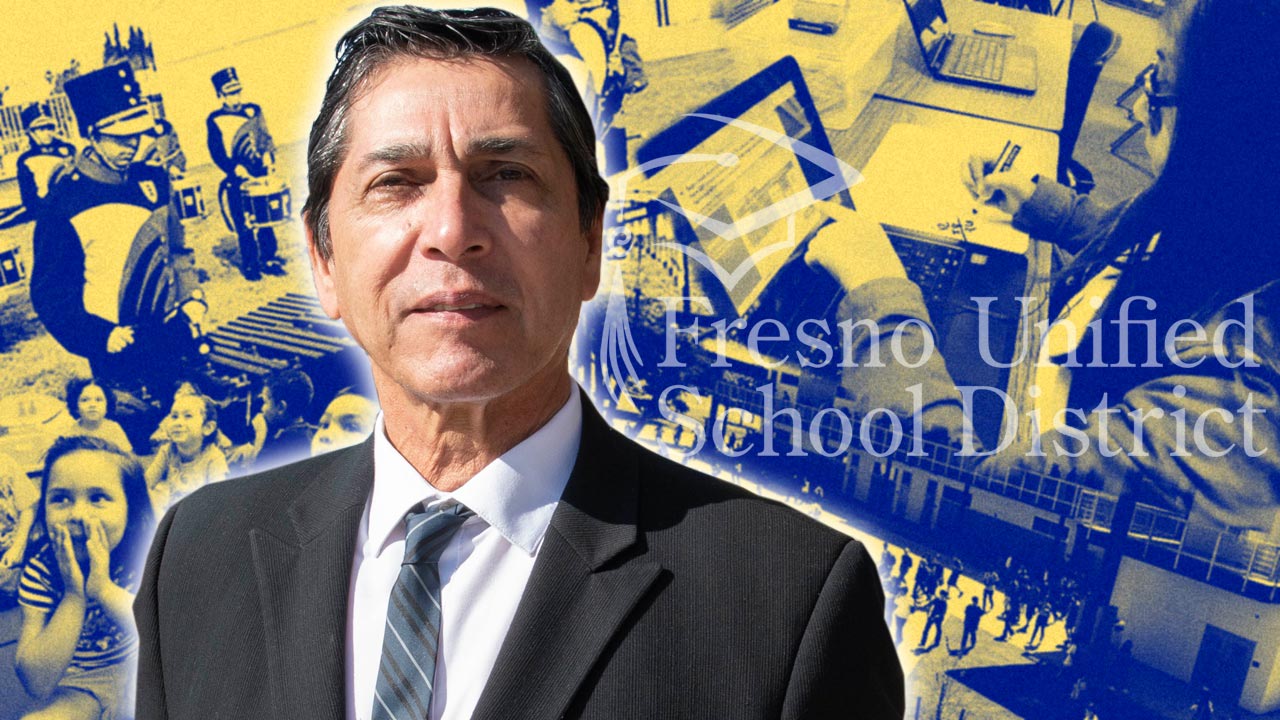 Daniel Renteria, a candidate for the FUSD School Board, says students should receive the education and services they are entitled to regardless of their ZIP code. (GV Wire Composite/Paul Marshall)
Share with friends

Daniel Renteria has seen firsthand what happens when students leave school without being properly educated.

Some of them wind up breaking the law and going to jail. Renteria, who worked for decades as a state parole officer and supervisor, knew that the chance for rehabilitation was tougher for those who couldn’t read well, or at all, or do simple math.

Education is what made a difference for himself and his family, which he says helped him decide to run for the Fresno High Area 5 Trustee seat after the death last July of Trustee Carol Mills.

“Education has allowed me to have the things I have to support my family, to keep my family educated,” said Renteria, one of two Fresno High alumni who are candidates. “And it’s really done me well, and I thought this was an opportunity for me to pay back my community, pay back my school.”

The other three candidates in the April 12 special election are retired teacher Russ Allen, retired firefighter Andrew Fabela, and community organizer/teacher Andy Levine. The winner of the election will serve the remainder of the late Carol Mills’ term.

Not Pushed to Excel

Although he credits education with giving him the resources to support his family, Renteria, 70, was somewhat of a late bloomer academically. His father, a single parent who drove cabs to support his five children, moved the family from the city’s west side to what was then considered “the north side of town” in what is now central Fresno. 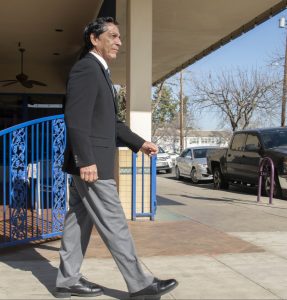 Fresno Unified board candidate Daniel Renteria walks through the Tower District. The former parole agent says he clearly understands the importance of ensuring at-risk kids are successful in the classroom.

Renteria then attended Fremont Elementary, Hamilton Junior High, and Fresno High. The location change put him and his siblings in better schools, but he wasn’t pushed to excel at Fresno High, prompting his high school counselor to advise him to go into the military (during the Vietnam War) instead of considering college.

He hearkened back to what his high school counselor had told him half a century earlier when he heard a young student at a recent School Board meeting relate how one of her instructors said she wasn’t good enough.

Instead of following his counselor’s advice, Renteria instead enrolled in Fresno City College, earned his AA degree, and got a job with Fresno County at the juvenile hall complex while attending Fresno State, where he got his bachelor’s degree. He moved next to a job as a Fresno County probation officer and then was hired by the California Department of Corrections, where he rose through the ranks in the parole office, writing curriculum for training programs, and then finally retiring as an administrator.

Some of the programs he was involved with let him see firsthand the struggles that many students and their families face.

He was teamed up with a mental health worker and a social worker to focus on second-grade students attending Lowell and Calwa elementary schools. The students were selected because they were identified as at-risk for dropping out when they were older unless there was intervention.

“I used to take those students to the library, get them a library card and they would come home with stacks of books. And these were families from Calwa and Lowell, who were very poor families. Their parents did not know how to read. They couldn’t help them. They couldn’t help them at home. And many times the child did not even have a place to do their homework.

“The homes are so overcrowded. There was no place, no table. I learned so much by working with those two schools and what it really took to change lives. So many years later, I still don’t know whether we learned our lesson or some benefit from those programs.”

He worked with parolees enrolled in school and saw how difficult it can be for schools to connect with parents.

“Many times parents are very timid about this, they are afraid, they’re timid. Maybe language is a barrier, you know, any number of reasons,” he said. In those cases, schools need to figure out how to do better outreach to encourage parents to participate, Renteria said.

Tower District is His ‘Home Base’

After retiring from his state job, Renteria served as director of the Tower District Marketing Committee until recently. He considers the Tower District his “home base” — it’s where he had his paper route “business” as a youngster.

He still spends a lot of time in the Tower District, but these days it’s to campaign for the School Board. He’s raising funds to pay for yard signs and other campaign paraphernalia. According to campaign finance reports, Renteria has raised $12,700 in cash, including two donations totaling  $8,000 from Granville Homes, and a $5,000 loan from a Contra Costa teacher.

Renteria has lived in his central Fresno neighborhood home for most of his adult life. The Renteria family is now in its third generation at Fresno High — Renteria was followed there by his son and now his grandson, who receives special education services because he has autism.

One of his top priorities as a School Board trustee, Renteria said, will be to make sure students receive the services and the education they are entitled to, and that the quality of children’s education doesn’t depend on their ZIP code.

But he’s guarded when asked about what kind of job he thinks Superintendent Bob Nelson and the Fresno Unified administration have done, and what it would take to improve student performance. Rather than making pronouncements now, Renteria said he wants to study and review where the district is and then help set goals for the superintendent and district.

“I have seen the studies and the statistics, and they’re not overly flattering. With regard to Fresno High, I know it’s not where it really should be,” he said. “But rather than be critical, I’m going to look at the positive side and find out what can we do to bring that up? Who can we work with? Who are the stakeholders? How can we involve more parents and … work with the Fresno Teachers Association?”

Renteria is equally circumspect when asked whether the Fresno High mascot, formerly the image of an American Indian, should have been changed.

The issue has been highly divisive and continues to be, and Renteria said he has taken a somewhat neutral stance.

“The best thing that could have happened, happened,” he said. “It was a decision by the students, the students themselves decided that it was time to change.

Renteria is more forthcoming about whether he thinks there should be COVID-19 vaccine mandates for students and school staff. He recalls getting vaccines for childhood diseases such as rubella and for polio when he was growing up in the 1950s. He contracted the coronavirus before he had a chance to get vaccinated, and he has seen friends sicken and die from it over the past two years.