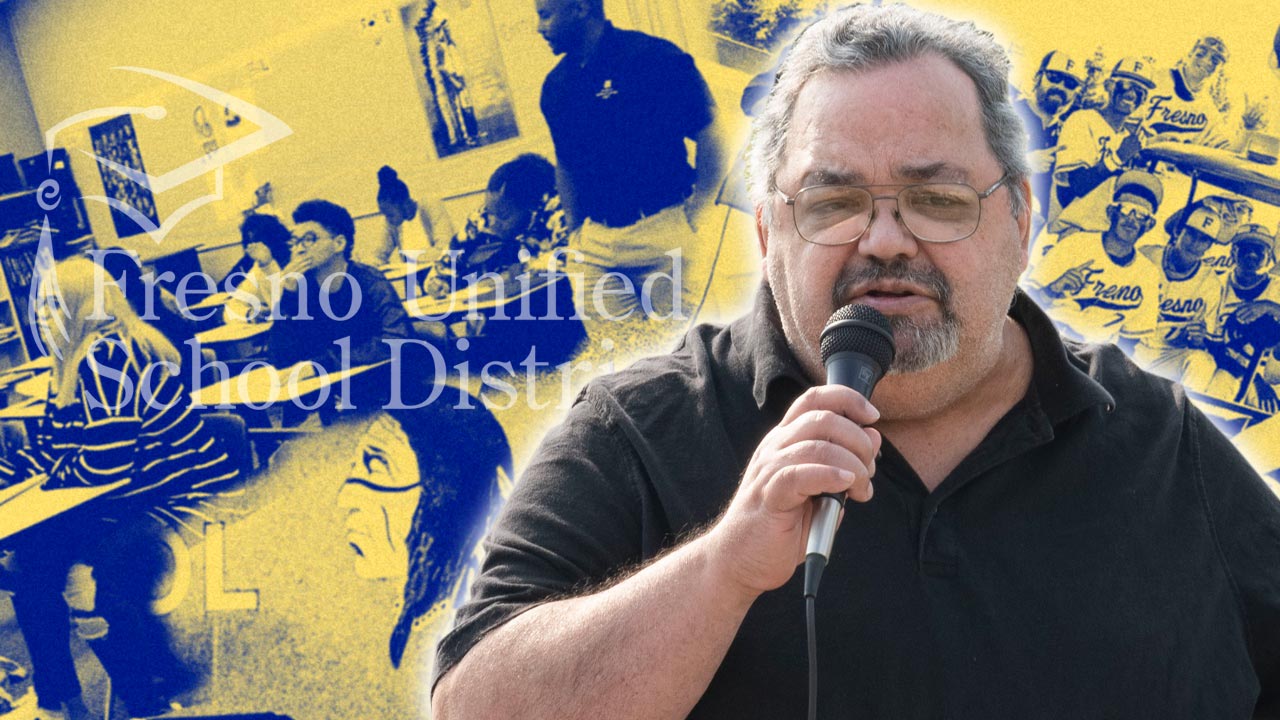 Andrew Fabela has been a mainstay — some might call him a gadfly — at FUSD School Board meetings, sometimes getting into verbal jousts with trustees. (GV Wire Composite/Paul Marshall)
Share with friends

Andrew Fabela has been asking questions of Fresno Unified officials for nearly two decades, starting when his daughter was attending elementary school. He has been a mainstay — some might call him a gadfly — in the audience of School Board meetings, sometimes getting into verbal jousts with trustees.

Fabela, 60, is one of four candidates running for the Fresno High Area 5 trustee seat that was left vacant after the death last July of longtime Trustee Carol Mills.

He says he’s running to take his advocacy for parents to a higher level.

What sets him apart from the other three candidates? He points to his advocacy efforts and knowledge of district operations gained over the past 15 years, combined with a desire to “represent the parents and the students and those teachers who want to teach.”

And that includes standing up to raise challenges last year when Fresno Unified trustees were considering appointing Mills’ replacement instead of scheduling a special election. 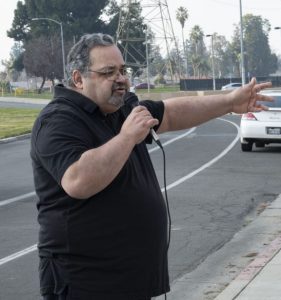 Out of the four candidates now running, he said, “I was the only one out there that fought to get a vote, get an election … If they really had a strong conviction for the Fresno High area, they would have been there at that board meeting. Fighting to stop the board from appointing somebody. So, but they weren’t. They were nowhere to be found.”

Fabela is a native of Selma who attended school there and in Reedley before graduating from San Joaquin Memorial High School in Fresno. His father, a teacher, wanted Fabela to follow in his footsteps, but Fabela wanted to be a forester.

He was hired as a firefighter by the U.S. Forest Service right out of high school and enrolled in Reedley College for its forestry program, riding his bike from home to the campus.

Fabela joined the Smoke Jumpers, an elite unit among firefighters. But after he was burned while fighting the firestorm that ravaged the Oakland Hills in 1991, he retired several years later, he says.

He soon found something new that fired him up. His daughter’s school, Slater Elementary, had undergone a state takeover, and Fabela became an involved parent. He says he looked at the science test scores for his daughter’s next school, Malloch Elementary, and then volunteered to help build a science lab in an empty classroom that the PTA helped underwrite. But after his daughter’s sixth-grade graduation, the district closed the lab, he said.

His battles continued when his daughter attended Bullard High School. Her algebra teacher was an art appreciation major from UC Davis who had “no idea what to do with algebra. The math director would give him packets to give to the kids,” Fabela said.

In his daughter’s sophomore year her geometry teacher had to take an extended medical leave and was replaced by a series of teachers and counselors filling in until the teacher could return, which hampered students’ ability to learn, Fabela said.

He wasn’t fighting just for his daughter’s education. Over the years, parents would see him speaking out at School Board meetings and contact him with their own stories, so he became an advocate for them as well.

He questioned why the district was proposing using bond measure funds to put air conditioning in portable classrooms — “That’s against the law because you can’t use school bond funds and spend them on temporary trailers and temporary stuff because that eliminates the reason for having a bond” — and why the district was spending money to put Wi-Fi on buses instead of air-conditioning them — “We’re in the fourth hottest place in America. … I don’t think a kid is worried about Wi-Fi when he’s an asthmatic and he’s gasping for air.”

Fabela said the district needs to strive harder to improve student academic performance. Graduation rates don’t mean a thing if students can graduate without even being able to read and write, he said. He says he was working a registration table for the September gubernatorial recall election when a young man appeared and asked for a ballot. Fabela quickly realized that the man, who said he was a Sunnyside High graduate, could not read the form.

Fabela said he asked the young man how he got a diploma if he couldn’t read and was told that after he flunked his tests and failed his courses, “I just go to summer school and they’ll give me a C.”

Some of the changes he wants the district to make: Get bad teachers out of classrooms more quickly, instead of the three years that Fabela says it took to remove one teacher whose classroom looked to him like a rowdy scene in the movie “Animal House.”

The district should keep teachers at schools where their extra training will benefit students most in need. At Wilson Elementary, where students tested low in reading, teachers were offered three years of literacy training. But after completing the training, many teachers transferred to schools north of Shaw Avenue where reading scores were already higher, Fabela said.

“So then that school is left with no teachers that are trained to help those students,” he said. “I think when you get trained in something, you have to stay at that school for at least five years so that we can gather data for five years. We’ll find out if that program works. The FTA (Fresno Teachers Association) is probably not going to like it, but so be it.”

Fabela said he doesn’t see Superintendent Bob Nelson taking the steps needed to hold his staff accountable for student performance in a school district that historically underperforms the state average.

“He’s not a very good leader. He wants everybody to like him, which is nice,” Fabela said. “But in terms of when you have to insist upon jobs being completed and services being distributed, it takes a stern hand to do that.”

Friction with School Board

Over the years he made a few enemies, including now a majority of the School Board that has twice rejected his nomination by Bullard High Area Trustee Terry Slatic to the district’s Citizens Bond Oversight Committee.

And he’s also raised a few eyebrows, such as last year when he publicly questioned whether Mills, then privately battling Lou Gehrig’s Disease and speaking with computer assistance, could still adequately represent the Fresno High Area. Mills responded with a statement about being “disparaged” for being disabled.

Fabela says that was never his intent, as he’s made no secret of his own epilepsy and had always thought highly of Mills when he worked with her over the years.

“I swear to God it was not done out of malice,” he said, noting that Mills had stopped turning her camera on during the virtual board meetings and she seemed to be struggling more and more to speak. “We came back to meeting in person. Well, she’s not there and that’s when I said, ‘I want to see my representative, my trustee, where is she?’ ”

As for being a voice for parents, Fabela says he knows his role would need to change somewhat if elected to the School Board. He says he would form a parent council at each school in the Fresno High area to meet regularly with him and share their concerns, which he could bring up during the superintendent/board comments portion of the meeting. At the most recent board meeting, however, the board deadlocked on a vote to restore the comment period to the agenda.

Fabela is running what he calls a “grassroots” campaign. Others might call it shoestring. In his candidate campaign statement, Fabela declared that he doesn’t intend to raise or spend more than $2,000. Without funds to spend on mailers and yard signs, his campaign primarily involves going door to door to talk to voters or standing next to schools with a portable PA system to introduce himself to parents who have come to pick up their kids. When he runs out of campaign business cards, he prints up a new batch at home.

During his campaign walks, both parents and kids tell him they didn’t want the Fresno High mascot to change from an image of an Iroquois Indian to a line drawing of Royce Hall, the oldest building on campus, and the letter “F”.

Fabela said he disagreed with the decision to change the mascot.

Fabela said he’s also opposed to mandating COVID-19 vaccinations for students and staff. “I believe that with liberty comes responsibility. And if you do not choose to have a vaccination, that is your prerogative as a citizen of this country,” he said.