Rahmad Kerel Parke, 25, is in Fresno County Jail after his arrest in Los Angeles for allegedly killing his grandfather and mother in Fresno on Jan. 6. 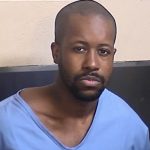 Parke was picked up by Los Angeles police on Saturday after Fresno detectives received a tip that he was in Sherman Oaks, the Fresno County Sheriff’s Office said.

Arrangements were made to transfer Parke to Fresno on Wednesday. His bail was set at $2 million.

Parke was wanted for the killings of his 90-year-old grandfather, Mel Abdelaziz, and his 58-year-old mother, Melba Abdelaziz.

Mel Abdelaziz had been a church pastor for 70 years.

The victims were slain while visiting a home on Tulare Avenue, where Parke was staying, the sheriff’s office said. Deputies found the grandfather outside and the mother inside the house.

Family members pleaded for Parke to turn himself in during a news conference Friday at the sheriff’s office.

Memorial Service Is Friday in Clovis

A celebration of life for Mel and Melba Abdelaziz is scheduled for 10:30 a.m. Friday at Celebration Church, 100 West Ashlan Ave. in Clovis.