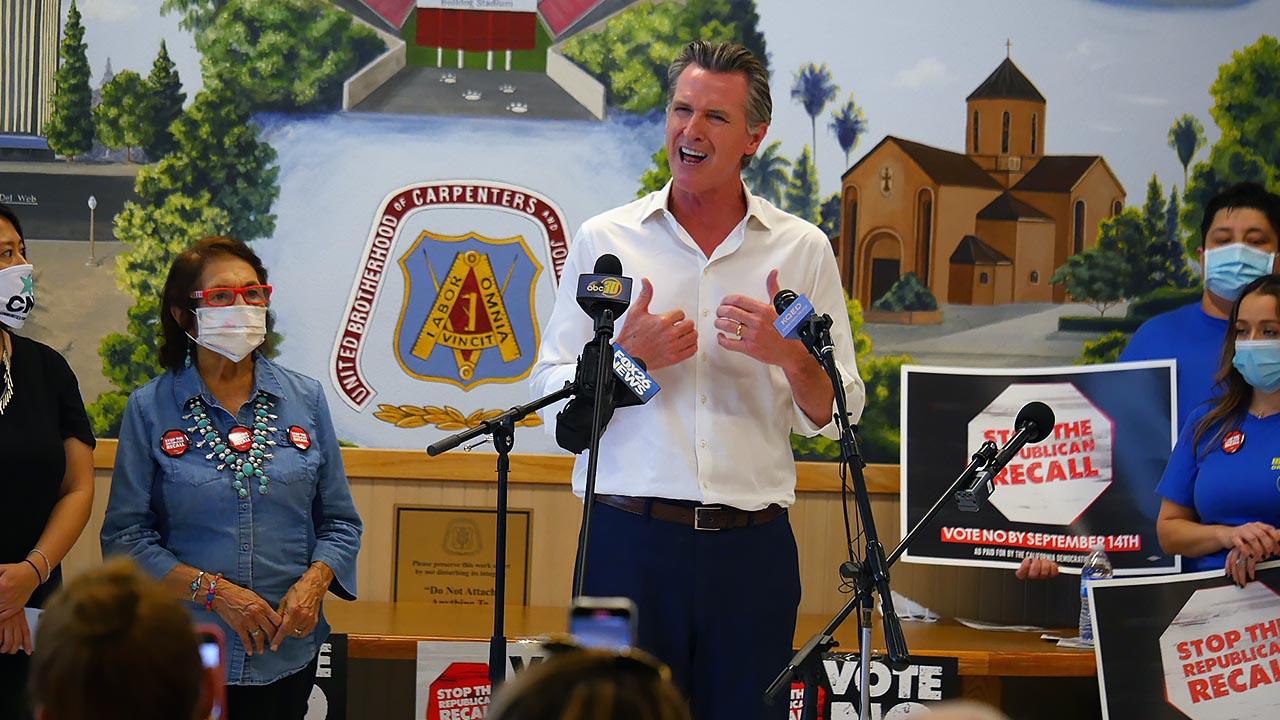 Gov. Gavin Newsom bashes Larry Elder and encourages supporters to get out the "no" vote on the recall Thursday in Fresno. (GV Wire/Jahz Tello)
Share with friends

Entering a hot, stuffy union hall in west Fresno bearing pizzas as gifts, Gov. Gavin Newsom exhorted his supporters to do their part to get out the “no” votes in the Sept. 14 recall.

“Either we reject this recall or we have someone who’s to the right of Donald Trump as the next governor of the state of California,” Newsom said about the leading replacement candidate, Larry Elder, at the Carpenters Local building.

Newsom said he’s been to Fresno “dozens” of times. He touted his homeless initiatives, fighting crime, and the economy. He also pointed to $600 million in economic development in the Central Valley.

“We’re, again, doing things that haven’t been done in the past to embrace an economic and workforce development strategy. And I want to just remind people, California (has outpaced) the American economic recovery,” Newsom said.

Related Story: There Are Too Few Republicans to Recall Newsom: Poll

When asked about why he didn’t block the parole of David Weidert — the Fresno man who served 40 years for the murder of a disabled man buried alive — Newsom did not immediately recognize the case but offered an explanation.

“We have an independent body that reviews those paroles, makes decisions on the basis of public safety. That is reviewed by a large team of people, not just the parole board. It goes through a process. And ultimately recommendations are made to me,” Newsom said.

Weidert was released from jail last month, after being granted parole on his fourth attempt. The previous three times, the governor — including Newsom in 2020 — legally reversed the decision.

“People that have served decades, that have actually conducted themselves within prison and have committed themselves to rehabilitation. I think in the spirit of the Bible that I was taught (as a) Santa Clara University graduate, the spirit of second chances and opportunity, someone who spends decades and decades and decades behind bars and has the opportunity to be paroled and plays by the rules and does the hard work and is not a risk possessed by psychologist and a parole board, I think is deserving of a consideration and an opportunity. That’s a broad statement,” Newsom said.

Newsom spent most of his public speaking time attacking Elder, the media personality who has polled well above all other replacement candidates.

“In a matter of weeks, you quite literally could have a Republican sworn in as governor of California by the name of Larry Elder, who not only doesn’t believe in a woman’s right to choose, but as Dolores (Huerta) said, doesn’t even believe in a minimum wage, thinks it should be zero, let the market decide,” Newsom said.

Elder in Fresno, Too

Elder met with Fresno area farmers at the Picadilly Inn Airport on Thursday morning to share his views on the issues.

While he talked about crime and jobs, his big focus was on increasing water storage for parched California. One proposal: Suspend the state’s Environmental Quality Act so that dams can be enlarged and new reservoirs built.

President Joe Biden will campaign with Newsom on Monday in Long Beach.

Los Angeles Schools Mandate Vaccine for All Students 12 and Up