Inside the Weidert Parole Hearing. How a Fresno Murderer Gained His Freedom. 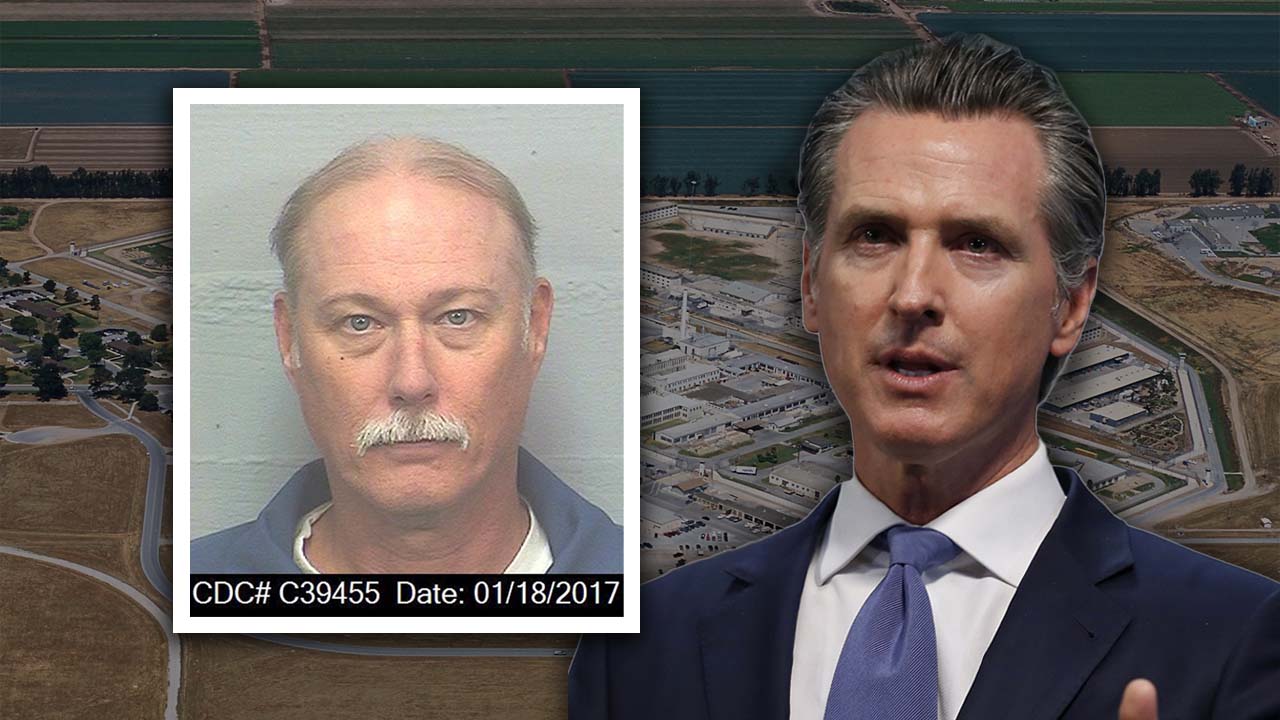 In his 10th parole hearing, a convicted murderer in one of Fresno County’s most heinous crimes has found his freedom from prison.

David Weidert was granted parole at a hearing on April 8. Gov. Gavin Newsom had until last Friday to reverse the decision, a move that he and his predecessor Jerry Brown had used three times in the past.

But, Newsom did not intervene this time. Prison officials say Weidert will be released within 10 days in San Francisco County from the Correctional Training Facility in Soledad. The exact day and manner of his release will not be made public because of security reasons.

Weidert was convicted of the Nov. 21, 1980 kidnapping and murder of 20-year old Michael Morganti. The motivation, according to court documents, was to prevent Morganti from speaking to police about a burglary the two committed at a doctor’s office five months prior.

In April of this year, Weidert told the latest panel to hear his parole request that he has worked on empathy with the help of self-help programs. He said they included anger management control, substance abuse programs — though he says he does not have substance abuse problems and just wanted to learn the 12 steps — and cognitive behavioral therapy, as well.

A December 1980 Fresno Bee story on the arrest of David Weidert.

‘I Wish I Could Undo It’

When Newsom reversed Weidert’s parole in 2020, he wrote “I do not believe that Mr. Weidert has accepted full responsibility… I am also troubled that even 40 years after Mr. Weidert committed the offense, he continues to show an underdeveloped sense of remorse for the sufferings he caused.”

Newsom also wrote, “I find the evidence shows that he currently poses an unreasonable danger to society if released from prison at this time.”

During the three and a half hour April hearing, the parole panel probed Weidert on the crime, why he did it, and his current reflections.

“It’s regrettable. I wish I could undo it. The best I can tell you is the way I’m living my life now is the life of amends,” Weidert said.

“Remorse is your life of amends, and it is understanding, empathy, understanding what you’ve done, what you’re responsible for. And I’ve focused on that,” Weidert told the parole board.

Weidert described “living amends” as giving to charity drives “and that’s in Michael Morganti’s honor that I do this, and there’s nothing that should take priority in my daily life that doesn’t remember what I did on that day.”

In his 2020 letter, Newsom noted Weidert’s inconsistency in the motivation for the crime. In prior hearings, Weidert said he didn’t intend to kill Morganti when taking him to a remote area near Pine Flat Lake. He also implied his accomplice was to blame.

The point was brought up at the April hearing by Fresno County Deputy District Attorney Ron Wells, in his argument opposing release.

Weidert explained his differing answers at prior parole hearings.

“I was in a process of accepting everything in this crime I was responsible for throughout the time I’ve been in prison. And there were points in time that I was not truthful with others and I wasn’t truthful with myself what exactly I was responsible for and when. Today I’m here to tell you that it was entirely premeditated. What I have said in previous parole hearings was not accurate until recent times,” Weidert said.

In his closing statement, Weidert apologized to Morganti’s family and others affected by the murder.

“I take full responsibility for my actions,” Weidert said. 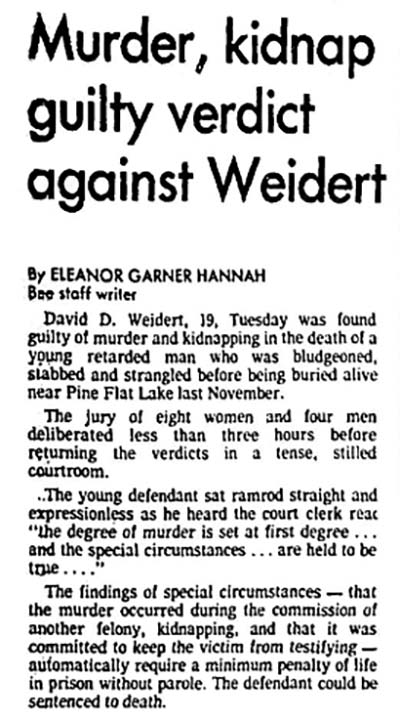 The Fresno Bee story in Oct. 1981 about Weidert’s conviction.

Weidert told the parole panel that he knew right from wrong when he burglarized a doctor’s office he cleaned as a janitor in June 1980. Just 17-years-old (he was 18 at the time he killed Morganti), he recruited Morganti to help him. The two were already acquainted and happened to run into each other the night of crime.

He also admitted that he took advantage of Morganti’s mental disability. Weidert said he regretted that he manipulated Morganti, “but that’s the kind of guy I was at that age,” Weidert told the parole panel.

“18-year-old David Weidert was a self-centered person who had entitlement issues and was going to get what he wanted, regardless of how it impacted those around him,” Weidert said. He said he had “several narcissistic characteristics,” and he didn’t understand he couldn’t control every situation.

Weidert said he developed that attitude because his family moved around several times as a youth. His father was a government official with the U.S. Department of Agriculture.

He felt things “were regularly taken away” and he didn’t want to have his freedom taken away with the burglary investigation. Given that he was a juvenile at the time of the burglary and a first-time offender, he would have likely received probation, a deputy district attorney testified in 1981.

Since his last parole hearing in 2019, Weidert said most educational programs had shut down because of COVID, but he has taken correspondence classes in humanities from UC Santa Barbara, attends a Bible study, and “Prep” (self-help) courses.

Asked how he coped with the reversal of his 2019 parole release, he replied “you just keep moving forward.”

A Rebuttal from the Prosecution

Wells, in offering a rebuttal, called out Weidert’s changing versions during prior hearings.

“This character is akin to that of a chameleon, trying to change his appearance to suit its needs,” Wells said.

Cathy Groves, Morganti’s mother, told the parole board that even if prison has made Weidert a better person, he should remain behind bars.

“I think we should leave him there… He took my son’s life. Why should he be allowed to walk this earth as a free man? He is a murderer,” she said.

“My concern is that you let this guy out, he preys on the weakest in society. That’s who he takes advantage of,” Vanduyne said.

After 22 minutes of deliberation, they found Weidert does not pose a reasonable threat to public safety, a conclusion reached by three previous panels.

Still, the parole board  acknowledged the savagery of the murder. “It’s very difficult to get past the horrific and gruesome nature of the life crime, Taira said. “So that will always be an aggravating factor.”

Following Supreme Court decisions, those historic considerations cannot be part of a “current threat” consideration because of how long ago — 40 years — the crime was committed.

However, Weidert’s age when he committed the murder was a factor. Weidert did not have the brain development at 18-years-old to truly understand the consequence of his crime, Taira said.

“We gave great weight (that) the level of self-reflection wasn’t perfect but Mr. Weidert does understand, recognizes his  character defects at the time versus how he is today,” Taira said.

Taira called Weidert’s remorse and responsibility “to be sufficient.”

Out of 10 Parole Hearings, 6 Denials 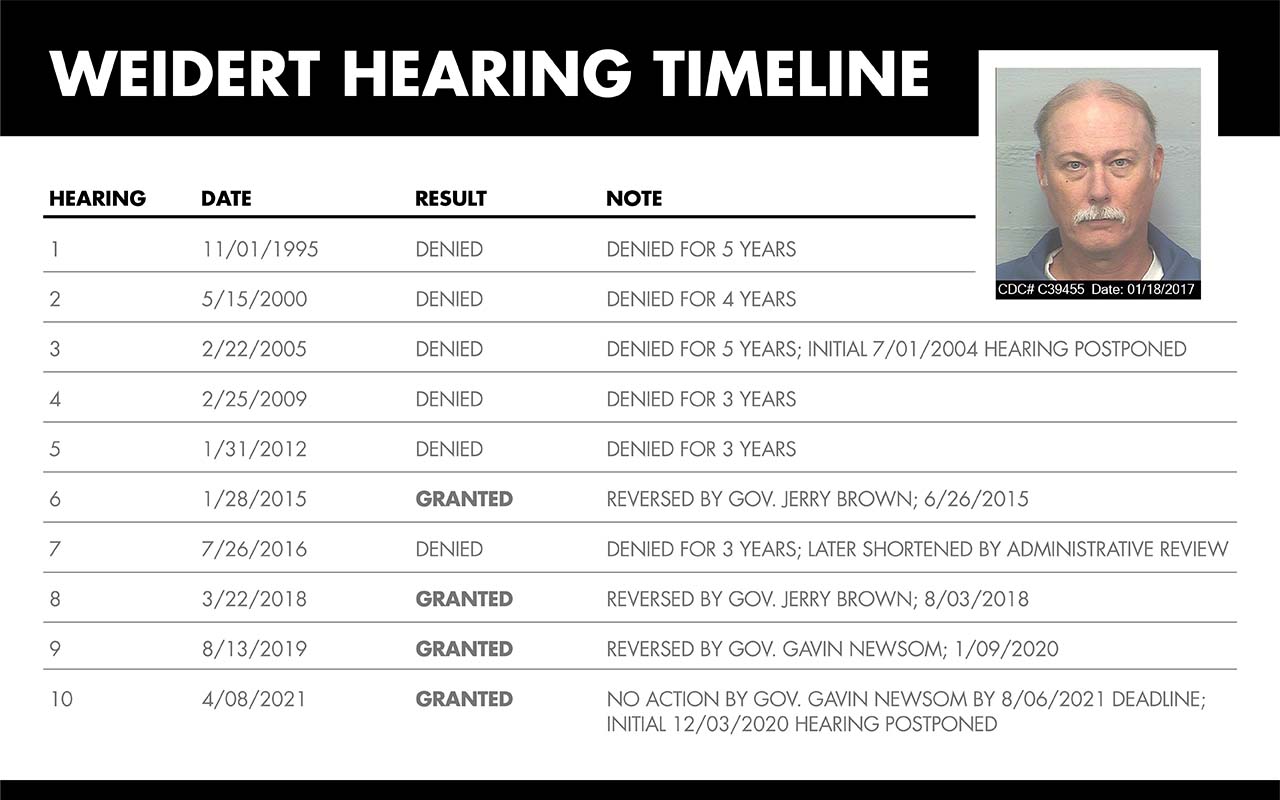 Weidert was sentenced to life without parole in 1981. The prosecution did not ask for the death penalty. In 1985, a majority decision by the state Supreme Court, led by Chief Justice Rose Bird, reduced the sentence to 25 years to life.

Because of credits for time served and good behavior as mandated by state law, Weidert became eligible for parole in 1995.

At his sixth hearing in 2015, the board granted Weidert parole. It was reversed five months later by then-Gov. Jerry Brown.

By law, after a reversal, the next parole hearing has to take place in 18 months. In 2016, the board denied Weidert and stipulated a three-year wait until the next hearing.

At his 10th hearing, the board granted Weidert parole for the fourth time. This time, there was no reversal.

Newsom’s lack of action has angered many local elected leaders. Both Republicans and Democrats questioned the decision.

A statement from the governor’s office confirmed that Newsom took no action, but it did not explain why.

“It is pathetic that Gavin Newsom is putting his politics, and quest for personal power, over the desires of this victim’s family,” Smittcamp said.

“There’s work for us in the legislature to do to make sure that people like him don’t get out. The crime that was committed was horrendous. This is not justice for the family,” state Senator Melissa Hurtado, D-Sanger, said.

After the burglary in June 1980, the doctor suspected the cleaning crew. Weidert wanted to keep Morganti quiet.

Weidert initially considered hiring someone to kill Morganti, but nothing came of it. On the morning of Nov. 21, 1981, Weidert recruited John Arbigast — then a juvenile who was granted immunity for his testimony — to help him carry out the murder.

The two men waited outside Morganti’s Clovis apartment, discussing how to carry out the murder. They would go to a secluded area, stab him and beat him with a baseball bat.

Arbigast lured Morganti out of the apartment, and forced him into Weidert’s truck.

A narrative in a 1985 state Supreme Court decision described what happened next.

“Defendant pulled a knife from his pocket and ordered Morganti into defendant’s truck. After stopping once to enable defendant to wire Morganti’s hands behind his back, the trio drove to an isolated mountain area. Defendant grabbed his shovel and ordered Morganti to start digging. After the hole was dug, defendant made Morganti lie in it and, thereupon, began to strike him in the head with a baseball bat. Defendant passed the bat to John, who (at defendant’s request) hit Morganti and then backed away. Defendant asked for John’s knife and, as John turned away once more, he heard Morganti scream.

“The assailants buried their victim in the shallow grave but, as defendant was walking across it, Morganti’s hand emerged and grabbed defendant’s leg. After Morganti’s head emerged from the dirt, defendant wrapped a piece of wire around Morganti’s neck and attempted to strangle him into submission. Finally, after Morganti’s struggles ceased, defendant hit him in the groin area with the baseball bat and, observing no response, reburied him and left the area. The evidence indicated that Morganti died of suffocation. No formal proceedings with respect to the Edwards burglary (the doctor’s office) had been initiated at the time of Morganti’s death.”

Weidert told the parole board “it was a horrid, terrible day. Yes. And what we did was inexcusable by any standards.”

Related Topics:FeaturedGov. Gavin Newsom
Up Next