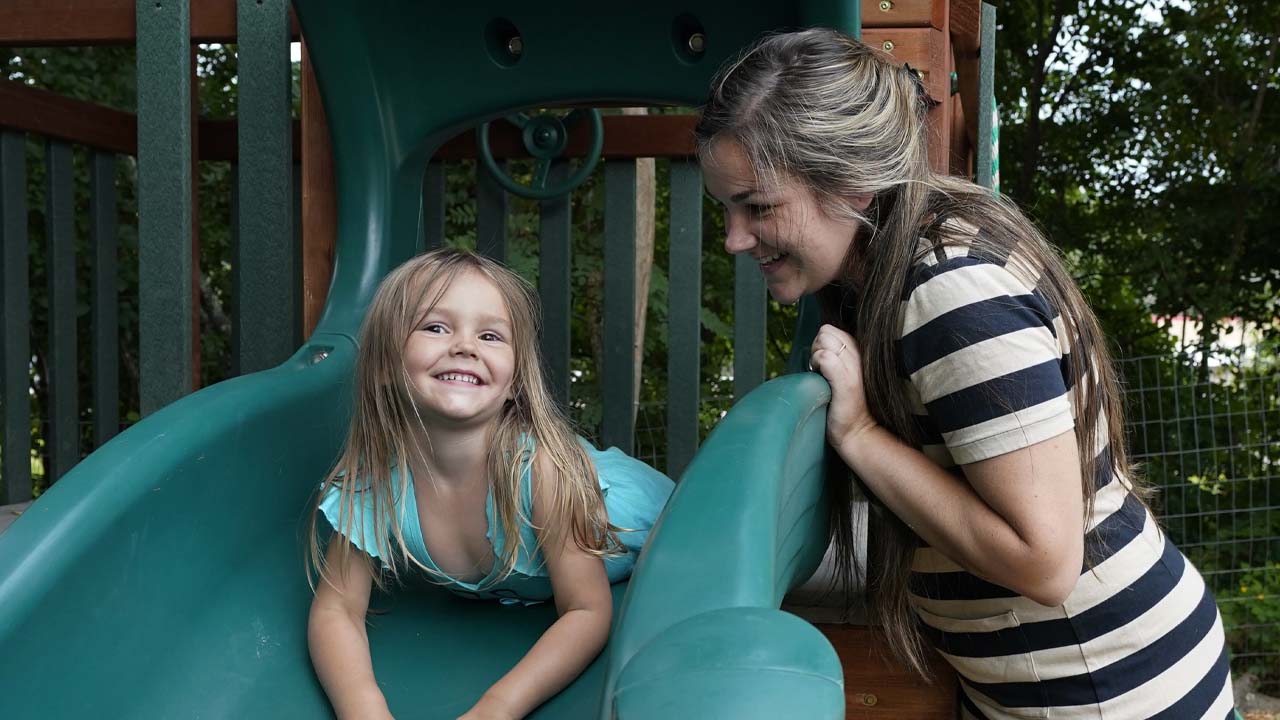 Brianne Walker plays with her 3-year-old daughter at a daycare in Brentwood, N.H. (AP Photo/Elise Amendola)
Share with friends

NASHUA, N.H. — Christina Darling finally replaced her 2006 Chevrolet Equinox after it broke down several times while picking her children up from day care. But the 31-year-old mother of two was struggling to keep up with the car payments.

Brianne Walker desperately wanted to take her three children and two siblings camping for the first time but wasn’t sure how she could pay for it. After all, she was behind on her rent, and day care and grocery costs were adding up.

Then, the two women from New Hampshire got a surprise in their bank accounts this month. They qualified for the expanded child tax credit, part of President Joe Biden’s $1.9 trillion coronavirus relief package. Families on average are getting $423 this month; the Treasury Department estimates that 35.2 million families received payments in July.

“The additional money does help alleviate the pressure,” said Walker, 29, who took custody of her two siblings last year after her mother overdosed. The $800 credit will help make up for losses she incurred after quitting a kitchen design job to care for the five youngsters, ages 3 to 19.

Biden increased the amounts going to families and expanded it to include those whose income is so little they don’t owe taxes. The benefits begin to phase out at incomes of $75,000 for individuals, $112,500 for heads of household and $150,000 for married couples. Families with incomes up to $200,000 for individuals and $400,000 for married couples can still receive the previous $2,000 credit.

In the past, eligible families got a credit after filing their taxes — either as a lump sum payment or a credit against taxes owed. But now six months of payments are being advanced monthly through the end of the year. A recipient receives the second half when they file their taxes. The credit is $3,600 annually for children under age 6 and $3,000 for children ages 6 to 17. Eligible families will receive $300 monthly for each child under 6 and $250 per older child.

“One of the problems with the big check in a year, if your car broke six months before, that is a long time to wait,” said Michael Reinke, executive director of the Nashua Soup Kitchen & Shelter, which serves many families making less than $26,000 a year.

“When people have money over a consistent period of time, it’s easier to make sure it’s going to the expenses you really need,” he said. “Sometimes, if you get it all at once, it’s hard to budget.”

Providing Money When People Need it the Most

Robin McKinney, co-founder and CEO of the CASH Campaign of Maryland, a Baltimore nonprofit organization that helps low-income residents file taxes, said the credit is providing people money in their pockets now, when they need it most.

“We know right now that peoples’ hours are down or they’re still struggling to get back to the same level of income that they had before, and this will create some stability for those families to know that over the next six months that they’re going to be getting this payment,” McKinney said.

If all the money goes out, the expectation is that could significantly reduce poverty — with one study estimating it could cut child poverty by 45%. And it comes at a time when unemployment benefits are being phased out and the federal eviction moratorium is set to expire Saturday.

The payments are also a test case of sorts. Biden ultimately would like to make them permanent — and the impact they have could go a long way to shaping that debate later this year.

“It infuses money into the family home,” said Suzanne Torregano, director of Family Services at Kingsley House in New Orleans, who estimated that 85%-90% of the parents the group serves are getting the monthly payments.

Still, some advocates argue the money may never reach the neediest because their incomes are so low they aren’t required to file a tax return, they don’t have a fixed address or bank account, or don’t have the internet savvy to apply.

“What we are finding is that homeless families … while many of them are eligible for the tax credit, they have significant barriers to obtaining it,” said Larry Seamans, president of FamilyAid Boston, which serves 900 families daily.

“We have some counter-intuitive struggles of families who may be unfamiliar with tax forms, tax laws and the fact that by filing a tax return, you can actually get money to support your family,” Seamans said.

“Many families … are not on the tax rolls. They now have to find sufficient documentation to prove that they are eligible.”

Most Spending Credit on Rent, Child Care, Groceries and Other Bills

Families who do receive the credit are mostly spending it on rent, child care and groceries, as well as catching up on cellphone and other bills. For Darling, the $550 she gets will go to car payments, more fresh produce and a babysitter so she can attend Nashua Board of Education meetings. She is running for a seat on the board. Eventually, she hopes to put money aside to save for a home with a yard.

“Every step closer we get to a livable wage is beneficial. That is money that gets turned around and spent on the betterment of my kids and myself,” said Darling, a housing resource coordinator who had been supplementing her $35,000-a-year salary with monthly visits to the Nashua Soup Kitchen and Shelter’s food pantry.

McKinney, who is married with a 5-year-old son and qualifies for the tax credit, is getting $167 a month. She said it’s all going to help pay for child care, which costs $288 a week.

“Right now, it’s out-of-school time because it’s the summer, so people have to pay for camps and babysitting support so that the parents can go to work,” said McKinney, of Columbia, Maryland. “I know a lot of people who are like: ‘This money is coming at just the right time, because this summer is more expensive for me for child care.’”

Many families in higher-income brackets who receive less money are socking it away for things like a family trip, school supplies or Christmas gifts.

Carleigh Steele, who received several hundred dollars, said the money is giving her peace of mind a month after she moved into a house in Baltimore with the help of Habitat for Humanity.

“It’s sitting in my bank account for all the home-buying things that I need, and for the rainy day fund for my house — just to make sure that I can keep myself economically stable,” said Steele, who has a 6-year-old daughter.

Brianne Epps, a mother of four from Jackson, Mississippi, is using the money to pay bills but also to finance her dream of opening a soul food catering business. “It will help me, for one, to promote my catering business — to get that off the ground,” she said.

Molly Vigeant, of East Hartford, Connecticut, a 25-year-old single mother who works as a special needs paraprofessional in a high school, hopes to spend the money to repair or replace her car. But she’s had trouble accessing a portal aimed at helping applicants and hasn’t yet received anything.

“It doesn’t hurt yet,” she said of the delayed payment. “But, it’s a 20-year-old car with over 200,000 miles on it and I make 20 grand a year. A new one is not going to fall from the sky, when your debt-to-income ratio is garbage and you know you can’t finance a car.”