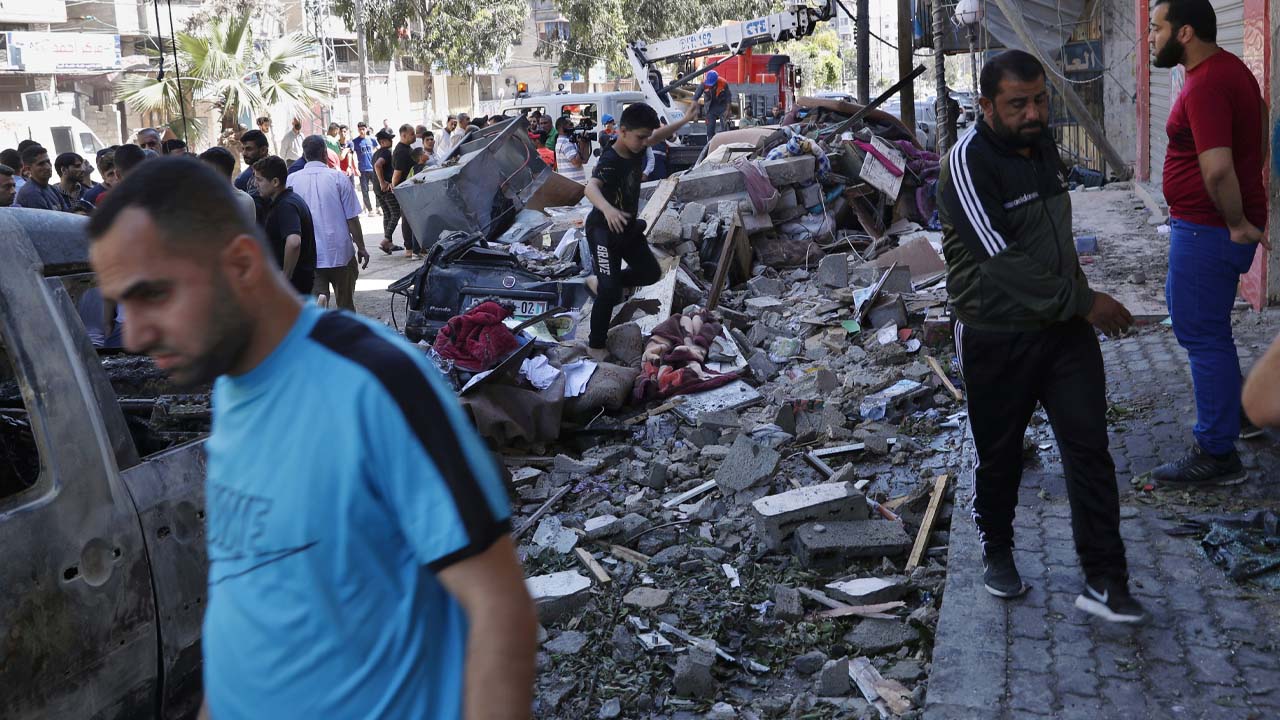 GAZA CITY, Gaza Strip — Israeli Prime Minister Benjamin Netanyahu on Wednesday vowed to press ahead with a fierce military offensive in the Gaza Strip, pushing back against calls from U.S. President Joe Biden to wind down the operation that has left hundreds dead.

Netanyahu’s tough comments marked the first public rift between the two close allies since the fighting began last week and could complicate international efforts to reach a cease-fire.

Netanyahu Presses Ahead Despite Biden’s Call for Ceasefire

After a visit to military headquarters, Netanyahu said he “greatly appreciates the support of the American president,” but said Israel will push ahead “to return the calm and security to you, citizens of Israel.”

He said he is “determined to continue this operation until its aim is met.”

He spoke shortly after Biden told Netanyahu “that he expected a significant de-escalation today on the path to a ceasefire,” the White House said.

Biden had previously avoided pressing Israel more directly and publicly for a cease-fire with Gaza’s Hamas militant rulers. But pressure has been ramping up on him to intervene more forcefully as other diplomatic efforts also gather strength.

Netanyahu has repeatedly vowed to press ahead with the operation, and his tough response to Biden signaled he had no intentions of stopping. In another sign of potential escalation, militants in Lebanon fired a barrage of rockets into northern Israel on Wednesday.

Egyptian negotiators have also been working to halt the fighting, and an Egyptian diplomat said that some of the country’s top officials are waiting for Israel’s response to a cease-fire offer. The diplomat spoke on condition of anonymity in line with regulations. Meanwhile, German Foreign Minister Heiko Maas said he hoped to fly to Israel for talks Thursday with Israelis and Palestinians.

Airstrikes from Both Israel and Hamas Continue

Earlier in the day, the Israeli military said it was widening its strikes on militant targets in southern Gaza to blunt continuing rocket fire from Hamas. At least nine people were killed in the Gaza Strip on Wednesday.

The current round of fighting between Israel and Hamas began May 10 when the militant group fired long-range rockets toward Jerusalem after days of clashes between Palestinian protesters and Israeli police at the Al-Aqsa Mosque compound, a flashpoint site sacred to Jews and Muslims. Heavy-handed police tactics at the compound and the threatened eviction of dozens of Palestinian families by Jewish settlers had inflamed tensions.

Since then, Israel has pounded Gaza with hundreds of airstrikes it says are targeting Hamas’ militant infrastructure, and Hamas and other militant groups embedded in residential areas have fired more than 3,700 rockets at Israeli cities, with hundreds falling short and most of the rest intercepted.

At least 227 Palestinians have been killed, including 64 children and 38 women, with 1,620 people wounded, according to the Gaza Health Ministry, which does not break the numbers down into fighters and civilians. Hamas and Islamic Jihad say at least 20 of their fighters have been killed, while Israel says the number is at least 130. Some 58,000 Palestinians have fled their homes.

Twelve people in Israel, including a 5-year-old boy, a 16-year-old girl and a soldier, have been killed.

On Wednesday, militants in Lebanon fired a barrage of rockets into northern Israel, threatening to open up a new front in fighting.

The rocket attack, which drew Israeli artillery fire in response but apparently did not cause any injuries, raised the possibility of dragging Israel into renewed conflict with the powerful Lebanese militant group Hezbollah to its north.

No one immediately claimed responsibility for the attack, and Hezbollah, which fought a monthlong war against Israel in 2006, has stayed out of the fighting for now.

But the barrage appears to be carefully calibrated to send a political message that the group, which has tens of thousands of missiles, could join the battle at any time. Israel considers Hezbollah to be its most formidable threat, and has threatened widespread destruction in Lebanon if war were to erupt.

The rockets are widely believed to be fired by Palestinian factions based in south Lebanon. But they cannot operate without Hezbollah’s tacit consent.

A Scene of Panic With Civilian Casualties

In the Gaza Strip, one of the Israeli airstrikes destroyed the home of an extended family.

Residents surveyed the piles of bricks, concrete and other debris that had once been the home of 40 members of al-Astal family in the southern Gaza town of Khan Younis. They said a warning missile struck the building five minutes before the airstrike, allowing everyone to escape.

Ahmed al-Astal, a university professor, described a scene of panic, with men, women and children racing out of the building. Some of the women didn’t even have time to cover their hair with Muslim headscarves, he said.

“We had just gotten down to the street, breathless, when the devastating bombardment came,” he said. “They left nothing but destruction, the children’s cries filling the street. … This is happening, and there is no one to help us. We ask God to help us.”

The Israeli military said it struck a militant tunnel network around the towns of Khan Younis and Rafah, with 52 aircraft hitting 40 underground targets.

Among the nine people killed Wednesday was a reporter for Hamas-run Al-Aqsa radio and two people who died when warning missiles crashed into their apartment.

Military officials, meanwhile, said a mysterious explosion that killed eight members of a Palestinian family on the first day of the fighting was caused by a misfired rocket from Gaza. “This wasn’t an Israeli attack,” said Lt. Col. Jonathan Conricus, a military spokesman.

Since the fighting began, Gaza’s infrastructure, already weakened by a 14-year blockade, has rapidly deteriorated. Medical supplies, water and fuel for electricity are running low in the territory, on which Israel and Egypt imposed the blockade after the Islamic militant group Hamas seized power in 2007.

Israeli attacks have damaged at least 18 hospitals and clinics and destroyed one health facility, the World Health Organization said. Nearly half of all essential drugs have run out.

The Gaza Health Ministry said it had salvaged coronavirus vaccines after shrapnel from an Israeli airstrike damaged the territory’s only testing facility, which also administered hundreds of vaccines. The operations were relocated to another clinic.

Dr. Majdi Dhair, head of preventive medicine at the ministry, said the territory was already struggling to recover from a coronavirus wave that hit in February, with more than 4,200 active cases. At least 986 people have died from COVID-19 in Gaza, which only has enough supplies to vaccinate some 55,000 people out of a population of 2 million.

Among the buildings leveled by Israeli airstrikes was one housing The Associated Press’ Gaza office and those of other media outlets.

Netanyahu alleged that Hamas military intelligence was operating in the building. Secretary of State Antony Blinken said Tuesday that Israel had given the U.S. information about the bombing, without elaborating.

The AP has called for an independent investigation. The news organization’s president, Gary Pruitt, has said the AP had no indication Hamas was present in the building and that “this is something we check as best we can.”

The fighting, the worst since a 2014 war between Israel and Hamas, has ignited protests around the world and inspired Palestinians in Israel and the occupied territories to call a general strike Tuesday. It was a rare collective action that spanned boundaries central to decades of failed peace efforts. Israel captured the West Bank, east Jerusalem and Gaza in the 1967 Mideast war, territories the Palestinians want for their future state.