Afghans Who Helped the US Now Fear Being Left Behind 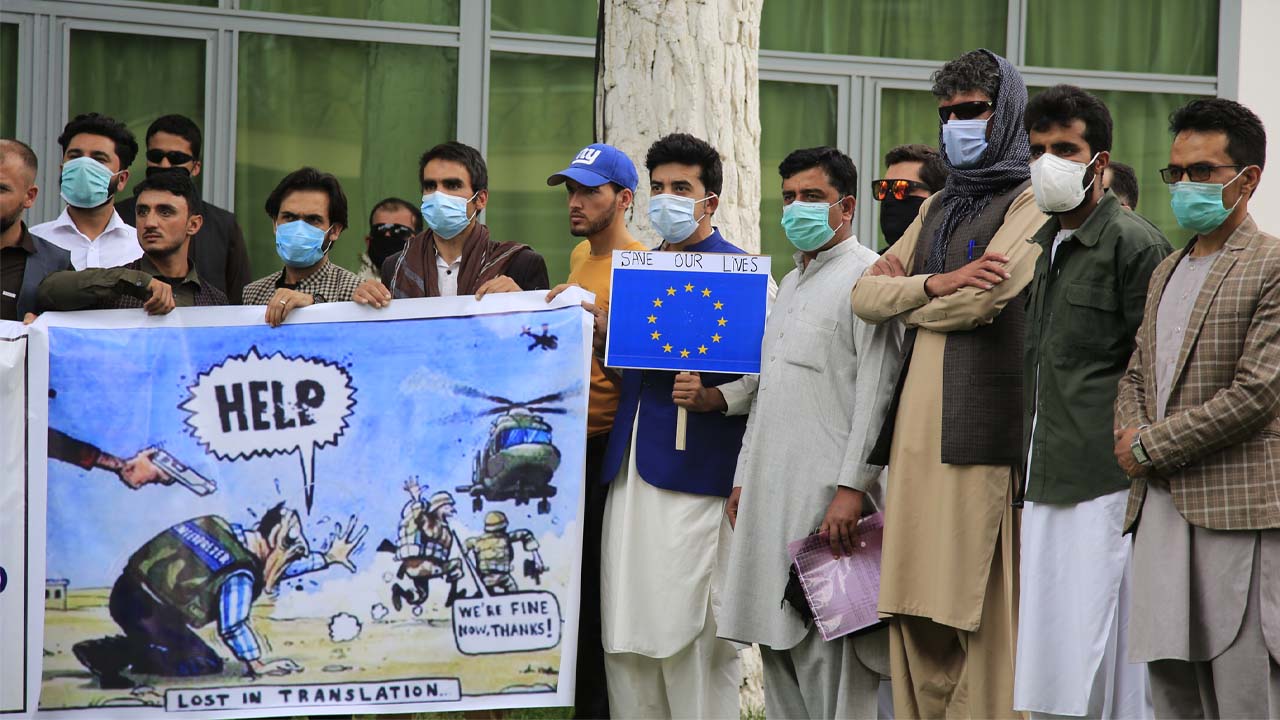 KABUL, Afghanistan — He served as an interpreter alongside U.S. soldiers on hundreds of patrols and dozens of firefights in eastern Afghanistan, earning a glowing letter of recommendation from an American platoon commander and a medal of commendation.

Still, Ayazudin Hilal was turned down when he applied for one of the scarce special visas that would allow him to relocate to the U.S. with his family. Now, as American and NATO forces prepare to leave the country, he and thousands of others who aided the war effort fear they will be left stranded, facing the prospect of Taliban reprisals.

“We are not safe,” the 41-year-old father of six said of Afghan civilians who worked for the U.S. or NATO. “The Taliban is calling us and telling us, ’Your stepbrother is leaving the country soon, and we will kill all of you guys.'”

Interpreters and Others Who Aided the U.S. at Risk

The fate of interpreters after the troop withdrawal is one of the looming uncertainties surrounding the withdrawal, including a possible resurgence of terrorist threats and a reversal of fragile gains for women if chaos, whether from competing Kabul-based warlords or the Taliban, follows the end of America’s military engagement.

Interpreters and other civilians who worked for the U.S. government or NATO can get what is known as a special immigrant visa, or SIV, under a program created in 2009 and modeled after a similar program for Iraqis.

Both SIV programs have long been dogged by complaints about a lengthy and complicated application process for security vetting that grew more cumbersome with pandemic safety measures.

U.S. Secretary of State Antony Blinken told reporters last month that the U.S. is committed to helping interpreters and other Afghan civilians who aided the war effort, often at great personal risk. The Biden administration has also launched a review of the SIV programs, examining the delays and the ability of applicants to challenge a rejection. It will also be adding anti-fraud measures.

Amid the review, former interpreters, who typically seek to shield their identities and keep a low profile, are becoming increasingly public about what they fear will happen should the Taliban return to power.

“They absolutely are going to kill us,” Mohammad Shoaib Walizada, a former interpreter for the U.S. Army, said in an interview after joining others in a protest in Kabul.

At least 300 interpreters have been killed in Afghanistan since 2016, and the Taliban have made it clear they will continue to be targeted, said Matt Zeller, a co-founder of No One Left Behind, an organization that advocates on their behalf. He also served in the country as an Army officer.

“The Taliban considers them to be literally enemies of Islam,” said Zeller, now a fellow at the Truman National Security Project. “There’s no mercy for them.”

Members of Congress and former service members have also urged the U.S. government to expedite the application process, which now typically takes more than three years. State Department spokesperson Ned Price said May 10 that the U.S. Embassy in Kabul had temporarily increased staff to help process the visas.

In December, Congress added 4,000 visas, bringing the total number of Afghans who can come with their immediate family members to 26,500, with about half the allotted amount already used and about 18,000 applications pending.

Critics and refugee advocates said the need to relocate could swell dramatically if Afghanistan tumbles further into disarray. As it is, competing warlords financed and empowered by U.S. and NATO forces threaten the future along with a resurgent Taliban, which have been able to make substantive territorial gains against a poorly trained and poorly equipped Afghan security force largely financed by U.S. taxpayers.

“While I applaud the Biden administration’s review of the process, if they are not willing to sort of rethink the entire thing, they are not going to actually start helping those Afghans who are most at need,” said Noah Coburn, a political anthropologist whose research focuses on Afghanistan.

Coburn estimates there could be as many as 300,000 Afghan civilians who worked for the U.S. or NATO in some form over the past two decades.

“There is a wide range of Afghans who would not be tolerated under the Taliban’s conception of what society should look like,” said Adam Bates, policy counsel for the International Refugee Assistance Project.

Those fears have been heightened by recent targeted killings of journalists and other civilians as well as government workers. The Islamic State affiliate in Afghanistan has claimed responsibility for several, while the Taliban and government blame each other.

Biden raised the nation’s overall cap on refugee admissions to 62,500 this month, weeks after facing bipartisan blowback for his delay in replacing the record low ceiling set by his predecessor, Donald Trump.

The U.S. is not planning to move civilians out en masse, for now at least. “We are processing SIVs in Kabul and have no plans for evacuations at this time,” a senior administration official said.

The White House is in the beginning stages of discussing its review with Congress and will work with lawmakers if changes in the SIV program are needed “in order to process applications as quickly and efficiently as possible, while also ensuring the integrity of the program and safeguarding national security,” the official said, speaking on condition of anonymity to discuss internal deliberations.

Former interpreters have support in Congress, in part because many also have former American troops vouching for them.

Walizada, for example, submitted a letter of support from an Army sergeant who supervised him in dozens of patrols, including one where the interpreter was wounded by Taliban gunfire. “I cannot recall a linguist who had a greater dedication to his country or the coalition cause,” the sergeant wrote.

Walizada was initially approved for a visa, but it was later revoked, with U.S. Citizenship and Immigration Services telling him that it had “adverse information you may be unaware of,” in a letter he provided to The Associated Press. Walizada said he has appealed the decision and hasn’t received a response.

Hilal, who translated from Dari and Pashto to English for the Army from June 2009 to December 2012, was rejected by the U.S. Embassy, which said he did not meet the requirement for “faithful and valuable service,” because he was fired by the contracting firm that hired him after 3 1/2 years of service.

It was a stinging response, considering the dangers he faced. “If I haven’t done faithful and good service for the U.S. Army, why have they given me this medal?” he says, holding the commendation, in an AP interview at an office in Kabul used by the former interpreters to meet with journalists.

Why he was fired by the U.S.-based contractor, Mission Essential, is unclear. Hilal said he had a conflict with supervisors that started with a dispute over a work assignment. The company says it does not discuss current or former employees and declined to comment.

But whatever happened eventually, a November 2019 letter of support from his platoon commander was highly complimentary of “stellar” service that “rivals that of most deployed service members.”

Hilal was by his side on hundreds of patrols and dozens of firefights, monitoring enemy radio traffic and interpreting during encounters with locals, Army Maj. Thomas Goodman said in the letter.

“He was dependable and performed admirably,” Goodman wrote. “Even in firefights that lasted hours on end, he never lost his nerve, and I could always count him to be by my side.”

As it happens, an AP journalist was embedded with the unit for a time, amid intense fighting in eastern Afghanistan, and captured images of Hilal and Goodman, surrounded by villagers as American forces competed with the Taliban for the support of the people.

Goodman said he stands by his recommendation but declined to comment further.

Coburn, who interviewed more than 150 special immigrant visa recipients and applicants for a recently released study of the program, said Hilal’s denial reflects a rigid evaluation process. “There is no nuance to the definition of service,” he said. “You either served or you didn’t serve.”

The special immigration visa program allows applicants to make one appeal, and many are successful. Nearly 80% of 243 Afghans who appealed in the first quarter of 2021 were subsequently approved after providing additional information, according to the State Department. Hilal says his appeal was rejected.

Bates, of the International Refugee Assistance Project, says the fact that there is a U.S. Army officer willing to support should count for something. “Even if he doesn’t qualify for the SIV program, this plainly seems like someone who is in need of protection,” he said.