The Latest: Israeli Police Call Curfew on Lod After Clashes 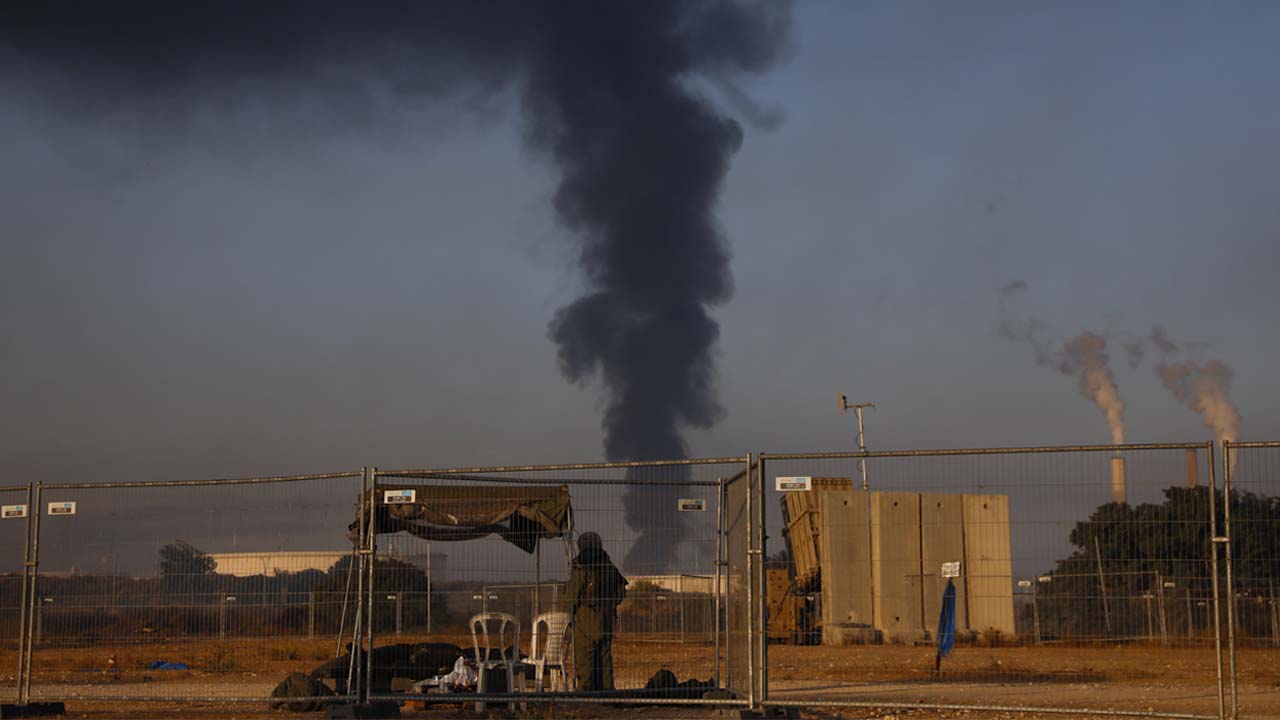 The Latest on confrontations between Israelis and Palestinians as Israel signals a widening military campaign:

JERUSALEM — Israeli police are imposing a nighttime curfew on a central city that was the scene of unrest in recent days.

Police said in a statement on Wednesday that officers would enforce the ban on people entering the city of Lod, residents leaving their homes, and people in public spaces starting at 8 p.m.

Lod has seen two nights of violent protests, including the torching of dozens of vehicles, a synagogue, and violent clashes between Arab protesters and police. Israeli authorities declared a state of emergency in the city and deployed Border Police forces.

BELGRADE, Serbia — Dozens of Palestinians living in Belgrade have staged a protest in the Serbian capital over an escalation in fighting in the Gaza Strip in recent days.

The protesters on Wednesday gathered at Belgrade’s Republic Square to draw public attention to the conflict that has surged after weeks of violence in Jerusalem.

The latest Mideast fighting is rooted in a long dispute over contested Jerusalem. After Hamas rained rockets inside Israel on Monday, the conflict suddenly erupted and now increasingly resembles the 2014 Gaza war.

GAZA CITY, Gaza Strip — Palestinian militant group Hamas has confirmed that its Gaza City commander was killed in an Israeli airstrike on Wednesday.

Bassem Issa was the highest-ranking military figure in Hamas to be killed Israel since 2014. Wednesday’s statement was the first time Hamas acknowledged the death of militants in this round of fighting with Israel.

The armed wing of Hamas said Issa was killed “along with a few of his fellow brothers of leaders and holy fighters” during the fighting that has been going on for two days in Gaza.

Israel’s internal security agency said a series of airstrikes had killed Issa and several other senior Hamas militants, including the head of rocket development and cyber warfare, the head of rocket production, and the Hamas engineering chief.

Issa and several other commanders responsible for the different districts of the Gaza Strip formed Hamas’ military council, the highest body deciding on the group’s militant operations. The military council is headed by Mohammed Deif.

LONDON — Prime Minister Boris Johnson says he wants to see an “urgent de-escalation of tensions” between Israel and Hamas amid the most severe outbreak of violence since the 2014 Gaza war.

Johnson tweeted on Wednesday that the United Kingdom is “deeply concerned” and urged leaders to “step back from the brink.”

He was one of many leaders around the world offering up advice after longtime tensions in contested Jerusalem erupted into rocket-fire from the Gaza Strip and an intense response from Israel.

British Foreign Office Minister James Cleverly told Parliament that Britain “unequivocally condemns the firing of rockets at Jerusalem and other locations in Israel.” He called Hamas’ conduct “terrorism” and called on militants to “end their incitement and rocket fire against Israel.”

Cleverly said Israel has a “legitimate right to self-defense,” but added that in doing so, ”it is vital that all actions are proportionate, in line with international humanitarian law and make every effort to avoid civilian casualties.”

JERUSALEM — Israel’s firefighting service says it has almost completely extinguished a blaze at a petroleum facility in southern Israel that was set alight by a rocket fired by Hamas militants.

The rocket landed Tuesday night near a Petroleum and Energy Infrastructures Ltd. facility south of Ashkelon during a major barrage by Gaza militants. The result was a massive fire in a storage tank that blazed through the night and into Wednesday.

Israel Fire and Rescue Services said that 20 teams have been working for 25 hours to extinguish the inferno that issued a column of thick black smoke. Israeli state-owned Petroleum and Energy Infrastructures said the fuel had been transferred to another storage facility.

On Wednesday, the plume of smoke was still rising over Ashkelon. Israeli health and environment officials have instructed residents of the area to avoid prolonged periods outdoors.

JERUSALEM — Israel’s president says the country’s Arab leaders are “giving support to terrorism and rioting” by staying quiet about an outbreak unrest in mixed communities.

Reuven Rivlin said on Wednesday that the “silence of the Arab leadership” over violence in mixed Jewish-Arab communities amounts to “encouraging the rupture of the society” amid the most severe outbreak of violence since the 2014 Gaza war.

Rivlin says Israel “must pursue the rioters with a firm hand (to) restore security and order to all of us, also while fighting terrorism from Gaza without compromise.”

The unrest that began at the Al-Aqsa Mosque in Jerusalem has spread across Israel itself. It comes after Hamas called for a full-scale Palestinian intifada, or uprising.

In the Israeli city of Lod, a 52-year-old Arab Israeli and his 16-year-old daughter were killed early Wednesday when a rocket landed in the courtyard of their one-story home.

Lod also saw heavy clashes after thousands of mourners joined a funeral for an Arab man who was killed the previous night, the suspect a Jewish gunman. Israeli media reported that the crowd fought with police, and set a synagogue and some 30 vehicles on fire.

JERUSALEM — The Israeli military says it has killed several senior Hamas militant commanders in airstrikes in Gaza and Khan Younis.

The army released a statement on Wednesday, saying that it carried out a “complex and first-of-its-kind operation.” Those targeted, it said, were “a key part of the Hamas ‘General Staff’” and considered close to the head of the group’s military wing.

JERUSALEM — Prime Minister Benjamin Netanyahu says Israel will use “an iron fist if needed” to stop widespread protests by Arab citizens that have resulted in injuries, arrests, and property damage.

Netanyahu said on Wednesday that Israel will “stop the anarchy” after deploying Border Police forces to calm unrest in recent days in the cities of Lod and Acre.

The mounting unrest comes after weeks of violence in Jerusalem and heavy fighting between Israel and Hamas militants in the Gaza Strip in recent days. The fighting is rooted in a long dispute over contested Jerusalem. After Hamas rained rockets inside Israel on Monday, the conflict suddenly erupted and increasingly resembles the 2014 Gaza war.

Netayahu says Israel will “stop the anarchy and restore governance to the cities of Israel, with an iron fist if needed, with all forces needed and all authorities required.”

BERLIN — Germany is standing by Israel during the most intense fighting since the 2014 Gaza war.

Justice Minister Christine Lambrecht on Wednesday condemned the rocket attacks on Israel from Gaza, saying Germany is standing “strongly on the side of Israel.” She called for the attacks on Israel to stop, adding that Israel has the right to protect itself.”

Lambrecht also denounced anti-Semitic acts near synagogues in Germany. She said a spate of Israeli flag-burning and other acts at a time of “agony” for Israel shows “nothing but horrible disrespect for human dignity.”

German news agency dpa reported that police stopped 13 suspects late Tuesday in the western city of Muenster near a synagogue after an Israeli flag was burned there.

Police said that in the western city of Bonn, several people damaged the entrance of a synagogue with stones. Investigators found a burned flag there as well. And in nearby Duesseldorf, somebody burned garbage on top of a memorial for a former synagogue. The justice minister vowed that “the perpetrators must be found and held responsible and Jewish institutions must be protected thoroughly.”

ANKARA, Turkey — Turkish President Recep Tayyip Erdogan has told Russian President Vladimir Putin that the international community should “give Israel a strong and deterrent lesson” over its conduct toward the Palestinians.

That’s according to the Turkish Presidential Communications Directorate, which said the two leaders talked by phone on Wednesday about the escalating confrontation sparked by tension over contested Jerusalem.

Meanwhile, thousands of people in Istanbul defied a nationwide coronavirus curfew late on Tuesday to demonstrate against Israel’s attacks. A large convoy of cars drove toward the Israeli Consulate, waving Turkish and Palestinian flags. An image of the Palestinian and Turkish flags was projected onto the Israeli building.

ISLAMABAD, Pakistan — Pakistan has condemned Israel’s actions and called for Muslim nations to stand by the Palestinians.

Protesters are expected to hold a small anti-Israel rally later today in the southern city of Karachi.

GAZA CITY, Gaza Strip — The Gaza Health Ministry says the death toll from Israeli airstrikes on Gaza has climbed to 43, including 13 children and three women.

It says nearly 300 Palestinians in the territory have been wounded in the strikes.

The strikes began on Monday after Palestinians launched a barrage of rockets into Israel. The worst fighting since the 2014 Gaza war was ignited by clashes in Jerusalem in recent weeks between Palestinian protesters and Israeli police focused on the Al-Aqsa Mosque compound, a site sacred to Jews and Muslims.

The head of Israel’s emergency service also says one person has been killed and one seriously wounded by an anti-tank missile fired from the Gaza Strip.

JERUSALEM — The head of Israel’s emergency service says one person has been killed and one seriously wounded by an anti-tank missile fired from the Gaza Strip.

Eli Bein of Magen David Adom said the Wednesday morning attack hit a jeep. Israeli media reported the assault. The attack came after a night of deadly exchanges of rocket fire between Israel and Palestinians. It was an abrupt escalation of weeks of tension with roots in disputed Jerusalem.