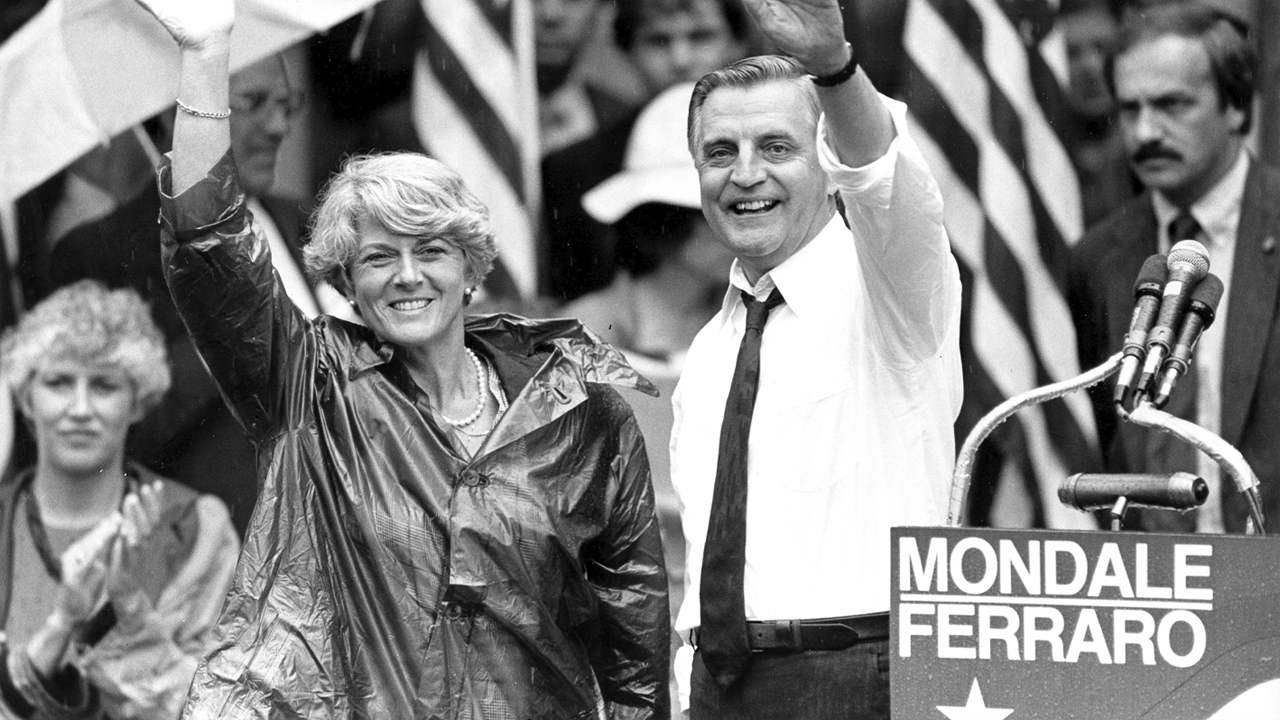 It was a sign of respect for a man many Americans remember largely for his near-shutout defeat for the White House in 1984. But well after his bruising loss, Mondale remained a revered liberal elder — with a list of accomplishments that are still relevant today.

As a young senator, he co-wrote the Fair Housing Act of 1968, a pillar of federal civil rights legislation. He later engineered a 1975 bipartisan deal that ended the two-thirds rule for stopping filibusters, so that 60 senators instead of 67 could cut off debate.

Under President Jimmy Carter, he became the first vice president with a day job, as adviser to the president, not just a bystander. He called it the “executivization” of the vice presidency.

And as a Democratic presidential nominee, he chose the first female nominee for vice president from a major party.

Harris, who won the job 36 years later, specifically thanked him for all he did to change the office, according to a person familiar with the calls who asked for anonymity to discuss the private conversations.

Mondale, 93, died Monday at his home in Minneapolis, as the city awaits a verdict in a murder trial that has forced the nation to again wrestle with structural racism. He welcomed that debate, his family said in a statement: “We are grateful that he had the opportunity to see the emergence of another generation of civil rights reckoning in the past months.”

Mondale was appointed senator from Minnesota to succeed his political mentor, Hubert H. Humphrey, who resigned to become vice president. He won Senate elections in 1966 and 1972, and stepped down to become vice president in 1977. Carter lost to Ronald Reagan in 1980 and Mondale went into private law practice — while beginning his own campaign for the presidency. He won the nomination in 1984, chose Rep. Geraldine Ferraro of New York as his running mate, and was crushed in the landslide that reelected Reagan, carrying only Minnesota and the District of Columbia.

Mondale was ambassador to Japan from 1993 until 1996. In 2002, at 74, he was drafted for a political reprise, running a truncated campaign for the Senate after Sen. Paul Wellstone, the Democratic nominee, was killed in a plane crash shortly before the election. Mondale was favored at first, but he lost the election.

And it cost him one record that had consoled him in earlier defeat — until then, he had won every time he was on the ballot in Minnesota. Instead, he got another, unwanted, record: the only man to lose elections in each of the 50 states.

‘Not a Showman, Just Stable, Hardworking and Honest’

Even so, Mondale has some striking moments on television, none more so than in a 1984 campaign debate against Sen. Gary Hart of Colorado, whose primary upsets threatened Mondale’s front-runner standing for the Democratic nomination. “You know, when I hear your new ideas I’m reminded of that ad ‘Where’s the beef?’” he told Hart, using a fast-food chain’s slogan to question the substance of his rival’s campaign proposals.

Suddenly, the bland candidate had delivered a telling quip and created a slogan that stuck. It was no ad-lib and it wasn’t original — a Mondale campaign ally had used it before. But no matter, it was a boost as Mondale limped through the presidential primaries, losing more states than he won, but steadily gaining delegates to capture the nomination

Against the favored Reagan, Mondale’s best opening came when the president’s age, 73, became an issue. The president seemed disengaged and even confused in early campaign debates. Reagan undid that one with his own quip in the final debate. Asked about it, the president said: “I will not make age an issue of this campaign. I am not going to exploit for political purposes my opponent’s youth and inexperience.”

Mondale could only smile as the audience laughed. But he said later he was smiling through tears because he knew from that moment that his quest was hopeless.

Then there was the 1984 Mondale line Republicans made into a telling issue against him. In accepting his nomination, Mondale said that whoever won the election, taxes were going to be increased. “Let’s tell the truth,” he said. “Mr. Reagan will raise taxes and so will I. He won’t tell you. I just did.” Republicans translated that into a Mondale campaign promise to raise taxes. He said he was just being honest. His forecast was accurate.

Mondale, “Fritz” to some of his friends, was a dedicated liberal. He used the label in the subtitle of his 2010 memoir, “The Good Fight.” As attorney general of Minnesota and in the Senate, his major causes included civil rights, consumer protection, education, housing and the problems of migrant workers.

The son of a Methodist minister and a music teacher, Walter Frederick Mondale was born Jan. 5, 1928, in tiny Ceylon, Minnesota, and grew up in several small southern Minnesota towns.

He was only 20 when he served as a congressional district manager for Humphrey’s successful Senate campaign in 1948. His education, interrupted by a two-year stint in the Army, culminated with a law degree from the University of Minnesota in 1956.

Mondale began a law practice in Minneapolis and ran the successful 1958 gubernatorial campaign of Democrat Orville Freeman, who appointed Mondale state attorney general in 1960. Mondale was elected attorney general in the fall of 1960 and was reelected in 1962.

As Clinton’s ambassador to Japan from 1993-96 he fought for U.S. access to markets ranging from cars to cellular phones. He helped avert a trade war in June 1995 over autos and auto parts, persuading Japanese officials to give American automakers more access to Japanese dealers and pushing Japanese carmakers to buy U.S. parts.

Mondale kept his ties to the Clintons. In 2008, he endorsed Sen. Hillary Rodham Clinton for president, switching his allegiance only after Barack Obama sealed the nomination.

Mondale Stands in for Wellstone

In 2002, state and national Democrats looked to Mondale when Wellstone died less than two weeks before Election Day. Mondale was working at the Minneapolis law firm of Dorsey & Whitney — he returned to the firm after the brief campaign — and serving on corporate and nonprofit boards.

He agreed to stand in for Wellstone, and early polls showed him with a lead over the Republican candidate, Norm Coleman.

But the 53-year-old Coleman, emphasizing his youth and vigor, out-hustled the then-74-year-old Mondale in an intense six-day campaign. Mondale was also hurt by a partisan memorial service for Wellstone, in which thousands of Democrats booed Republicans politicians in attendance. One speaker pleaded: “We are begging you to help us win this election for Paul Wellstone.”

“The eulogizers were the ones hurt the most,” Mondale said after the election. “It doesn’t justify it, but we all make mistakes. Can’t we now find it in our hearts to forgive them and go on?”

Years after the 2002 defeat, Mondale returned to the Senate to stand beside Democrat Al Franken in 2009 when he was sworn in to replace Coleman after a drawn-out recount and court battle.

Mondale and his wife, Joan Adams Mondale, were married in 1955. During his vice presidency, she pushed for more government support of the arts and gained the nickname “Joan of Art.” She had minored in art in college and worked at museums in Boston and Minneapolis.

The couple had two sons, Ted and William, and a daughter, Eleanor. Eleanor Mondale became a broadcast journalist and TV host, with credits including “CBS This Morning” and programs with E! Entertainment Television; she died in 2011. Ted Mondale served six years in the Minnesota state Senate and made an unsuccessful bid for the Democratic nomination for governor in 1998, and William Mondale served for a time as an assistant attorney general. Joan Mondale died in 2014 at age 83 after an extended illness.

While he lacked the charisma of his mentor Humphrey, Walter Mondale had a droll sense of humor. When he dropped out of the 1976 presidential sweepstakes, he said, “I don’t want to spend the next two years in Holiday Inns.”

Reminded of that shortly before he was picked as Carter’s running mate, Mondale said, “I’ve checked and found that they’re all redecorated, and they’re marvelous places to stay.”

Related Topics:Walter Mondale
Up Next

Out of Sight but Center Stage, Jurors Weigh Chauvin’s Fate

Amid US Strains, China’s Xi Warns Against ‘Unilateralism’