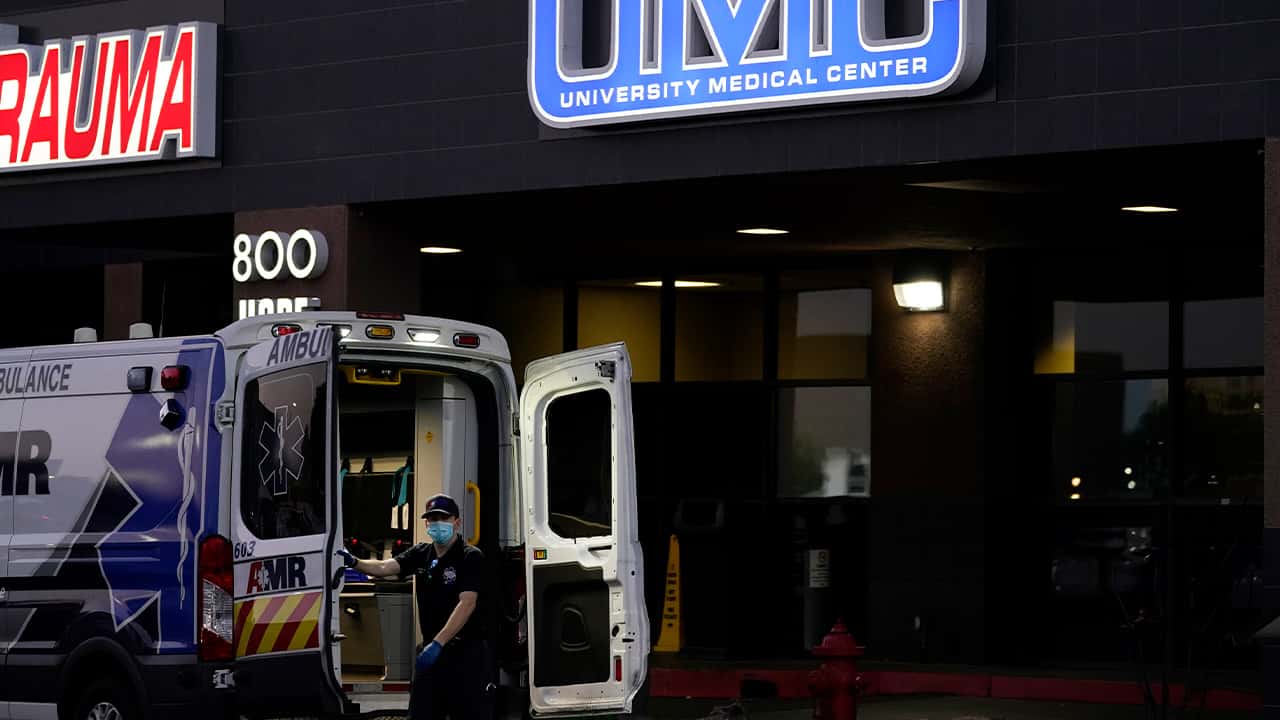 BOISE, Idaho — Hospitals across the United States are starting to buckle from a resurgence of COVID-19 cases, with several states setting records for the number of people hospitalized and leaders scrambling to find extra beds and staff. New highs in cases have been reported in states big and small — from Idaho to Ohio — in recent days.

The rise in cases and hospitalizations was alarming to medical experts.

“It’s really worrisome,” said Saskia Popescu, an epidemiologist at George Mason University. Around the world, disease trackers have seen a pattern: First, the number of cases rises, then hospitalizations and finally there are increases in deaths. Seeing hospitals struggling is alarming, she said, because it may already be too late to stop a crippling surge.

In Kentucky, the governor called the number of daily confirmed cases “grim,” forcing another round of preparations to expand hospital capacity.

“We are now going back to our plans about capacity in hospitals, looking — if we have to — at hotel options and the use of state parks,” Gov. Andy Beshear said during a recent briefing. “Ensuring that we have the operational plans to stand up the field hospital, if necessary.”

The governor reported 776 people hospitalized, including 202 in intensive care and 96 on ventilators. There were 1,312 new COVID-19 cases statewide Tuesday — the fourth-highest one-day total since the pandemic began.

At the other end of the country, Idaho reported its largest coronavirus spike, with new cases increasing by some 47% over the past two weeks. Idaho is currently sixth in the nation for new cases per capita, with a positivity rate of just over 15% — one of the country’s highest.

“The direction we’re heading is one that looks real problematic,” he said.

In some cases, spikes are happening as schools reopen and as Americans grow weary of wearing masks and practicing social distancing.

“At this point in the pandemic, everybody’s tired. Everybody’s craving human interaction,” Popescu, the epidemiologist, said. “I worry this is a ripe situation for us to really bubble over what we’ve seen.”

Winter is a busy season for hospitals as influenza and other respiratory illnesses ramp up with more people congregating indoors. “I worry a COVID wave that causes a heavy surge on hospitals that are already very busy will further add stress to a system that is exhausted,” Popescu said.

Selin Bert, 48, who lives in Portland, Oregon, told The Associated Press that her mother-in-law, who is in her early 70s and lives in Mesquite, Nevada, recently got a severe case of COVID-19 and had to be taken to the ICU in a Las Vegas hospital. She suspects her mother-in-law was infected during a visit from her grandchildren, who traveled from Montana.

Her in-laws, Bert said, were religious about social distancing and wearing masks. But she’s not sure the grandkids were such sticklers.

“They wear masks when they’re outside, the in-laws. I don’t know about the kids, but I do know that that part of the family isn’t big on the whole mask thing, especially because of where they live,” she said, adding she’s not sure the grandkids have since been tested.

“I — we don’t want to even ask because now it’s become a very touchy subject. Because if someone says to you, ‘Hey, you potentially killed your mom, or could have killed your mom,’ it doesn’t really bode well for the family reunion.”

Her mother-in-law had symptoms for a few days at home and her health deteriorated so much that she had to be rushed to the hospital after a family member found her on the bathroom floor. She’s now doing better, but remains severely fatigued, Bert said.

Coronavirus cases are rising so fast in North Dakota that it’s taking officials up to three days to notify people after they test positive, and as a result the state has fallen way behind on tracing their close contacts who might have been exposed.

Republican Gov. Doug Burgum and the North Dakota Department of Health announced late Tuesday that they’re shifting 50 National Guard members who had been working in contact tracing to simply notifying people who test positive. And public health officials will no longer notify close contacts of people who tested positive; instead those individuals will be instructed to self-notify their close contacts and direct them to the department’s website.

North Dakota, with its loose regulations, has the country’s worst per-capita spread rate, with 1,224 new cases per day per 100,000 residents, according to data from Johns Hopkins University.

Nebraska began imposing new coronavirus restrictions Wednesday, after the number of people hospitalized remained at a record level of 380 for two straight days and the state reported 11 new deaths from the virus.

Cliff Robertson, CEO of CHI Health, said his hospital group is working to bring in nurses from other parts of the country to handle the additional cases.

Hospitalizations in Ohio Have Also Hit a New High

Over the past seven days, Nebraska has reported an average of 854 new cases per day, up significantly from two weeks ago when the state was reporting an average 525 cases per day, according to data from Johns Hopkins.

The trend led Republican Gov. Pete Ricketts to announce new restrictions that took effect Wednesday. Hospitals now must keep 10% of their beds free for COVID-19 patients, and customers at restaurants and bars must remain seated at tables with no more than eight people.

In Oklahoma, Gov. Kevin Stitt and state health officials launched a new plan to handle a surge in virus hospitalizations that reached a record one-day high of 821. It includes transferring virus patients from facilities in regions where hospitalizations are high to those with more bed capacity.

Meanwhile, Wyoming health officials reported the number of people hospitalized with the virus has increased to 73, the highest since March. Health officials say the increase mirrors an increase of newly confirmed COVID-19 cases reported across the state since late September. October has been a record-setting month for cases.

Hospitalizations in Ohio have also hit a new high, with 1,154 people hospitalized and 158 on ventilators — the highest number since July.

Republican Ohio Gov. Mike DeWine said Monday he was caught off-guard by the spike in cases and pleaded again for Ohioans to wear masks and keep themselves socially distanced.

And in Boston, Mayor Marty Walsh said public schools will switch to all-remote learning because of a rising number of cases. The city’s seven-day average positive test rate is currently 5.7%, an increase from 4.5% last week. Walsh said students will remain in remote learning until there are two full weeks of falling infection rates.

Should FUSD Board Return to In-Person Meetings? This Trustee Says Yes.