MISSION, Kan. — It began with devastation in the New York City area, followed by a summertime crisis in the Sun Belt. Now the coronavirus outbreak is heating up fast in smaller cities in the heartland, often in conservative corners of America where anti-mask sentiment runs high.

Elsewhere around the country, Florida’s Republican governor lifted all restrictions on restaurants and other businesses Friday and all but set aside local mask ordinances in the political battleground state, in a move attacked by Democrats as hasty.

Meanwhile, confirmed cases of the virus in the U.S. hit another milestone — 7 million — according to the count kept by Johns Hopkins University, though the real number of infections is believed to be much higher.

The spike across the Midwest as well as parts of the West has set off alarms at hospitals, schools and colleges.

Wisconsin is averaging more than 2,000 new cases a day over the last week, compared with 675 three weeks earlier. Hospitalizations in the state are at their highest level since the outbreak took hold in the U.S. in March.

Utah has seen its average daily case count more than double from three weeks earlier. Oklahoma and Missouri are regularly recording 1,000 new cases a day, and Missouri Gov. Mike Parson, a staunch opponent of mask rules, tested positive this week. Kansas and Iowa are also witnessing a spike in cases. And South Dakota and Idaho are seeing sky-high rates of tests coming back positive.

“What we’re seeing is the newer hot spots rise over the course of the last several weeks, predominantly in the Upper Midwest,” said Thomas Tsai, a professor at Harvard’s Chan School of Public Health.

The U.S. Is Averaging More Than 40,000 New Confirmed Cases a Day

Harvard’s tracking dashboard globalepidemics.org has shown an increasing number of states turning red, indicating over 25 new cases per 100,000 population. With experts expecting a surge in coronavirus cases and the flu as cold weather sets in and people move indoors, Tsai warned: “It’s important to not take our foot off the brakes.”

The U.S. is averaging more than 40,000 new confirmed cases a day. While that number is dramatically lower than the peak of nearly 70,000 over the summer, the numbers are worrisome nonetheless. The nation’s death toll eclipsed 200,000 this week, the highest in the world.

The governor, who has resisted making mask-wearing mandatory statewide, also said he will stop cities and counties from collecting fines from people who don’t cover their faces, virtually nullifying local mask ordinances.

Florida was a major hot spot over the summer, and the death toll there stands at nearly 14,000. Deaths are running at over 100 a day, and newly confirmed infections at about 2,700 a day.

Like Trump, DeSantis has questioned the effectiveness of closing down businesses, arguing that states that more aggressively shut down, including California, have fared no better.

“The state of Florida is probably the most open big state in the country,” he boasted Friday.

Florida Democrats have bemoaned the governor’s push to reopen. 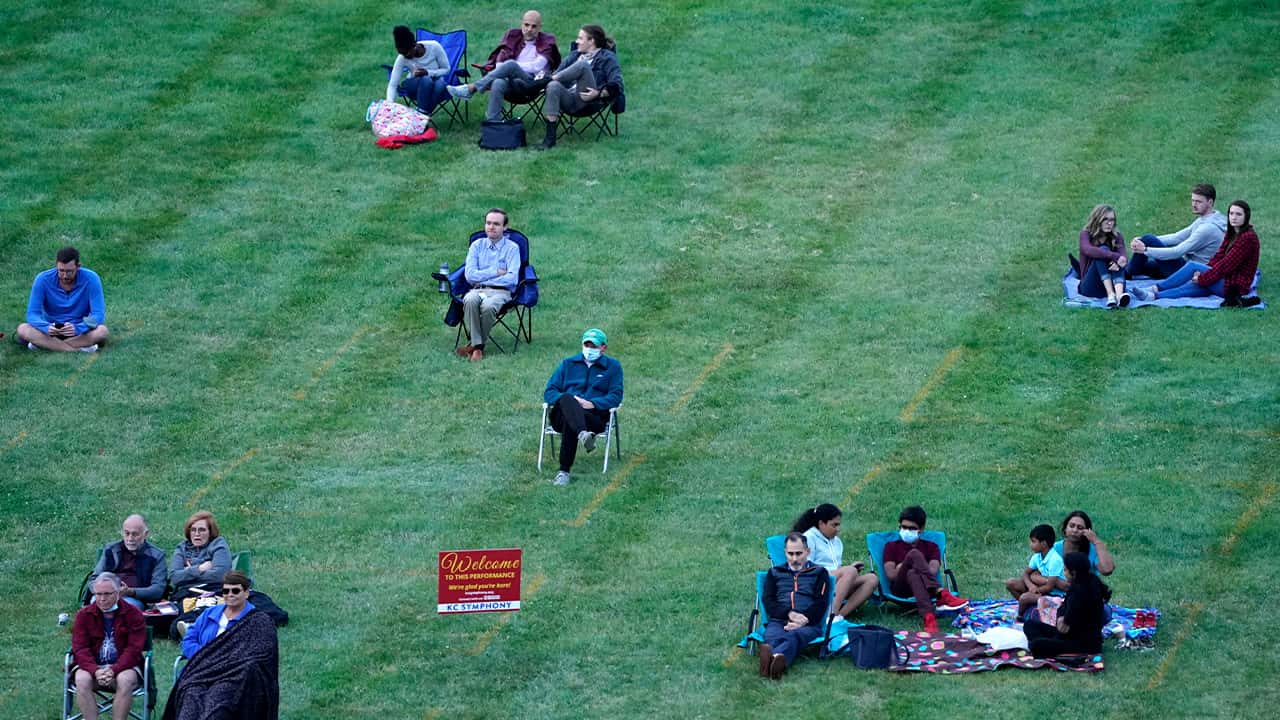 People are socially distanced as they listen to music of the Kansas City Symphony on the lawn at the Liberty Memorial Saturday, Sept. 19, 2020, in Kansas City, Mo. (AP Photo/Charlie Riedel)

“No one is advocating for a full-scale lockdown in Florida. But we have been and continue to ask for common-sense prevention measures such as face masks, which are essential to preventing further spread,” state Sen. Audrey Gibson said Thursday.

— Virginia Gov. Ralph Northam announced he and his wife have tested positive, though he said he has no symptoms. Northam, a Democrat who is also a doctor and usually wears a mask in public, has been criticized by Republicans who say his restrictions aimed at slowing the spread of the virus are too stringent.

— Two former administrators of a Massachusetts veterans home where nearly 80 people died were charged with neglect over their handling of the outbreak. They could go to prison if convicted. It is believed to be the nation’s first criminal case brought against nursing home officials for actions during the crisis.

— In New York City, which beat back the virus after a disastrous spring, four Orthodox Jewish schools were closed for violating social-distancing rules. Health officials said if virus cases in these neighborhoods continue to build, the city might roll back the reopening in some places and require businesses to close back down.

In the Midwest, the virus is now landing squarely in places where there is strong resistance to masks and governors have been reluctant to require face coverings.

In Joplin, Missouri, a mask ordinance was allowed to expire in mid-August as virus fatigue grew. Since then, the number of positive cases there and in surrounding Jasper County — a deeply conservative county that Trump won by more than 50 percentage points over Hillary Clinton in 2016 — has risen about 80%.

“I am getting sick and tired of telling people to wear their masks, and I know they are sick and tired of me saying it,” said Tony Moehr, chief of the Jasper County Health Department. “And it just seems like people have heard it so many times, I’m not sure if they really even hear it anymore when we say it.”

At the home of the University of Oklahoma, the Norman City Council voted 5-3 this week to require that masks be worn indoors at house parties if more than 25 people are present. The ordinance passed over objections from members of the public.

“You can make any law that you want to. You come into my house telling me that I got to wear this stupid thing and you’re going to have a firefight on your hands,” said Josh Danforth, holding a mask, who identified himself as an Iraq war veteran.