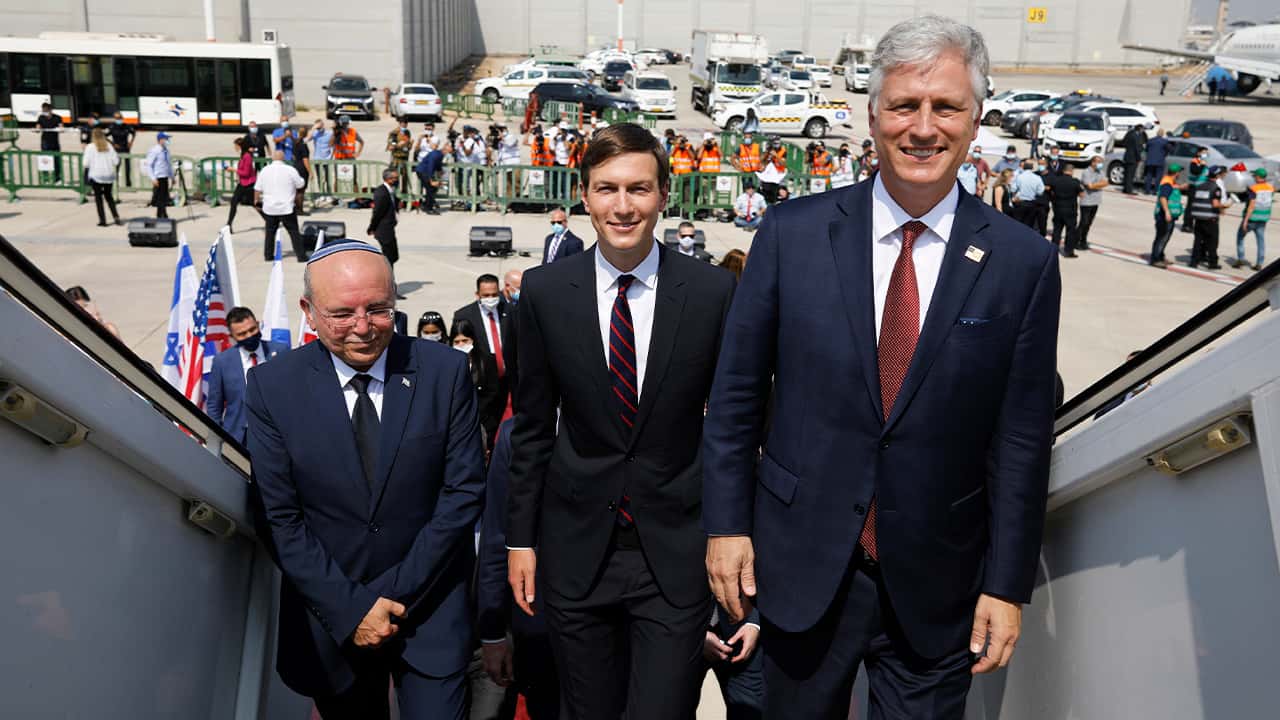 ABU DHABI, United Arab Emirates — A Star of David-adorned El Al plane flew from Israel to the United Arab Emirates on Monday, carrying a high-ranking American and Israeli delegation to Abu Dhabi in the first-ever direct commercial passenger flight between the two countries.

The Israeli flag carrier’s flight marked the implementation of the historic U.S.-brokered deal to normalize relations between the two nations and solidifies the long-clandestine ties between them that have evolved over years of shared enmity toward Iran.

With the U.S. as matchmaker, Israel and the Emirates agreed earlier this month to work toward normalization, which would make it the third Arab nation to have full relations with Israel, after Egypt and Jordan. Unlike those two nations, Israel has never fought a war against the UAE and hopes to have much-warmer relations.

At an airport ceremony in Abu Dhabi, Kushner called the visit a “historic breakthrough” and expressed hope this “will be the first of many” such flights.

“There is great urgency between the people of both countries to break down old barriers, to get to know each other, to form new and hopefully very deep friendships,” he said.

State television in Abu Dhabi broke into its broadcast to show the airplane on the tarmac and aired the comments of all officials, including Ben-Shabbat, who spoke in Arabic and Hebrew. No Emirati officials spoke at the ceremony.

“We came here in broad daylight and before the eyes of all in a plane bearing the flag of Israel along with our American friends,” Ben-Shabbat said. “Israel and the UAE have much in common. Our region is full of challenges and threats. But we have the strength and the ability to stand against them.” The Plane Was Decorated With the the Words for Peace in Arabic, Hebrew and English

The El Al flight, numbered LY971 after the UAE’s international calling code number, flew into Saudi Arabian airspace shortly after takeoff and later passed over the capital, Riyadh. That marked another historic first for Israel and signaled acquiescence by the kingdom for the UAE’s move.

“They were very gracious to allow us to fly over their airspace, which they’ve never done before, for an Israeli commercial plane,” Kushner said.

He said he would be traveling to Saudi Arabia after the visit. Kushner and other officials have said they hope more Arab nations will follow the UAE in establishing ties with Israel, even without a peace agreement with the Palestinians.

Saudi King Salman, along with other Gulf Arab leaders to varying degrees, maintain their boycotts of Israel in support of Palestinians obtaining an independent state. Any regular flights between Israel and the UAE would require Saudi clearance to be profitable. Otherwise the three hour, 20 minute flight would have taken more than seven hours.

The plane was decorated with the the words for peace in Arabic, Hebrew and English above the pilot’s window.

The Israeli delegation will stay in the capital, Abu Dhabi, for one night before returning home on El Al flight LY972, a reference to Israel’s international calling code.

Private jets have earlier flown between the two nations as part of covert talks, and Abu Dhabi’s Etihad Airways flew cargo freighters to Israel before to deliver coronavirus aid to the Palestinians. But the high-profile flight Monday looked to place a solid stamp on the surprise Aug. 13 White House announcement of Israel and the UAE establishing ties.

Some Israeli Firms Have Already Signed Deals with Emirati Counterparts

Since then, telephone calls were connected, and the UAE’s ruler issued a decree formally ending the country’s decades-long boycott of Israel. Some Israeli firms have already signed deals with Emirati counterparts, and Monday’s visit is expected to usher in further business cooperation.

The UAE has touted the deal as a tool to force Israel into halting its contentious plan to annex parts of the West Bank sought by the Palestinians for their future state. It also may help the Emirates acquire advanced U.S. weapons systems that have been previously unattainable, such as the F-35 fighter jet. Currently, Israel is the only country in the region with the stealth warplanes.

The Palestinians, however, have fiercely opposed the normalization as peeling away one of their few advantages in moribund peace talks with Israel. Palestinians have held public protests and burned the UAE flag in anger.

In the West Bank, Palestinian Prime Minister Mohammad Shtayyeh said it was “very painful” to see the flight take place. He also criticized El Al for picking a plane named for Kiryat Gat, a southern Israeli city built near the ruins of what were once Arab villages before the 1948 establishment of Israel.

During the Arab-Israeli war at that time, thousands of Egyptian troops were encircled by Israeli forces, including future Egyptian President Gamal Abdel Nasser.

“It hurts us very much today when an Israeli plane lands in the Emirates, under the flight name Kiryat Gat, the settlement which was built on the occupied Palestinian lands of the town of Fallujah in which Gamal Abdel Nasser was trapped, in a clear and a blatant violation of the Arab position toward the Arab-Israeli conflict,” he said.

In a reference to the Palestinians, Kushner said “the very few who have been critical of this peace agreement are the ones with a long track record of failure and trapping their people in misery and poverty.”

But he also said he sent a message of “hope” to the Palestinians.

“When they are ready, the whole region is very excited to help lift them up and move them forward. But they can’t be stuck in the past,” he said.

Israelis eagerly anticipate the prospect of mutual embassies, expanding tourism to the Gulf and solidifying business opportunities with another country that shares its penchant for technology and innovation.

Israeli Prime Minister Benjamin Netanyahu has touted the deal as validation of his vision that regional peace doesn’t require Palestinian acquiescence or come at the cost of ceding land.

But he has come under fire from supporters at home for seemingly giving up on dreams of annexation and tacitly agreeing to the F-35 sale that could undermine Israel’s regional superiority. Kushner reiterated the U.S. commitment to maintaining Israel’s qualitative military advantage over its Arab neighbors.

For Trump, the accord delivers a key foreign policy victory as he faces a tough reelection campaign. It also helps solidify an emerging anti-Iran alliance that includes Israel and pro-Western Arab governments.

“Right now the biggest threat we see in the region is Iran,” Kushner said.

When Trump Talks Law and Order, Some Wisconsin Voters Listen