LOS ANGELES — The Sierra Club is calling out its founder, naturalist John Muir, for racist remarks he made more then a century ago as the influential environmental group grapples with a harmful history that perpetuated white supremacy.

Executive Director Michael Brune said Wednesday that it was “time to take down some of our own monuments” as statues of Confederate officers and colonists are toppled in a reckoning with the nation’s racist history following the police killing of George Floyd in Minneapolis.

Muir, who founded the club in 1892, helped spawn the environmental movement and is called “father of our national parks,” is the focus of what Brune called a “truth-telling” about the group’s history.

“He made derogatory comments about Black people and Indigenous peoples that drew on deeply harmful racist stereotypes, though his views evolved later in his life,” Brune wrote on the group’s website. “As the most iconic figure in Sierra Club history, Muir’s words and actions carry an especially heavy weight. They continue to hurt and alienate Indigenous people and people of color.”

Muir, who was born in Scotland, came to the U.S. as a young man and traveled extensively, writing eloquently about nature and the need to preserve it but also dismissively describing “dirty” people he encountered, a word he used for Black people and American Indians, whom he also referred to as “savages.”

Muir also kept company with other early club members and leaders, such as Joseph LeConte and David Starr Jordan, who advocated for white supremacy and promoting the race through eugenics, which called for forced sterilization of Blacks and other minority groups.

He also kept company with other early club members and leaders, such as Joseph LeConte and David Starr Jordan, who advocated for white supremacy and promoting the race through eugenics, which called for forced sterilization of Blacks and other minority groups, Brune said.

“The whiteness and privilege of our early membership fed into a very dangerous idea — one that’s still circulating today. It’s the idea that exploring, enjoying, and protecting the outdoors can be separated from human affairs,” Brune wrote. “Such willful ignorance is what allows some people to shut their eyes to the reality that the wild places we love are also the ancestral homelands of Native peoples, forced off their lands in the decades or centuries before they became national parks.” 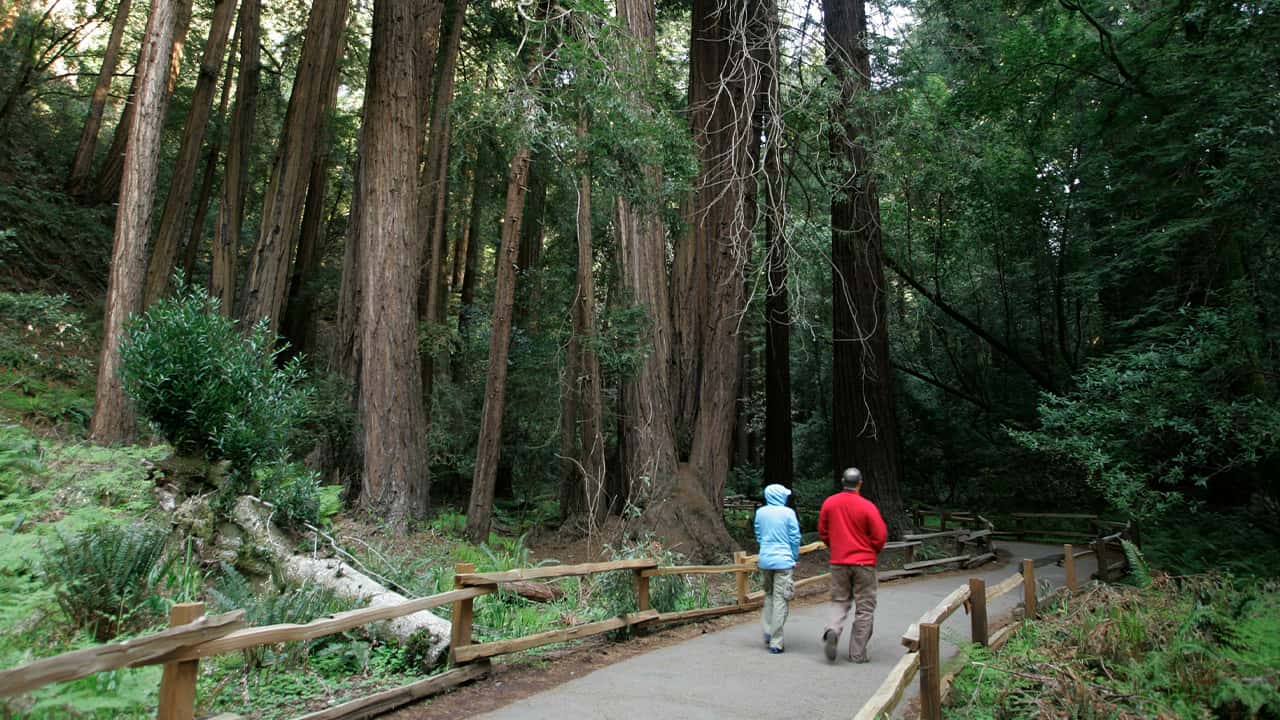 In this March 31, 2008, photo, a couple walks along a pathway beneath giant redwoods at the Muir Woods National Monument, named after John Muir, in Marin County, Calif. The Sierra Club is reckoning with the racist views of founder John Muir, the naturalist who helped spawn environmentalism. (AP File)

Brune said that upon board approval the Sierra Club would shift $5 million from its budget “to make long-overdue investments in our staff of color and our environmental and racial justice work.”

And, over the next year, Brune said, the club will determine which of its monuments “need to be renamed or pulled down entirely.”

Muir’s Name Is on Schools and California Attractions

Until recent years, Muir’s legacy has been largely untarnished and focused on his conservation efforts, such as saving Yosemite Valley before it became a national park and preserving the world’s largest trees in what became Sequoia National Park.

He is so widely revered that his name appears across California on everything from schools to national monuments, one of the state’s highest peaks, a giant swath of scenic Sierra Nevada wilderness that is bisected by a trail in his name and a national historic site. He appears on the 2005 California quarter when the U.S. Mint was producing a commemorative coin for every state.

In Alaska, where he traveled extensively, a glacier and an inlet in Glacier Bay National Park and Preserve are named for Muir, as likely is a mountain about 50 miles east of Anchorage, in the Chugach Mountains.

You can’t walk into a national park gift shop without noticing the T-shirts, mugs, and tchotchkes bearing one of his pithy — often overused — quotes, such as “The mountains are calling and I must go.”

A 5-ton marble statue of Christopher Columbus was recently removed from the state Capitol rotunda because his arrival in the New World in 1492 set off European colonization and led to the deaths of native people. A statue honoring John Sutter, who owned the mill where the discovery of gold set off the California Gold Rush, was removed in Sacramento because he enslaved Native Americans.

Groups have called for changing the name of the Alabama Hills in the eastern Sierra, which were named by Southern sympathizers and the Northern California coastal town of Fort Bragg, named for a Confederate general.