Restaurants in Fresno and surrounding counties have been ordered to close indoor dining spaces immediately in response to surging COVID-19 infections across California.

Gov. Gavin Newsom announced the rollback of rules for restaurants and other businesses early Wednesday afternoon. The prohibition on indoor dining will remain in effect for at least three weeks, Newsom said.

The rollback applies to 19 counties across California that have been on the state’s COVID containment “watch list” for three consecutive days. In addition to Fresno, the restrictions also apply to the Valley counties of Tulare, Kings, Merced, and Kern.

The counties included in the Governor’s revised stay-at-home, including Los Angeles, account for nearly three-quarters of the state’s roughly 40 million population.

A number of local businesses in these categories had only recently reopened following a loosening of the state’s original shutdown order issued in March.

Newsom also expanded his Sunday order requiring bars in Fresno and a number of other countries to completely close, to all 19 counties on the state’s monitoring list. 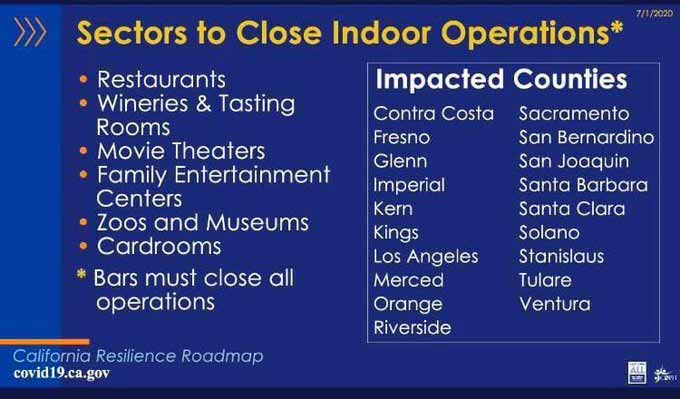 The order came just days ahead of what is expected to be a busy Fourth of July weekend. That worried public health officials because people were expected to gather in larger numbers than they have for months after the state relaxed its stay-at-home order allowing more businesses to open.

“The bottom line is the spread of this virus continues at a rate that is particularly concerning,” Newsom said.

The governor did not order beaches to close, but said parking lots at state beaches in some Northern and Southern California counties would close to limit crowds. State parks — such as Millerton Lake — will remain open, but with measures in place to reduce overcrowding, he said.

Enforcing the new rules will be difficult, Newsom acknowledged. Local law enforcement leaders — including Sheriff Margaret Mims — have previously said they will not use their resources to enforce the state’s stay at home orders.

But Newsom said seven state agencies with regulatory authority would target non-compliant businesses, including the Department of Alcoholic Beverage Control, the Department of Consumer Affairs and the California Highway Patrol.

He suggested that state officials would first try to convince non-compliant businesses to cooperate instead of penalizing them.

“It’s more education. I’m not coming out with a fist. We want not come out with an open heart, recognizing the magnitude of some of these modifications,” Newsom said.

California has confirmed close to 223,000 infections, a nearly 50% increase over two weeks ago that has been driven in part by the state’s ability to now test more than 100,000 people per day. But more concerning to officials is the steady growth in COVID-19 hospitalizations — a 43% increase in the past two weeks.

The state requires people to wear masks when they can’t maintain physical distance but public health officials have said lack of social distancing during Memorial Day get-togethers in May may have contributed to the surge.

“You’ve got to keep people from congregating,” agreed Dr. George Rutherford, an epidemiologist at the University of California, San Francisco. But he said it’s up to the public to heed social distancing.

“Just because it’s summer and they feel like having a barbecue with all their friends, it can’t be that way,” Rutherford said. “I don’t know how one legislates that.”

Local health officials have expressed concerns about rising case numbers and said some hospitals have invoked emergency protocols because they were nearing capacity.

“Our cases are not currently under control,” said Dr. Rais Vohra, interim health officer for Fresno County. “We’re quite worried that we don’t have room to expand.”

For most people, the new coronavirus causes mild or moderate symptoms, such as fever and cough that clear up in two to three weeks. For some, especially older adults and people with existing health problems, it can cause more severe illness, including pneumonia and death.