US Police Registry Would Fail Without Changes in States 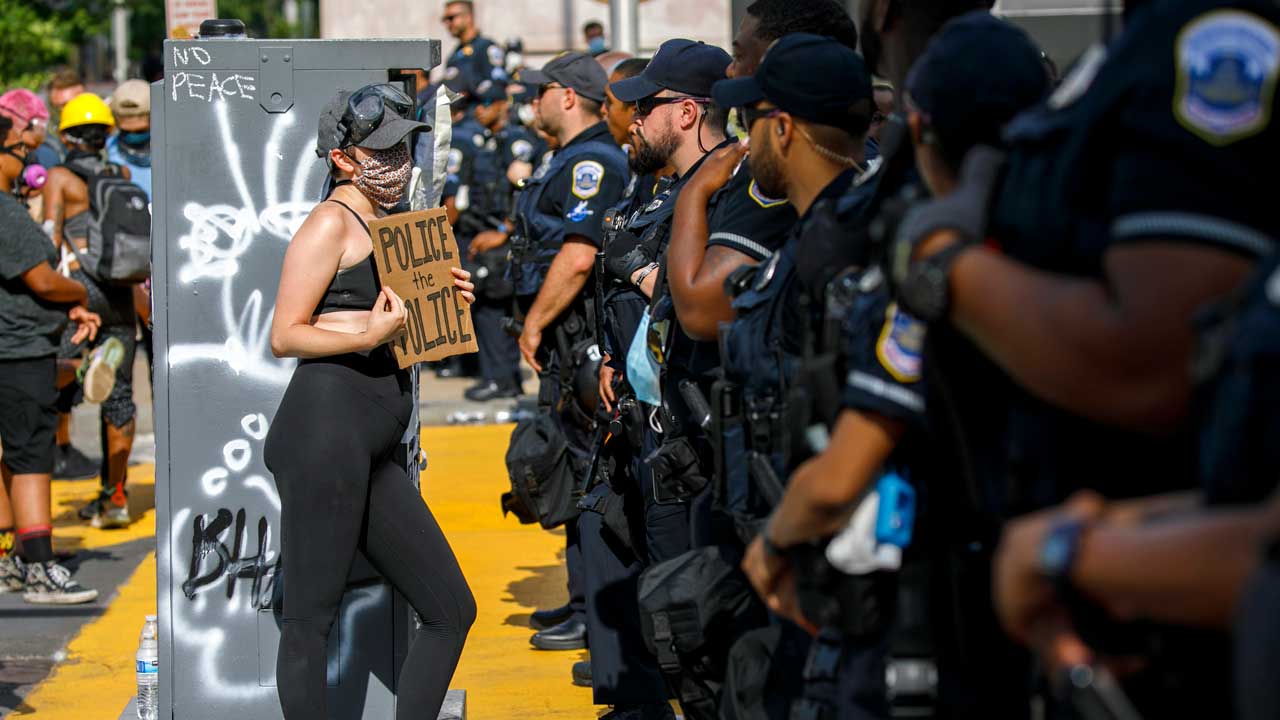 HOUSTON (AP) — Without major changes in almost every state, a national police misconduct database like what the White House and Congress have proposed after George Floyd’s death would fail to account for thousands of problem officers.
Lawmakers nationwide are struggling with how to reform policing following massive demonstrations, increased calls for change and a stark shift in public opinion on the topic. Democrats want to create a policing registry that would catalog disciplinary records, firings and misconduct complaints; President Donald Trump’s executive order calls on the attorney general to create a “database to coordinate the sharing of information” between law enforcement agencies.
Any eventual registry that emerges would depend on states reporting into it. But states and police departments track misconduct very differently, and some states currently don’t track it at all. The result is a lack of reliable official data and a patchwork system in which officers can stay employed even after being arrested or convicted of a crime.

In the wake of Floyd’s death, lawmakers in several states have proposed bolstering their states’ powers to identify and remove problem officers.
“I think the politicians have been reluctant to take a step that might be perceived as anti-police,” Ohio Attorney General Dave Yost said.
Yost and Ohio Gov. Mike DeWine, both Republicans, have proposed giving their state’s police licensing agency the power to remove officers from law enforcement for racial profiling or other misconduct that doesn’t lead to a criminal charge, a power many states already have.
“The potential for reform is better than it’s been in my professional lifetime,” Yost said. “That doesn’t mean it’s a certainty on how much we’re going to get, but there’s a genuine interest and willingness to look at these things seriously and honestly.”
One measure of police misconduct at a state level is decertification. Almost all states issue licenses to police officers by mandating standards and training. Most states can decertify an officer’s license to prevent a bad one from working in law enforcement.

The Associated Press this month asked all 50 states to provide the number of officers they decertified for the last five full years. Georgia said it decertified 3,239 officers between 2015 and 2019. Minnesota, where Floyd died after a white police officer pressed a knee on his neck for several minutes, decertified 21. Maryland decertified just one officer.
Minnesota revokes an officer’s license automatically only after the officer is convicted of a felony. Georgia can take an officer’s license on several grounds, including misuse of force, committing a theft that isn’t prosecuted or lying in an internal investigation.
The suburban Minneapolis police officer who killed Philando Castile, a Black man, during a 2016 traffic stop was never decertified. The officer, Jeronimo Yanez, was acquitted of second-degree manslaughter and later left his department under a settlement. He is not working in law enforcement elsewhere in Minnesota, according to the state licensing board.

A federal requirement to collect police misconduct data already exists. According to criminal justice experts, the Justice Department has never met a requirement in the landmark 1994 crime bill — signed by then-President Bill Clinton, a Democrat — that it would “acquire data about the use of excessive force by law enforcement officers” and publish an annual summary.
Then-President Barack Obama created a task force on policing that in 2015 recommended the creation of a police misconduct registry, but no action was taken. And the outlook for a policing bill is newly uncertain after Senate Democrats on Wednesday blocked a Republican proposal from moving forward. The House approved a far-reaching police overhaul from Democrats on Thursday, but it has almost zero chance of becoming law.
In the meantime, the most complete information on officer shootings, sexual assaults and arrests has been compiled by university researchers and news organizations.
In 2015, The Associated Press found that nearly 1,000 officers had been decertified across the country over six years for sexual assault or other forms of sexual misconduct.
The AP’s investigation uncovered examples of officers who were accused of sexual misconduct at one agency, fired or allowed to resign, then rehired in law enforcement and accused of misconduct again.

California Among States with No Officer Decertification Process

Five states — California, Hawaii, Massachusetts, New Jersey and Rhode Island — have no decertification process at all. Neither does the federal government for most of its estimated 130,000 law enforcement officers, including agents in the FBI, U.S. Immigration and Customs Enforcement and the U.S. Border Patrol.
The Department of Justice declined to comment on how it would implement Trump’s executive order.
For now, states voluntarily submit the names of officers to a private database called the National Decertification Index that police agencies can use in hiring. But Georgia doesn’t submit names to the index because it is “not a governmental institution,” according to Ryan Powell, deputy director of the state’s standards board. Meanwhile, Minnesota and almost all other states do.
The index was created and updated with Department of Justice grant funding but last received federal money in 2005, said Mike Becar, director of the organization that runs the index. He runs the database on roughly $1,000 a month.
“The federal government could apply a lot more pressure,” Becar said. “The biggest hurdle is the 50 states with their own individual laws and regulations and legislatures.”
In the meantime, the attorneys general of California and New Jersey, both Democrats, announced they support creating a system to decertify police officers in their states. And New York, which implemented police decertification in 2016, this month repealed a law that shielded police misconduct records from public disclosure.
Even if an eventual national registry of officers were incomplete, it would still be helpful, said Yost, the Ohio attorney general. Ohio decertified 93 officers between 2015 and 2019.
“Some information is better than no information,” Yost said. “Because the thing is hard doesn’t mean we shouldn’t start and do what we can.”