NEW YORK — The coronavirus has prompted almost two-thirds of American believers of all faiths to feel that God is telling humanity to change how it lives, a new poll finds.

While the virus rattles the globe, causing economic hardship for millions and killing more than 80,000 Americans, the findings of the poll by the University of Chicago Divinity School and The Associated Press-NORC Center for Public Affairs Research indicate that people may also be searching for deeper meaning in the devastating outbreak.

Even some who don’t affiliate with organized religion, such as Lance Dejesus of Dallastown, Pa., saw a possible bigger message in the virus.

“It could be a sign, like ‘hey, get your act together’ – I don’t know,” said Dejesus, 52, who said he believes in God but doesn’t consider himself religious. “It just seems like everything was going in an OK direction and all of a sudden you get this coronavirus thing that happens, pops out of nowhere.”

The poll found that 31% of Americans who believe in God feel strongly that the virus is a sign of God telling humanity to change, with the same number feeling that somewhat. Evangelical Protestants are more likely than others to believe that strongly, at 43%, compared with 28% of Catholics and mainline Protestants.

The question was asked of all Americans who said they believe in God, without specifying a specific faith. The survey did not have a sample size large enough to report on the opinions of religious faiths with smaller numbers of U.S. adherents, including Muslims and Jews.

In addition, black Americans were more likely than those of other racial backgrounds to say they feel the virus is a sign God wants humanity to change, regardless of education, income or gender. Forty-seven percent say they feel that strongly, compared with 37% of Latino and 27% of white Americans. 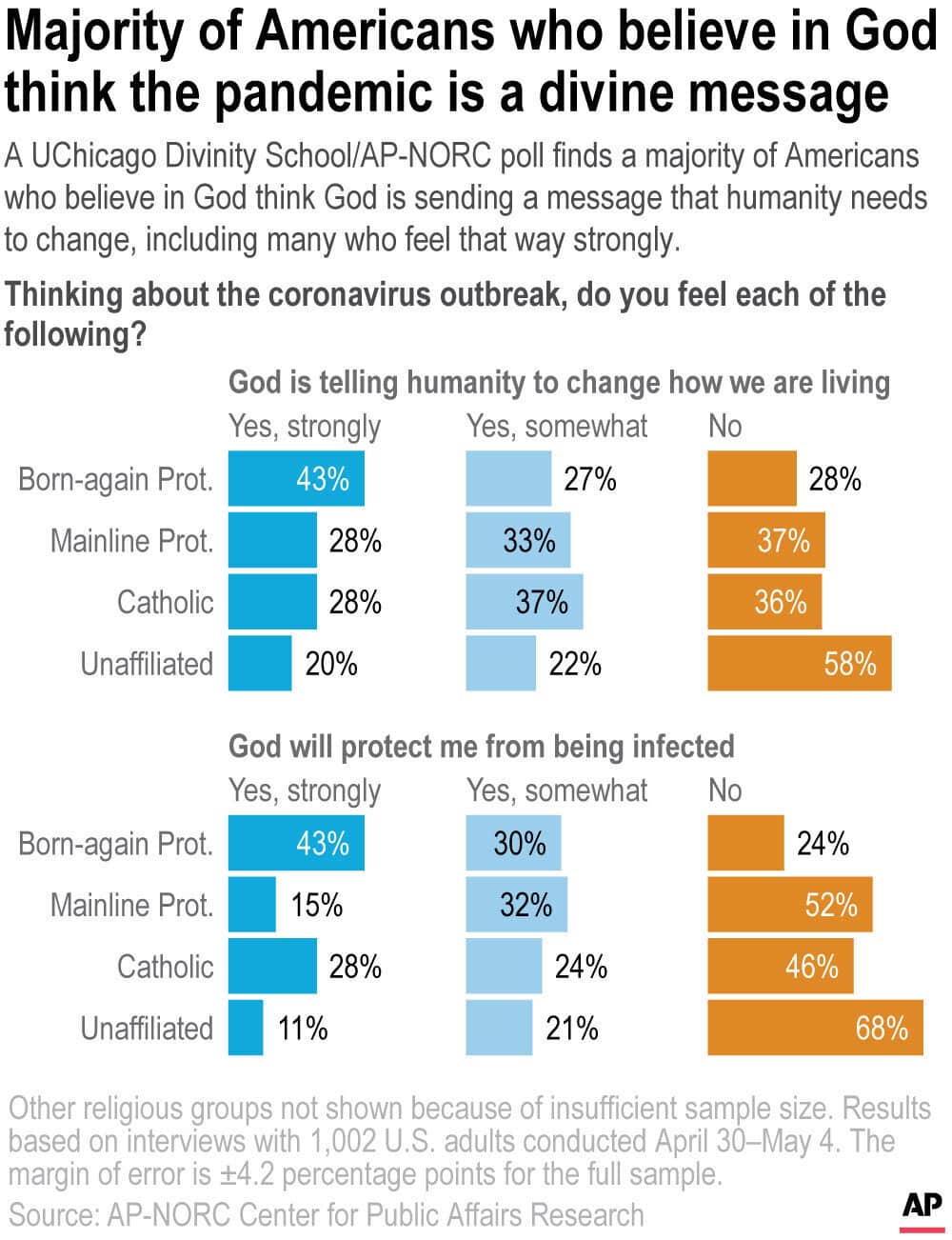 The COVID-19 virus has disproportionately walloped black Americans, exposing societal inequality that has left minorities more vulnerable and heightening concern that the risks they face are getting ignored by a push to reopen the U.S. economy. Amid that stark reality, the poll found black Americans who believe in God are more likely than others to say they have felt doubt about God’s existence as a result of the virus — 27% said that, compared with 13% of Latinos and 11% of white Americans.

Most houses of worship stopped in-person services to help protect public health as the virus began spreading, but that didn’t stop religious Americans from turning to online and drive-in gatherings to express their faiths. Americans with a religious affiliation are regularly engaging in private prayer during the pandemic, with 57% saying they do so at least weekly since March — about the same share that say they prayed as regularly last year.

Kathryn Lofton, a professor of religious studies at Yale University, interpreted the high number of Americans perceiving the virus as a message from God about change as an expression of “fear that if we don’t change, this misery will continue.”

“When people get asked about God, they often interpret it immediately as power,” said Lofton, who collaborated with researchers from the University of Chicago and other universities, along with The Associated Press, on the design of the new poll. “And they answer the question saying, ‘Here’s where the power is to change the thing I experience.’”

Fifty-five percent of American believers say they feel at least somewhat that God will protect them from being infected. Evangelical Protestants are more likely than those of other religious backgrounds to say they believe that, with 43% saying so strongly and another 30% saying so somewhat, while Catholics and mainline Protestants are more closely split on feeling that way or not. 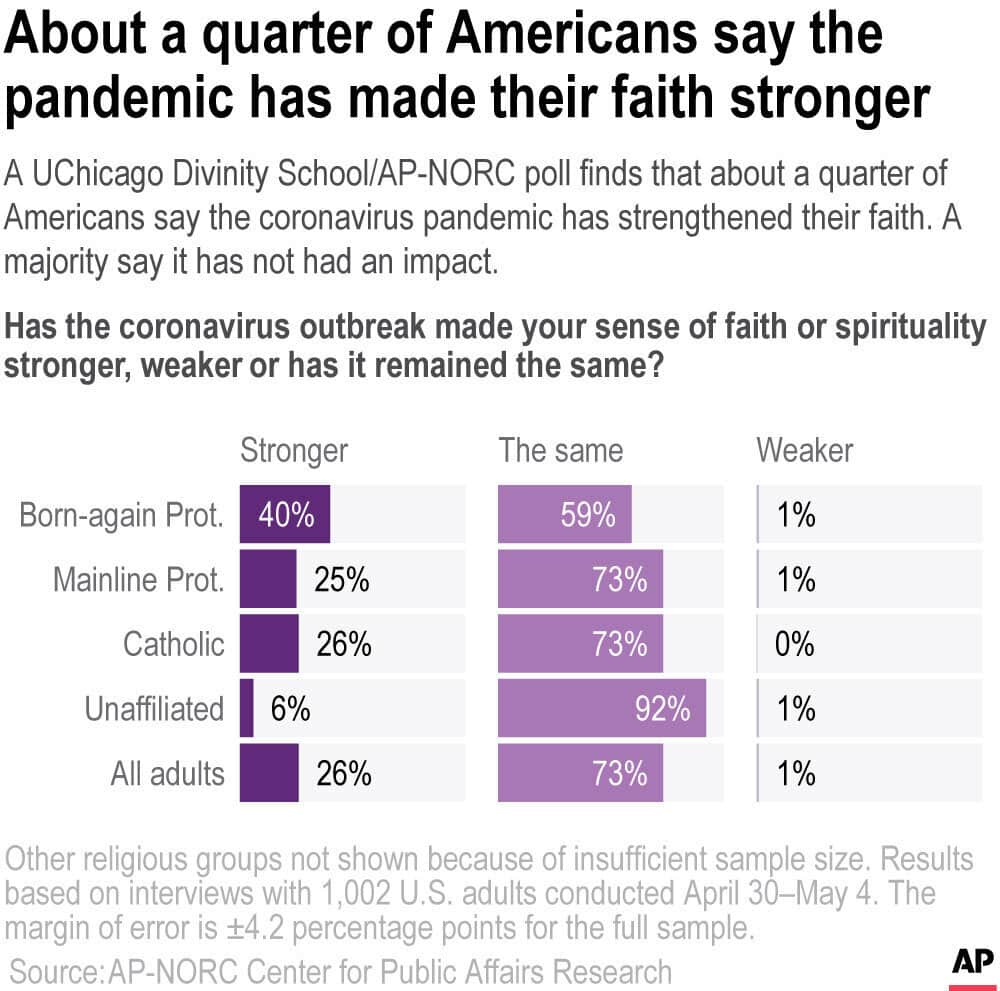 Some Feel Strongly That God Will Protect Them From the Virus

However, the degree and nature of protection that God is believed to offer during the pandemic can differ depending on the believer. Marcia Howl, 73, a Methodist and granddaughter of a minister, said she feels God’s protection but not certainty that it would save her from the virus.

“I believe he has protected me in the past, that he has a plan for us,” said Howl, of Portalas, N.M. “I don’t know what’s in his plan, but I believe his presence is here looking after me. Whether I can survive it or not, that’s a different story.”

Among black Americans who believe in God, 49% say they feel strongly that God will protect them from the virus, compared with 34% of Latino and 20% of white Americans.

David Emmanuel Goatley, a professor at Duke University’s divinity school who was not involved with the survey, said religious black Americans’ view of godly protection could convey “confidence or hope that God is able to provide — that does not relinquish personal responsibility, but it says God is able.”

Goatley, who directs the school’s Office of Black Church Studies, noted a potential distinction between how religious black Americans and religious white Americans might see their protective relationship with God.

Within black Christian theology is a sense of connection to the divine in which “God is personally engaged and God is present,” he said. That belief, he added, is “different from a number of white Christians, evangelical and not, who would have a theology that’s more a private relationship with God.”

The AP-NORC poll of 1,002 adults was conducted April 30-May 4 using a sample drawn from NORC’s probability-based AmeriSpeak Panel, which is designed to be representative of the U.S. population. The margin of sampling error for all respondents is plus or minus 4.2 percentage points.