DUBAI, United Arab Emirates — Iran girded Wednesday for a long battle against the coronavirus that is spreading rapidly across the country and the wider Middle East, even though officials in the Islamic Republic had earlier minimized the outbreak that has now killed 19 people, the highest toll outside of China.

“We must not let the United States attach a new virus to the coronavirus by stopping our social activities through tremendous fear. This is a conspiracy we see today and you see in foreign propaganda.” — President Hassan Rouhani

President Hassan Rouhani said there were no immediate plans to quarantine cities, but he acknowledged it may take “one, two or three weeks” to get control of the virus in Iran, which has been linked to most of the over 210 confirmed cases in the region.

As Iran’s 80 million people find themselves increasingly isolated in the region by the outbreak, the country’s sanctions-battered economy saw its currency slump to its lowest level against the U.S. dollar in a year.

Rouhani sought to portray the virus crisis in terms of Iran’s tense relationship with the U.S., which under President Donald Trump unilaterally withdrew from its nuclear deal with world powers and sent its economy into freefall.

“We must not let the United States attach a new virus to the coronavirus by stopping our social activities through tremendous fear. This is a conspiracy we see today and you see in foreign propaganda,” Rouhani said at a Cabinet meeting, according to a transcript on the presidency’s website.

“They are also suffering from coronavirus. Influenza has killed 16,000 people in the United States, but they are not speaking about themselves. Americans better take care of thousands of flu casualties in their own country,” he said.

The comments by Rouhani came as Iran appeared to be slowly coming to grips with the scope of the crisis. 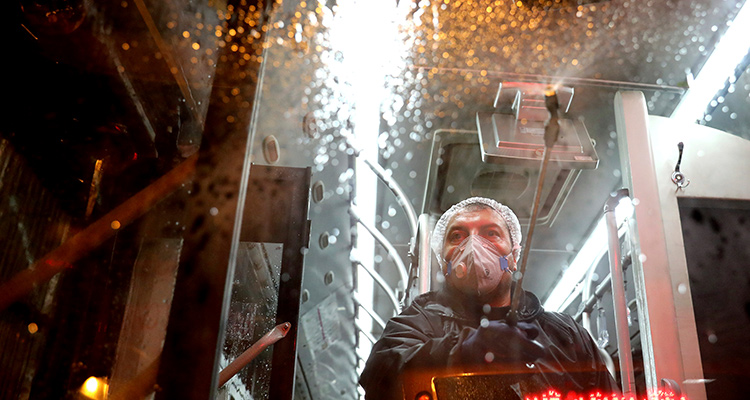 A worker disinfects a public bus against coronavirus in Tehran, Iran, in early morning of Wednesday, Feb. 26, 2020. Iran’s government said Tuesday that more than a dozen people had died nationwide from the new coronavirus, rejecting claims of a much higher death toll of 50 by a lawmaker from the city of Qom that has been at the epicenter of the virus in the country. (AP Photo/Ebrahim Noroozi)

Masks and Hand Sanitizer Are Difficult to Find in Iran

The masks are difficult to find in Iran, as is alcohol-based hand sanitizer and other materials, because Iranian law typically prohibits the import of items that can be made locally. Those rules have been loosened in the crisis.

Health Ministry spokesman Kianoush Jahanpour said 19 people have died from the illness, which is named COVID-19, with 139 confirmed cases in the country. The World Health Organization says the virus has infected more than 80,000 people globally, causing over 2,700 deaths, mainly in China.

Experts are concerned that Iran may be underreporting cases and deaths, given its rapid spread from Iran across the Persian Gulf. Ahmad Amirabadi Farahani, a hard-line lawmaker. has alleged there have been 50 deaths in Qom alone, which the government denied.

Figures released Wednesday still showed no cases confirmed in the Iranian city of Mashhad, even though a number of cases reported in Kuwait are linked to there.

“We must be optimistic, because pessimism causes us to attract this disease,” said Afsaneh Azarloo, a Tehran resident. “We should be optimistic and hope that nothing bad will happen to us.”

That optimism was not shared by another passer-by, who gave his name only as Saeed.

“I’m worried. It’s the first time I have left home after a week,” he said. “My home is now my workplace too.”

That pessimism is widespread, especially after the top official in charge of Iran’s response to the coronavirus tested positive for the illness after trying to play down the disease a day earlier.

Iran’s Cyber Police reported that 24 people were arrested and 118 other were warned about “spreading rumors” on the internet about the virus.

“Coronavirus must not be turned into a weapon for our enemies to halt work and production in our country,” Rouhani said.

Iran’s currency, the rial, fell to its lowest level against the U.S. dollar in a year, likely pushed by the country’s neighbors closing borders and air routes. The rial traded at 160,000 to $1. At the time of Iran’s nuclear deal with world powers in 2015, it traded at 32,000 to $1.

“Containment of the COVID-19 virus within Iran will be a challenge because of Iran’s poor health infrastructure and traditional unwillingness to communicate freely and openly across all branches of government and between health institutions.” — the Austin, Texas private intelligence firm Stratfor

Rouhani’s estimate of up to three weeks to control the virus followed efforts by officials repeatedly to minimize its threat.

That has sparked more concern among Iranians already angry over nationwide economic protests, the U.S. drone strike that killed a top Iranian general and Iran accidentally shooting down a Ukrainian jetliner and then denying it for days. The Feb. 21 parliamentary election also saw the country’s lowest recorded turnout.

Jahanpour suggested Tuesday it could take as long as late April to control the virus. And with the Persian New Year, or Nowruz, coming on March 20, experts worry it could worsen.

“Containment of the COVID-19 virus within Iran will be a challenge because of Iran’s poor health infrastructure and traditional unwillingness to communicate freely and openly across all branches of government and between health institutions,” the Austin, Texas private intelligence firm Stratfor said.

That worry was echoed by analysts at the Eurasia Group.

“Tehran is likely significantly underestimating the risk posed by an outbreak of coronavirus to its citizens, economy and neighbors,” they wrote. “Iran has a relatively robust public health system, although it has been weakened by U.S. sanctions. But a breakdown in national-level decision-making has severely hampered its ability contain the spread of the virus.”