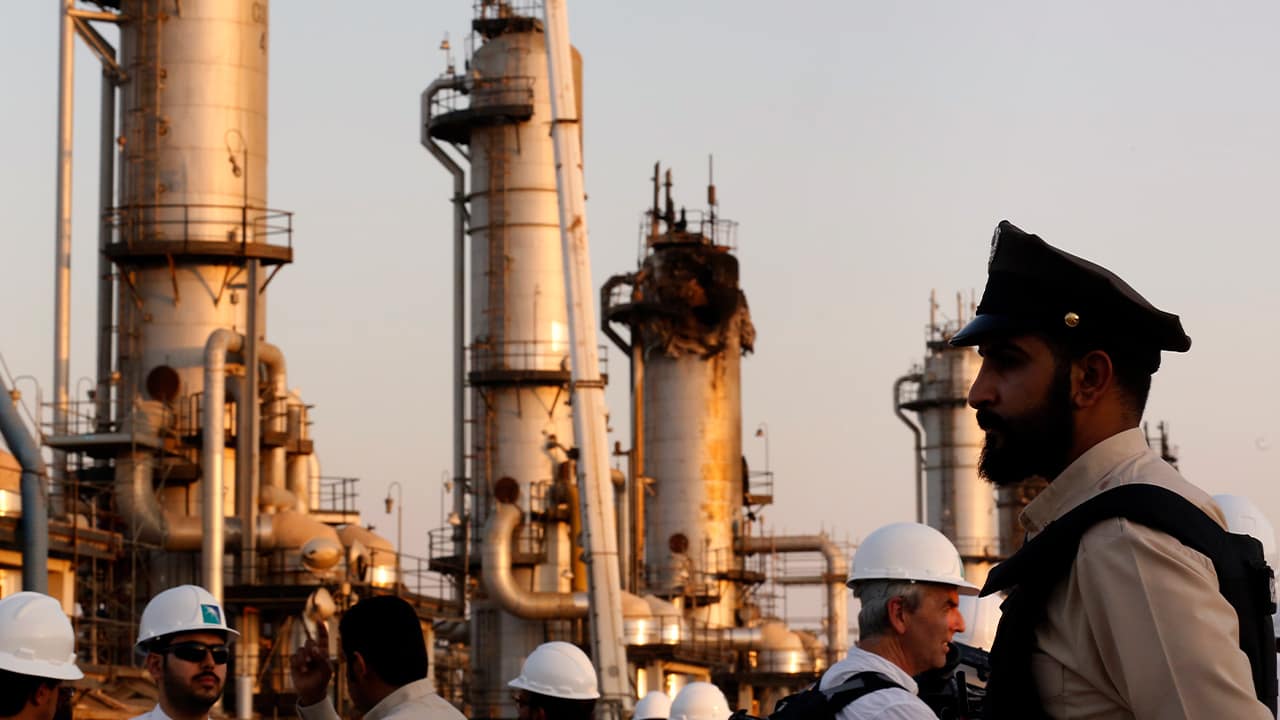 DUBAI, United Arab Emirates — A small instrument inside the drones that targeted the heart of Saudi Arabia’s oil industry and those in the arsenal of Yemen’s Houthi rebels match components recovered in downed Iranian drones in Afghanistan and Iraq, two reports say.
These gyroscopes have only been found inside drones manufactured by Iran, Conflict Armament Research said in a report released on Wednesday. That follows a recently released report from the United Nations saying its experts saw a similar gyroscope from an Iranian drone obtained by the U.S. military in Afghanistan, as well as in weapons shipments seized in the Arabian Sea bound for Yemen. The discovery further ties Iran to an attack that briefly halved Saudi Arabia’s oil output and saw energy prices spike by a level unseen since the 1991 Gulf War. It also ties Iran to the arming of the rebel Houthis in Yemen’s long civil war. Iran denies it had a hand in that assault but has increasingly promoted its influence over the Houthis and launched a ballistic missile attack on American troops in Iraq after a U.S. drone strike killed a top Iranian general in Baghdad last month.
“This gyroscope … we’ve seen it now enough times in Iranian-manufactured material to be able to confidently say that the presence of it in a Houthi-produced item suggests that the material was supplied from Iran,” Jonah Leff of Conflict Armament Research told The Associated Press.
Iran’s mission to the U.N. declined to immediately respond to queries from the AP.

The Gyroscopes in Question Bear No Manufacturer’s Name

Media officials from the rebel Houthis, who hold Yemen’s capital, Sanaa, and have been battling a Saudi-led coalition since March 2015, declined an interview request. A U.N. Security Council resolution prohibits arms transfers to the Houthis.
A gyroscope is a device that helps orient and guide a drone or missile to its target. The gyroscopes in question bear no manufacturer’s name and come in at least two versions labeled as V9 and V10, according to the reports. Their four-digit serial numbers also appear sequential, suggesting the same manufacturer had built all of those found.
The Houthi’s Qasef-1 drone carries the V10 gyroscope, which is “identical” to one found in an Iranian-made Ababil-3 drone, which Islamic State group fighters reportedly recovered in Iraq, Conflict Armament Research said. Weapons experts found the V9 version of the gyroscope in drones, or unmanned aerial vehicles, used in the September attack on Abqaiq, home of a crucial oil processing facility for Saudi Arabia, the U.N. report said.
“According to UAV experts familiar with this technology, such vertical gyroscopes have not been observed in any UAVs other than those manufactured by Iran,” Conflict Armament Research said in its report, which was funded by the European Union and the governments of Germany and the United Arab Emirates.
The U.N. report simply said that “the manufacturer of the gyroscope remains unknown.” However, it noted finding similar V10 gyroscopes “among the debris of both Samad and Qasef UAVs, which have been used by the Houthi forces.”

The U.N. also said its experts saw a V9 gyroscope on display in Washington at a military display showing an Iranian Shahed-123 that American officials say they recovered in Afghanistan in October 2016, after it crash-landed.
Images of the gyroscopes match those in the Conflict Armament Research report. A similar gyroscope could be seen inside a cruise missile seized by the U.S. Navy in a November raid on a traditional dhow shipping boat in the Arabian Sea. A computer terminal also seized with the missiles, likely used with the weapons, bore Farsi characters on its keyboard.
The U.S. Navy announced a new weapons cache find aboard a dhowin the Arabian Seathis month.Lt. Col. Earl Brown, a spokesman for the U.S. military’s Central Command, told the AP on Wednesday that American sailors found similar gyroscopes in that seizure as well.
The U.S. and the Saudi-led coalition have long said that Iran supplies weapons to the Houthis, ranging from assault rifles to the ballistic missiles fired into the kingdom.
Drones used by the Houthis have done everything, from crashing into Patriot missile batteries to exploding overhead and showering deadly shrapnel on targets. An exploding Houthi drone in a January 2019 attack on a military parade near Aden killed at least six people, including the commander of military intelligence for Yemen’s internationally recognized government. FILE – In this Sept. 18, 2019 file photo, the Saudi military displays what they say are an Iranian cruise missile and drones used in recent attacks on its oil industry at Saudi Aramco’s facilities in Abqaiq and Khurais, during a press conference in Riyadh, Saudi Arabia. A small instrument that two reports say was found inside drones which targeted the heart of Saudi Arabia’s oil industry and those in the arsenal of Yemen’s Houthi rebels, matches components recovered in downed Iranian drones in Afghanistan and Iraq. Conflict Armament Research said in a report released on Wednesday, Feb. 19, 2020, that these gyroscopes within the drones have only been found inside those manufactured by Iran. (AP Photo/Amr Nabil, File)

Iran, in turn, has long denied arming the Houthis, but that veil slowly lifted after the January U.S. drone strike killed Iranian Revolutionary Guard Gen. Qassem Soleimani, whose expeditionary Quds Forces led Iran’s work with allied proxy forces in Yemen and elsewhere. Gen. Amir Ali Hajizadeh of the Guard’s aerospace program recently gave a speech in front of a Houthi flag, as well as those of the Lebanese militant group Hezbollah, Hamas and others in an effort to project Iran’s power.
But previously, Iran’s murky arming of militant groups gave it plausible deniability and an ability to strike at opponents without being directly blamed, analysts say. While the wider confrontation with the U.S. since President Donald Trump pulled out of Iran’s nuclear deal with world powers has seen Tehran’s military claim launched attacks, other claims still could come from Tehran-allied militants.
That makes tracing weapons important, Leff said. The Conflict Armament Research report also said some components used in Houthi drones had been seen in homemade explosives recovered on the island nation of Bahrain as well.
“For them to line up with many of the components that we’re seeing in these UAVs for us suggests that there are some well-established supply lines,” he said. “There’s another research question that would be drilling down to, you know, who are the parties involved in actually trafficking these items into Yemen. That we have less information on.”