Iraqis Rally Against US Troops, Demanding They Leave 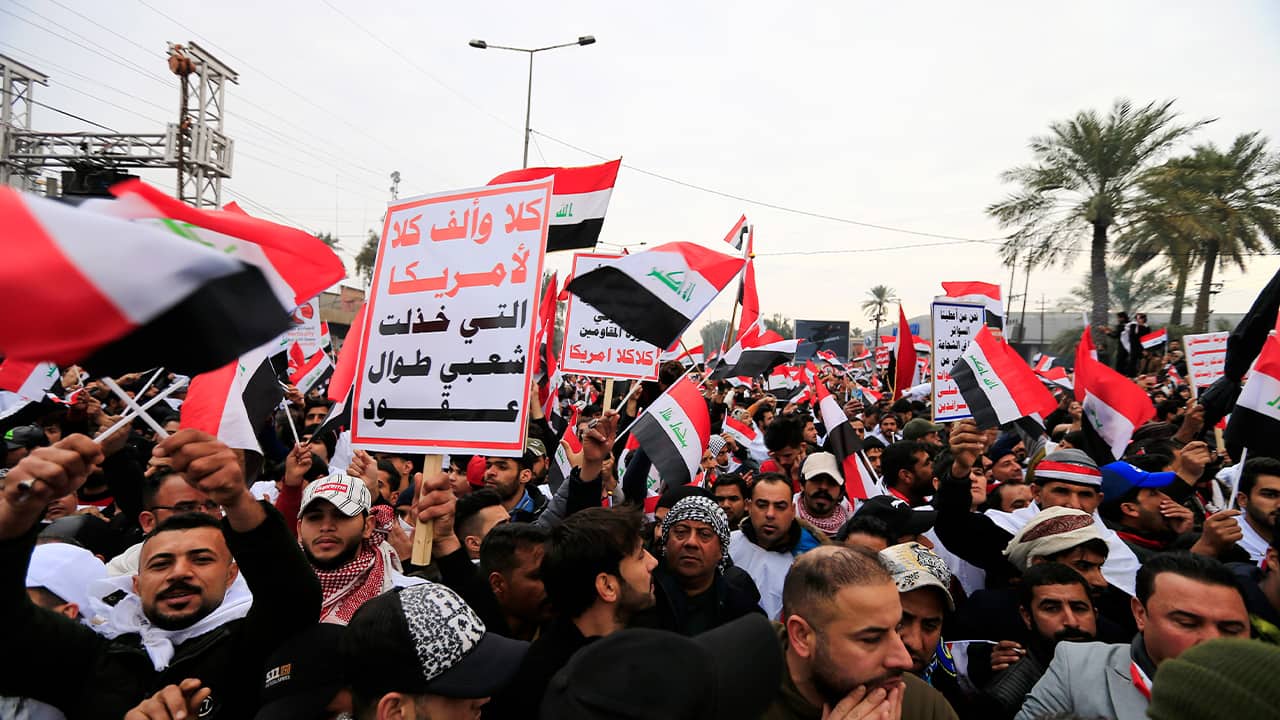 BAGHDAD — Waving national flags and banners denouncing U.S. President Donald Trump, tens of thousands of Iraqis marched peacefully through Baghdad on Friday to demand the ouster of U.S. troops from their country in a protest organized by a populist Shiite cleric.
Later Friday night, two anti-government protesters were shot and killed by security forces in separate demonstrations a few miles from where the big anti-U.S. rally had taken place, two medical officials and one security official said.

Apparently seeking to show control, his supporters did not clash with the heavy security presence or target the separate, anti-government protests in neighboring Tahrir Square, a possibility feared by activists.
In his weekly Friday sermon, Grand Ayatollah Ali al-Sistani, Iraq’s most revered Shiite cleric, called on political parties stop stalling and move the talks forward.
“The formation of the new government is constitutionally long overdue, it is necessary for the various parties concerned to cooperate,” al-Sistani said in a sermon delivered via a representative,“it is an important step toward resolving the current crisis.”
Roads and bridges leading to the heavily fortified Green Zone, the seat of Iraq’s government and home to several foreign diplomatic compounds including the U.S. Embassy, were barricaded by concrete barriers. Iraqi security forces stood guard, blocking access to the gates of the zone.
The protesters, mostly Shiites from the capital but also from Iraq’s southern provinces, walked to an assembly point in the Jadriya neighborhood.
Al-Sadr, whose party won the most seats in the May 2018 parliamentary elections, had called the rally to demand the withdrawal of American troops following the Jan. 3 U.S. drone strike near Baghdad’s airport that killed top Iranian Gen. Qassem Soleimani and senior Iraqi militia commander Abu Mahdi al-Muhandis. The killing drew the ire of Iraqi officials from across the political spectrum.
According to U.S. military officials, rather than draw down, Americans have poured 20,000 additional troops in the Middle East to counter what Washington describes as an escalating threat from Iran. There are about 5,200 U.S. troops in Iraq, where they help train and assist Iraqi forces in the fight against the Islamic State group.
Iran has long sought the withdrawal of American forces from neighboring Iraq, but the U.S. strike that killed Soleimani in Baghdad has added new impetus to the effort. Followers of Shiite cleric Muqtada al-Sadr gather in Baghdad, Iraq, Friday, Jan. 24, 2020. Thousands of supporters of an influential, radical Shiite cleric gathered Friday in central Baghdad for a rally to demand that American troops leave the country amid heightened anti-US sentiment after a drone strike ordered by Washington earlier this month killed a top Iranian general in the Iraqi capital. (AP Photo)

The Rally Came at a Critical Time

In a statement Friday, al-Sadr called for canceling existing security agreements, closing U.S. military bases, ending the work of American security companies and shutting off access to Iraqi airspace.
If the conditions are met, “the resistance will temporarily stop until the last soldier leaves Iraq,” al-Sadr said, referring to American troops.


“The American forces should leave. I am ready to fight against the Americans if Muqtada al-Sadr asks us.” — Amer Saad, an 18-year-old protester
Al-Sadr, whose followers fought U.S. troops after the 2003 U.S.-led invasion to oust dictator Saddam Hussein, derives political capital from his ability to call on supporters to clog streets and paralyze all movement in Baghdad.
The rally came at a critical time as rival political blocs are jockeying over the selection of a prime minister to replace outgoing Adel Abdul-Mahdi. It was supported by mainstream Shiite parties, including that of al-Sadr’s political rival Hadi al-Ameri, who heads the Fatah bloc in parliament, as well as the Popular Mobilization Units, an umbrella group comprised of an array of militias, including Iran-backed groups.
Al-Sadr “proved once again he can amass the crowds to take them to the street, cleverly prevented any targeting of protesters in Tahrir Square,” tweeted Farhad Alaadin, head of the Iraqi Advisory Council and a former presidential adviser.
In response to a public outcry over the U.S. airstrike that killed Soleimani and al-Muhandis, parliament passed a nonbinding resolution calling on the government to expel foreign troops. Kurdish and most Sunni lawmakers boycotted the vote.
“The American forces should leave,” said an 18-year-old protester, Amer Saad. “I am ready to fight against the Americans if Muqtada al-Sadr asks us.”
Police and militiamen of the Popular Mobilization Units also closed off roads leading to the protest site, in both the Karada and Jadriya neighborhoods.

The Protesters Had Clashed With the Forces Near a Key Highway

A different set of protesters in Tahrir Square, who have been carrying out separate demonstrations since October critical of government corruption, high unemployment and Iranian influence in Iraqi politics, carefully watched al-Sadr’s anti-U.S. rally, but no confrontation took place.
They remained at their sit-in tents in the square, where they have been camped out for months, after Friday’s anti-U.S. demonstration ended.
After nightfall, two of the anti-government protesters were shot and killed and at least 26 were wounded when security forces opened fire with live ammunition to disperse the crowds, officials said, speaking on condition of anonymity in line with regulations.
The protesters had clashed with the forces near a key highway that connects areas east of the Tigris River and has been a focus of recent violence.
“I am not against the Sadrist movement’s demonstrations today, but if Muqtada asks for the exit of the Americans and nonintervention, he should raise the same slogan against Iranian interference, to be honest,” anti-government protester Yahya Mohammed said earlier in the day of the anti-U.S. crowds..
In neighboring Iran, Ali Shamkhani, the secretary of Iran’s Supreme National Security Council, said the Baghdad march was a “countdown” to expelling U.S. forces. “It indicated that Iraqi people are the flagship on the path of expelling the U.S. from the region,” he said.
Cleric Mohammad Hassan Abutorabifard who led Friday prayers in the Iranian capital, Tehran, told worshipers that Iraqis at the rally “stood by Iranians” following Soleimani’s killing.
“The legitimacy of the West-appointed puppet rulers in the region has totally collapsed,” he said.