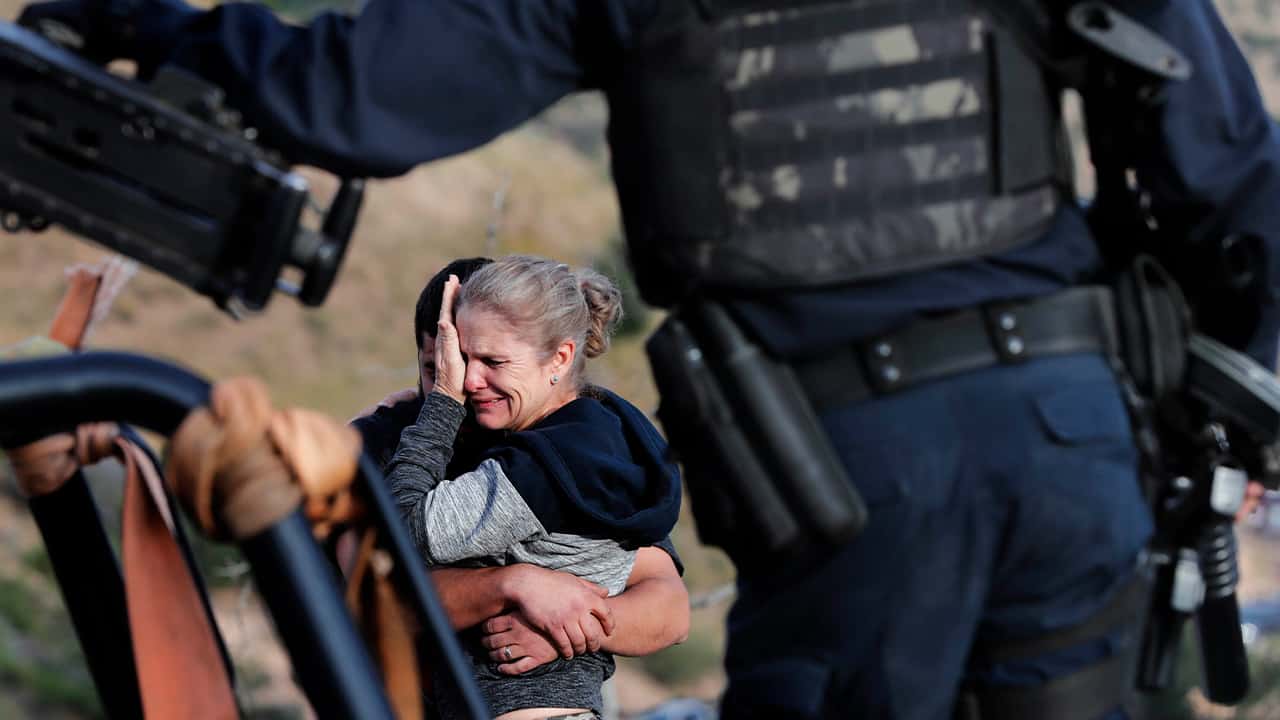 LA MORA, Mexico — With Mexican soldiers guarding the entrance to town, hundreds of people converged on this remote farming community for the first funerals Thursday for the nine American women and children killed in an ambush by drug cartel gunmen.
A single, large grave was dug to hold the remains of a woman and her two sons shot outside La Mora, a hamlet of about 300 people of dual U.S.-Mexican citizenship who consider themselves Mormon but are not affiliated with The Church of Jesus Christ of Latter-day Saints.

Men with shovels and a boy helped prepare the rocky soil in a small cemetery in the town about 70 miles south of the Arizona border, where American-style frame houses alternate with barns and orchards. Residents built the pine coffins by hand.
Patrols of Mexican army troops passed by regularly on the hamlet’s only paved road, providing security that was lacking the day of the killings.
Dawna Ray Langford, 43, and her sons Trevor, 11, and Rogan, 2, were to be laid to rest together, just as they died together Monday when attackers fired a hail of bullets at their SUV on a dirt road leading to another settlement, Colonia LeBaron, in neighboring Chihuahua state.
The other victims are expected to be buried in Colonia LeBaron later. But the two communities, whose residents are related, drew together in a show of grief Thursday, as black-clad mourners embraced each other.
Dozens of high-riding pickups and SUVS, many with U.S. license plates from as far away as North Dakota, traveled to La Mora over the dirt road where the ambush occurred. The road winds through desert, arid grasslands and pine-covered mountains.

Government Has Lost Control Over Vast Areas of Mexico

Gunmen from the Juarez drug cartel had apparently set up an ambush there as part of a turf war with the Sinaloa cartel, and the U.S. families drove into it.
At least 1,000 visitors bunked down in the hamlet overnight ahead of Thursday’s funeral, filling floor space in the 30 or so homes or sleeping in tents they brought with them. At least one cow was slaughtered to help feed the masses as well as the few dozen soldiers guarding the entrance.

And it called into question President Andrés Manuel López Obrador’s “hugs, not bullets” security strategy of trying to solve underlying social problems instead of battling drug cartels with military force.
It was also the latest shocking act of cartel violence to suggest that the old rules against killing foreigners, women or children are collapsing.
“The country is suffering very much from violence,” said William Stubbs, a pecan and alfalfa farmer who serves on a community security committee in the American-dominated hamlet of Colonia LeBaron. “You see it all over. And it ain’t getting better. It’s getting worse.” Men dig a mass grave for some of the women and children related to the extended LeBaron family who were killed by drug cartel gunmen, before their burial at the cemetery in La Mora, Sonora state, Mexico. Three women and six of their children were gunned down in an attack while traveling along Mexico’s Chihuahua and Sonora state border on Monday. (AP Photo/Marco Ugarte)

‘They Had to Have Known That It Was Women and Children’

Mexican officials said the attackers may have mistaken the group’s large SUVs for those of a rival gang. The Juarez drug cartel is fighting a vicious turf war against a faction of the Sinaloa cartel.
“Those who attacked the occupants, they let the children go, so we can deduce that it was not a targeted attack” on the families, said the army’s chief of staff, Gen. Homero Mendoza.


“Those who attacked the occupants, they let the children go, so we can deduce that it was not a targeted attack [on the families].” — Gen. Homero Mendoza, army’s chief of staff
But Julian LeBaron, whose brother Benjamin, an anti-crime activist, was killed by cartel gunmen in 2009, said relatives found evidence that the attackers knew exactly who they were killing.
“They had to have known that it was women and children,” Julian LeBaron said. He said eight children who survived reported that one mother got out of her SUV and raised her hands and was gunned down anyway.
Mexican officials said that the first vehicle in the caravan — where four children and their mother died — may have burst into flames after its gas tank was hit by gunfire.
But LeBaron said shell casings were found very close to the SUV, and the mother’s checkbook was discovered about 10 yards (meters) from the wreck, suggesting that somebody approached the SUV before it burned, “which means the vehicle was not on fire and these people torched it.”
Langford said he and others come and go frequently between La Mora and the U.S., working north of the border to build lives and families in a place he described as a “paradise” for children to grow up. Behind the lot where he and his wife raised 11 children, they can go fishing and swimming.
“Now this place is going to become a ghost town,” he said. “A lot of people are going to leave.”