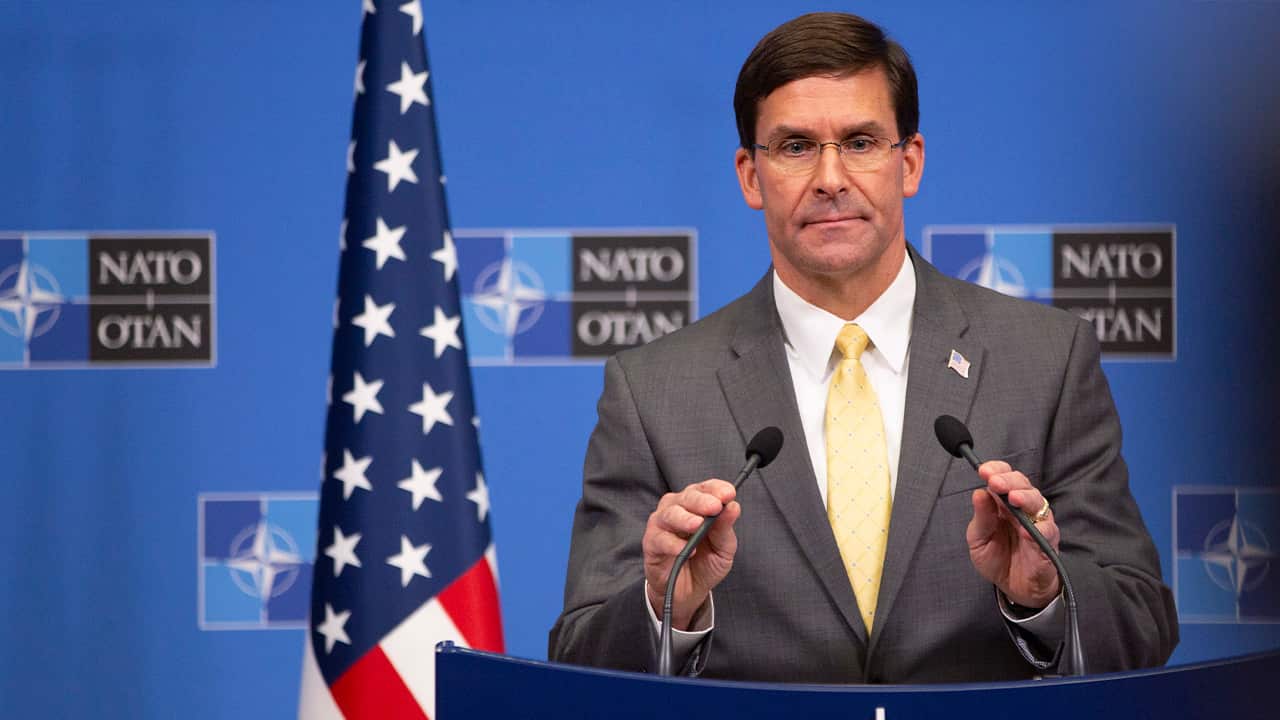 BRUSSELS — The U.S. will send armored reinforcements into eastern Syria to bolster defenses against a potential move by Islamic State militants on oil fields controlled by U.S.-backed Syrian Kurds, U.S. Defense Secretary Mark Esper said Friday.
Esper described the added force as “mechanized,” which would likely means it will include tanks and other combat vehicles such as Bradley armored infantry carriers. This would introduce a new dimension to the U.S. military presence, which largely has been comprised of special operations forces not equipped with tanks or other armored vehicles.
It also would partially reverse the ongoing shrinkage of the U.S. troop presence in Syria. President Donald Trump has ordered the withdrawal of nearly all 1,000 U.S. troops who had been partnering with a Syrian Kurdish-led militia against the Islamic State group. That withdrawal is proceeding even as Esper announced the plan to put reinforcements in the oil-producing area.
Although Esper did not mention the size of the U.S. reinforcements, it could total several hundred troops because fuel-guzzling tanks and other armored vehicles depend on a large supply and logistical support group.
Esper’s announcement came even as Trump again indicated in tweets that the U.S. military mission in Syria is completed. He previously has acknowledged a willingness to help protect the oil fields in eastern Syria, suggesting they could benefit the Kurds as well as the U.S., although those resources belong to the Syrian government.
“Oil is secured,” Trump tweeted Friday. “Our soldiers have left and are leaving Syria for other places, then…. COMING HOME! … When these pundit fools who have called the Middle East wrong for 20 years ask what we are getting out of the deal, I simply say, THE OIL, AND WE ARE BRINGING OUR SOLDIERS BACK HOME, ISIS SECURED!”

….COMING HOME! We were supposed to be there for 30 days – That was 10 years ago. When these pundit fools who have called the Middle East wrong for 20 years ask what we are getting out of the deal, I simply say, THE OIL, AND WE ARE BRINGING OUR SOLDIERS BACK HOME, ISIS SECURED!

Asked about America’s shifting Syria strategy, Esper said the U.S. mission has always been to prevent the resurgence of IS. “That mission remains unchanged,” he said.
But Esper said at NATO that the U.S. is “considering how we might reposition forces in the area in order to ensure we secure the oil field.” He added: “We are reinforcing that position. It will include some mechanized forces.”
The defense secretary did not provide details on the makeup of the reinforcements. He made clear their main purpose is to prevent IS from regaining access to Syrian oil, which prior to 2017 was a major source of its revenue.
Starting in late 2015 and continuing for many months, the U.S. conducted airstrikes against a range of oil resources in the Deir el-Zour province that had been taken over by IS. The attacks damaged or knocked out oil tanker convoys, oil processing plants, storage facilities, pumping stations, pipelines and refineries. It was called Operation Tidal Wave II, after a World War II air campaign to hit Romania’s oil industry.
Esper said IS must not be allowed to again threaten the oil.
“If ISIS has access to the resources, and therefore the means to procure arms or to buy fighters or whatever else they do, then it means it makes it more difficult to defeat ISIS,” he said.
Esper’s comments at a news conference at NATO headquarters in Brussels reflected one more change in what has been a rapidly shifting U.S. stance on American forces in Syria.
Just last week, Trump insisted that all American forces in Syria would come home. Then he said the 1,000 in the north would return home and that American troops in the south, numbering about 200 the Al-Tanf garrison in the south, would stay there.

Trump in the past days has turned a greater focus on the Syrian oil facilities in the eastern part of the country, saying U.S. will stay in Syria to protect them.
According to officials, top military leaders have pushed for the U.S. to leave forces in Syria to guard against an IS resurgence. While the group’s physical zone of control was largely destroyed by U.S. and Syrian Kurdish forces, insurgents remain in small pockets throughout the country and in Iraq.