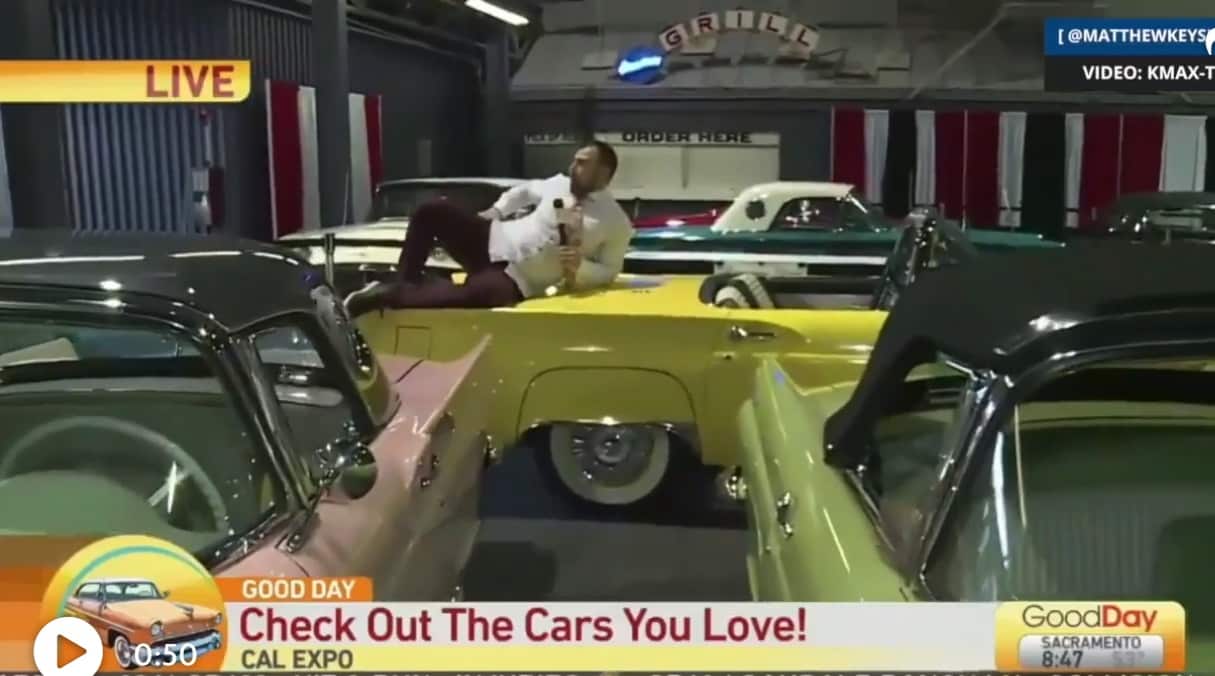 SACRAMENTO — Maybe the “Good Day Sacramento” reporter just thought he’d drive a little more traffic to his television station’s website when he climbed on top of a classic 1950s Thunderbird convertible and struck a silly pose, putting his feet on its pristine yellow paint job.


“So I’m just going to live on the wild side.” — Angel Cardenas
Instead, Angel Cardenas drew criticism of car-wreck proportions with his live broadcast for KMAX-TV from Sunday’s Sacramento International Auto Show. In the end it earned him his walking papers.
Cardenas began his live broadcast from the car show by saying he felt like a kid in a candy store with no one around to enforce any rules.
It was hours before the show was to open, he added, and no one was there to keep him off the cars, many of which he reported were off-limits.
“So I’m just going to live on the wild side,” he said before climbing onto the trunk of a yellow T-bird convertible.
Next up, he yanked open the door of a pink 1957 T-Bird, accidentally dinging its door against a green T-Bird parked next to it.
“Oh no, I hit that other car,” he said.
Then, looking around furtively, he quickly added, “I don’t think anyone saw it.”

He ended the segment with a grand finale of sorts, ignoring a “keep off” sign placed in front of a new Ford hybrid SUV and leaping onto its hood. The result was a loud crashing sound and the voice of someone off camera yelling, “Get off.”
“Oh boy, I’m going to get in trouble,” Cardenas says.
The car show’s producer, Stacey Castle Bascom, told the Sacramento Bee that KMAX officials told her Monday Cardenas had been fired.
KMAX and Cardenas did not immediately respond to emails from The Associated Press on Tuesday, and Cardenas was not pictured as among the “Good Day Sacramento” staff on the station’s website.
Cardenas says on his personal website he’s worked in all forms of broadcast news, including as reporter, anchor and camera operator in a career of more than a dozen years at several TV and radio stations.
Bascom said none of the cars were damaged but that the show’s producers were outraged nonetheless.
Indeed, Cardenas, who seemed to admire the cars, had violated a key tenet of the classic car community: You don’t touch another person’s ride without their permission, let alone jump all over it.
“These are antiques, and in many ways, objects d’art,” one Facebook poster explained. “One doesn’t do this in a museum.”