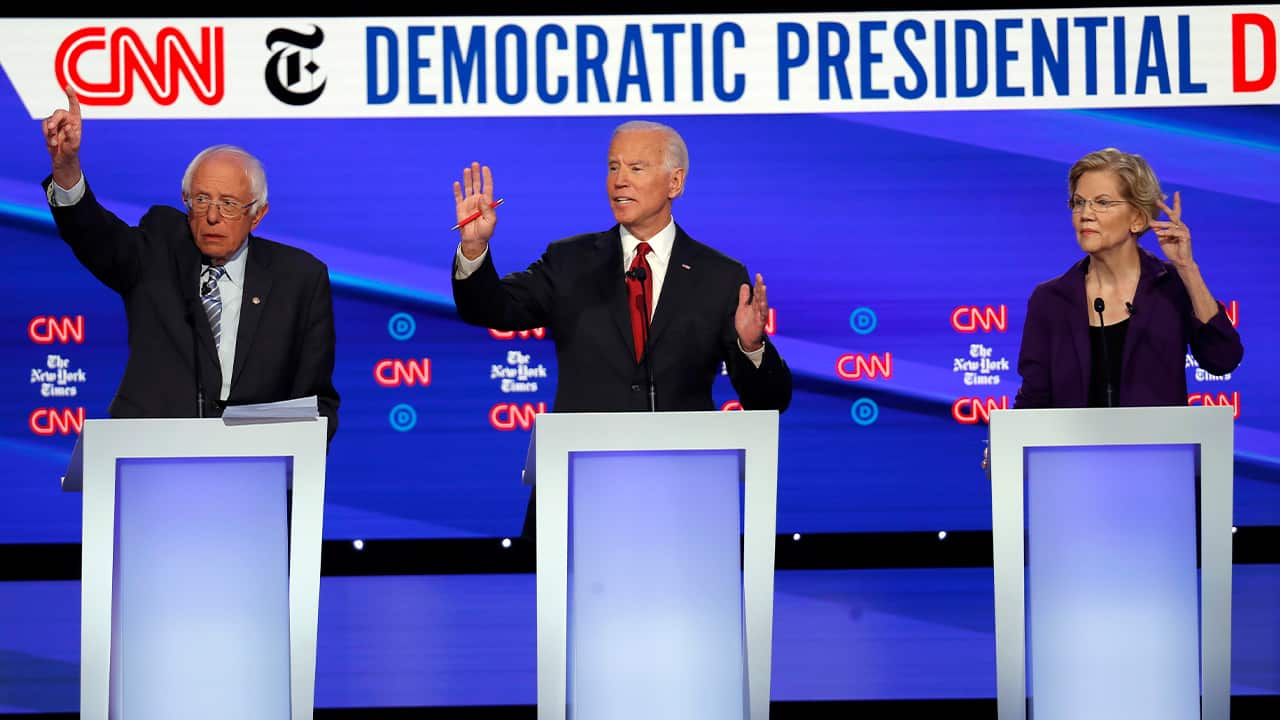 A dozen Democratic presidential candidates participated in a spirited debate over health care, taxes, gun control and impeachment. Takeaways from the three-hour forum in Westerville, Ohio:

Sen. Elizabeth Warren found Tuesday that her rise in the polls may come with a steep cost. She’s now a clear target for attacks, particularly from more moderate challengers, and her many plans are now being subjected to much sharper scrutiny.

The stage included three 70-something candidates who would be the oldest people ever elected to a first term as president — including 78-year-old Sanders, who had a heart attack this month. Moderators asked all three how they could do the job. None really addressed the question.
Sanders invited the public to a major rally he’s planning in New York City next week and vowed to take the fight to corporate elites.
Biden promised to release his medical records before the Iowa caucuses next year and said he was running because the country needs an elder statesman in the White House after Trump.
Warren, whose campaign has highlighted her hours-long sessions posing for selfies with supporters, promised to “out-organize and outlast” any other candidate, including Trump. Then she pivoted to her campaign argument that Democrats need to put forth big ideas rather than return to the past, a dig at Biden.

One Voice on Impeachment

The opening question was a batting practice fastball for the Democratic candidates: Should Trump be impeached?
They were in steadfast agreement. All 12 of them. Largely with variations on the word “corrupt” to describe the Republican president.
Warren was asked first if voters should decide whether Trump should stay in office. She responded, “There are decisions that are bigger than politics.”
Biden, who followed Sanders, offered a rare admission: “I agree with Bernie.”
The only hint of dissonance came from Rep. Tulsi Gabbard of Hawaii, who was one of the last Democratic House members to back an impeachment inquiry. She lamented that some Democrats had been calling for Trump’s impeachment since right after the 2016 election, undermining the party’s case against him. Klobuchar has faded into the background in previous debates, but she stood out on the crowded stage.
She also went on the attack. She chided Yang for seeming to compare Russian interference in the 2016 election to U.S. foreign policy. But her main barbs were reserved for Warren. “I appreciate Elizabeth’s work but, again, the difference between a plan and a pipe dream is something you can actually get done,” she said.
After Warren seemed to suggest other candidates were protecting billionaires, Klobuchar pounced. “No one on this stage wants to protect billionaires,” Klobuchar said. “Even the billionaire doesn’t want to protect billionaires.”
That was a reference to investor Tom Steyer, who had agreed with Sanders’ condemnation of billionaires and called for a wealth tax — despite the fact that his wealth funded his last-minute campaign to clear the debate thresholds and appear Tuesday night.
Klobuchar also forcefully condemned Trump’s abandonment of the Kurds in Syria.

New Jersey Sen. Cory Booker has been trying to campaign on the power of love and unity. It hasn’t vaulted him to the top of the polls, but it drew perhaps the biggest cheers from the crowd Tuesday night.