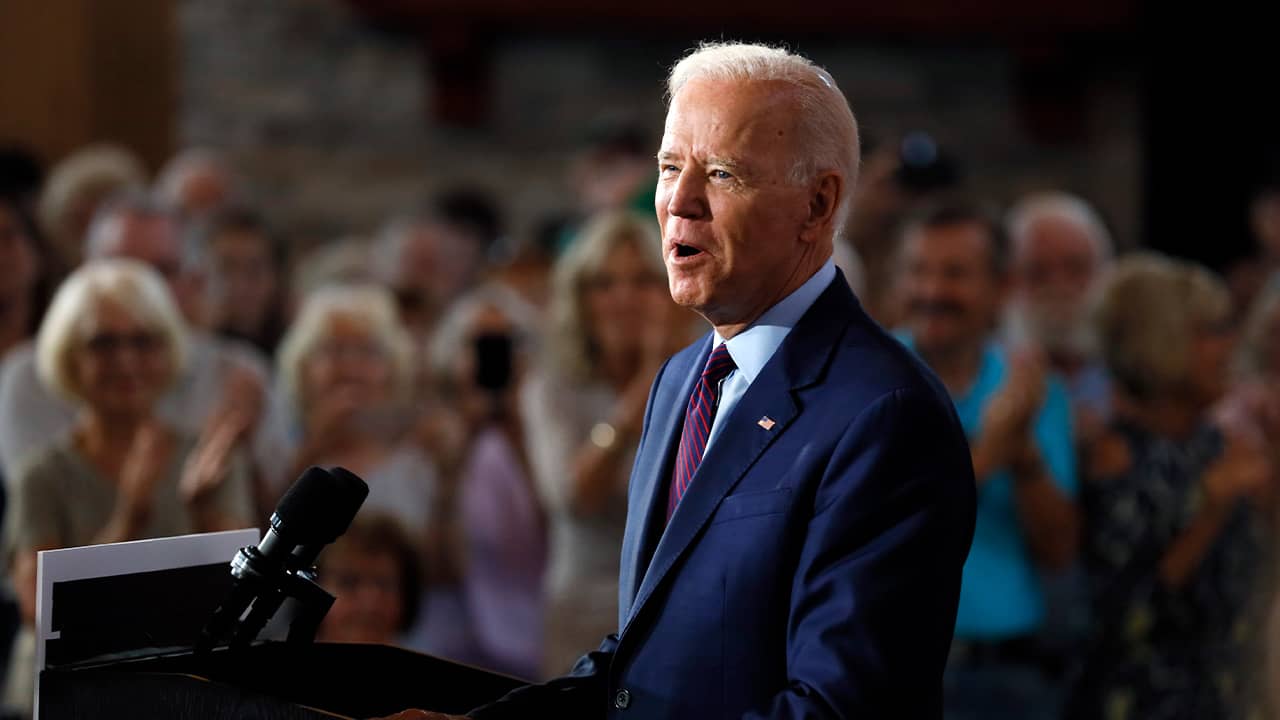 BURLINGTON, Iowa — Joe Biden on Wednesday accused President Donald Trump of “fanning the flames of white supremacy” in his most aggressive attack yet on the character of the man he would like to defeat in 2020.
“Trump offers no moral leadership,” Biden declared in Burlington, Iowa. The president “seems to have no interest in unifying the nation.”
Biden’s remarks, which have been echoed in some form by most of the Democratic presidential candidates, signaled how sharp and bitter the nation’s cultural and political divides will be on the long road to Election Day.
They also marked a moment of unity for Biden and his presidential rivals, who have turned on each other in recent weeks. But on Wednesday, they were nearly unanimous in their support of an aggressive plan to confront gun violence just days after another series of mass shootings elevated the issue to the forefront of the party’s presidential primary.
Virtually all of them vowed to ban assault weapons and high-capacity magazines, while some, like Cory Booker, called for requiring all gun owners to obtain licenses.
Hours before Biden lashed out against Trump in Iowa, Booker spoke in Charleston, South Carolina’s Mother Emanuel Church, where a white supremacist shot to death nine black parishioners four years ago. The New Jersey senator demanded bold action to stop gun violence.

“We must act to get weapons of war off our streets, out of our grocery stores, our bars, our temples and our churches by banning assault weapons once and for all,” a solemn Booker said.
While many Democrats have yet to take a firm position on licensing, their willingness to lean in on gun control marks a definite shift for the party. Democrats with national ambitions have traditionally feared alienating millions of gun owners by embracing plans to enact dramatic changes to the nation’s gun control laws.


Seismic Shift From Past Presidential Cycles

More than 90% of voters supported mandatory background checks for all gun purchases, according to a May poll conducted by Quinnipiac University; another 77% favored mandatory licenses for all gun purchasers and 63 percent support a nationwide ban on assault weapons.
“The 2020 aspirants on the Democratic side are all outmuscling each other to see who can have the most aggressive program on the issue of gun safety. That’s a seismic shift from past presidential cycles,” said John Feinblatt, president of Mayors Against Illegal Guns, which is hosting a presidential forum on gun control in Iowa this weekend.
The organization, backed by billionaire Michael Bloomberg, spent roughly $30 million to shape the 2018 midterm elections and will again spend a “significant” amount up and down the ballot in 2020, Feinblatt said.
John Anzalone, a veteran Democratic pollster who is advising Biden, acknowledged the party’s sudden willingness to embrace gun control.
“It’s no longer radical,” he said. “No one’s afraid of the NRA anymore.”
Despite the shifting political dynamics and surge in mass shootings, Republican leaders in Congress have blocked efforts to enact significant gun control legislation, including a relatively modest plan to require universal background checks.

Trump has periodically expressed support for gun control measures, but his administration has not followed through, and his political party in Congress has shown no appetite to address the issue.
There were early signs this week, however, that a bipartisan proposal by Sens. Lindsey Graham, R-S.C., and Richard Blumenthal, D-Conn., to adopt “red flag” laws is gaining some traction. The still-emerging plan would create a federal grant program to encourage states to adopt laws to take guns away from people believed to be a danger to themselves or others.
A similar bill never came up for a vote in the GOP-controlled Senate last year, but both parties express hope that this year will be different.
Trump has signaled support for the plan.
On Wednesday, Trump was visiting the Ohio and Texas communities that were still grappling with the fallout of the weekend shootings.
The president and first lady Melania Trump began their visit at the Ohio hospital where many of the victims of Sunday’s attack were treated. Outside Miami Valley Hospital, at least 200 protesters gathered, hoping to send a message to the president that they want action on gun control.
Democrats are eager to oblige.

In addition to pledging action on guns, many are linking the violence to Trump’s racist rhetoric, which includes warnings of an immigrant invasion.