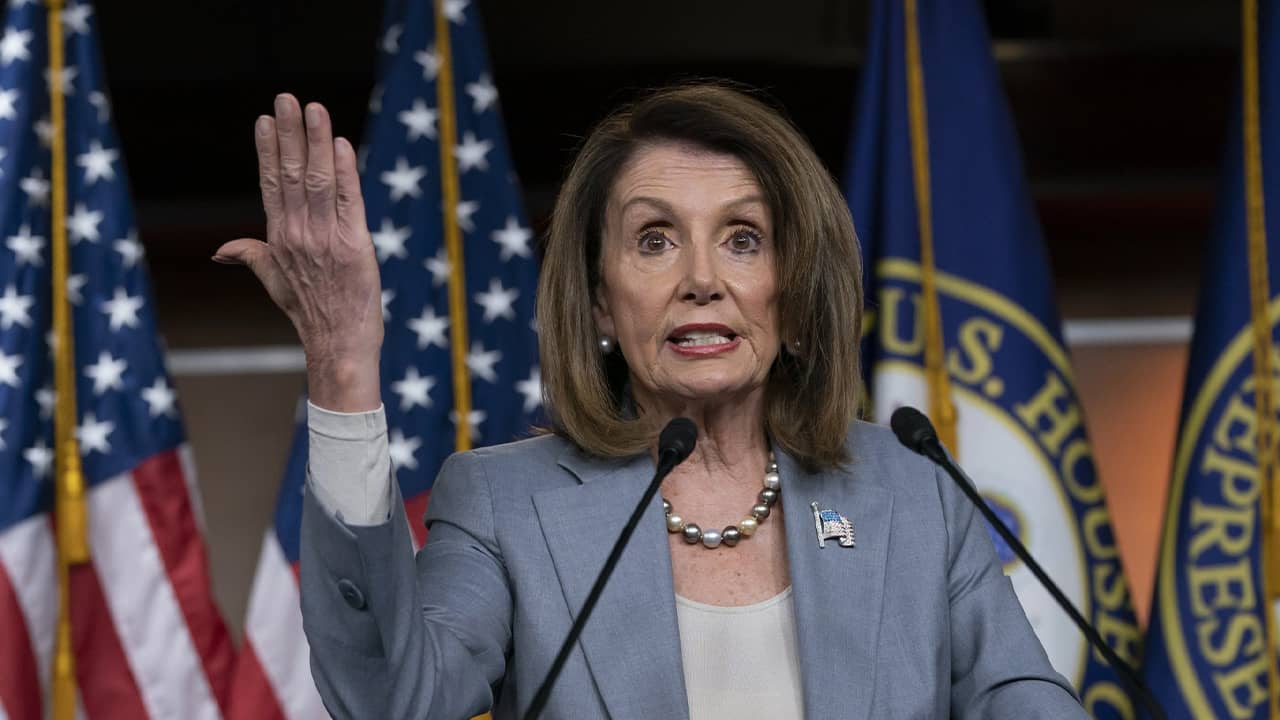 As Trump all but goads Democrats into impeachment proceedings , viewing the showdown as potentially valuable for his 2020 re-election campaign, Democrats are trying to show restraint. Their investigations are both intensifying but also moving slowly as Democrats dig into the special counsel’s Trump-Russia report and examine Trump’s finances and governance.

The more they push, the more Trump resists, the president making what Pelosi says is his own case for impeachment with his stonewalling of Congress.

She added, “He’s doing our work for us, in a certain respect.”

On Wednesday, Trump abruptly stalked out of a meeting with congressional leaders with a flat declaration he would no longer work with Democrats unless they drop all investigations.

Democrats said the walkout seemed scripted. House Speaker Nancy Pelosi called it all “very, very, very strange” and said she was praying for Trump and the nation.

‘Get These Phony Investigations Over’

After turning and leaving the three-minute non-meeting with the Democratic leaders, scheduled for a discussion of U.S. infrastructure problems, Trump strode to the Rose Garden where aides had gathered reporters and TV cameras for his demand that Congress drop its investigations that are increasingly leading to talk of what he called the “i-word” — impeachment.

Trump assailed Pelosi in particular for her comment earlier in the morning on Capitol Hill that she believed the president was engaged in a “cover up” of the Russia probe.

Trump said, “I walked into the room and I told Leader Schumer and Speaker Pelosi I want to do infrastructure,” referring to the top Democratic senator, New York’s Chuck Schumer.

“But you know what we can’t do it under these circumstances,” Trump said. “So get these phony investigations over.”

The president didn’t shake anyone’s hands or take a seat, but spent three minutes contending he had been prepared to work on infrastructure, trade and other issues but now he couldn’t because Pelosi said “something terrible,” according to an administration official and another person familiar with what happened in the room. Trump then left before anyone else could speak.

Pelosi said to those still in the room — no Republican lawmakers were there — that she had known the president was not serious about infrastructure and would find a way out, according to another person familiar with the meeting.

The meeting at the White House had been set weeks ago, after Trump and the Democratic leaders agreed to talk further about a possible $2 trillion infrastructure proposal. Trump was due to provide the Democrats his ideas on how to pay for it. Schumer said when Trump “was forced to say how he would pay for it he had to run away.”

They Note the Watergate Investigation

Despite the sudden turn of events, the outburst followed a familiar script of Trump convening leaders at the White House only to try to turn the tables and refocus attention. He has stormed out of previous sessions.

Earlier Wednesday, Pelosi told reporters after a private meeting of House Democrats that Trump is “engaged in a cover up,” even as she tried to tamp down some Democrats’ rush toward an impeachment inquiry in their showdown with the White House.

There is no actual process for self-impeachment. It’s a thought bubble more than a legal term. A pure Pelosi-ism, one that an aide says she coined herself.

But as a device, it’s a way for Pelosi to frame the often complicated idea of the White House refusing to engage with Congress in the traditional process of checks and balances.

“Sometimes people act as if it’s impeachment or nothing,” Pelosi told reporters. “No, it’s not that. It’s a path that is producing results and gathering information.”

In the aftermath of special counsel Robert Mueller’s investigation, the slow drip of congressional oversight also serves a dual purpose politically. It allows Democrats to keep impeachment proceedings at bay, despite calls to push ahead by the liberal flank, while stoking questions about Trump going into the 2020 presidential election.

They note the Watergate investigation dragged on two years before the House Judiciary Committee opened impeachment proceedings against President Richard Nixon. By the time articles of impeachment were drawn up, the third entry was Nixon’s obstruction of Congress.

Rather than viewing Mueller’s report as the end of the debate, Democrats in Congress have taken his findings as a green light to dig in with their oversight role.

So far, House committees have issued multiple subpoenas for executive branch information, including for an unredacted version of the Mueller report and some million of pages of underlying evidence; for testimony and documents from former White House counsel Don McGahn; for information on Trump’s business dealings; and for Trump’s tax returns.

Others subpoenas have been issued over the administration’s policies on migrant children and on citizenship questions on the census.

“My Democratic colleagues seem to be publicly working through the five stages of grief,” Senate Majority Leader Mitch McConnell mused in a floor speech. The Kentucky Republican scoffed at their “laughable threats of impeachment.”

As McConnell declared the “case closed,” he noted that the final stage of grief is acceptance. “For the country’s sake, I hope my Democratic friends get there soon,” he said.

Except Mueller’s 448-page report left Congress with questions. While the special counsel found no evidence the Trump campaign colluded with Russia to swing the 2016 election, Mueller did not render a decision on the question of whether the president obstructed justice in the investigation. “It also does not exonerate him,” the report says.

At least one Republican, Sen. Richard Burr of North Carolina, chairman of the Senate Intelligence Committee, appears to have questions, too. His committee issued a subpoena for testimony from one of the president’s sons, Donald Trump, Jr. The move sparked fierce blowback among allies of the White House and divided Senate Republicans into two camps: those who backed his oversight role and those who panned it.

Trump, during remarks at the White House, said he was “very surprised.”

“The Republicans would love us to begin impeachment process,” he said. “If we get to impeachment, we’re going to get there on our own schedule and for our own reasons, not because they need to throw some red meat to their base.” — Rep. Jamie Raskin

What his supporters want to know, the president said, is how the whole question of Russian interference first started. A top Trump ally in Congress, Sen. Lindsey Graham, R-S.C., is starting his own investigation into the investigation, picking up where House Republicans, when they controlled the committees before the lost he majority last year, left off.

“Our strategy right now is just to get to the truth and the facts,” said Rep. Jamie Raskin, D-Md., a member of the House Judiciary Committee.

Raskin said he kept a little chart on his notepad during a hearing last week, when the committee voted to hold Attorney General William Barr in contempt of Congress for refusing to turn over the full Mueller report, and it was the Republicans who most mentioned impeachment.

“The Republicans would love us to begin impeachment process,” he said. “If we get to impeachment, we’re going to get there on our own schedule and for our own reasons, not because they need to throw some red meat to their base.”

Iranian Lawmaker Says His Country Doesn’t Want War With US