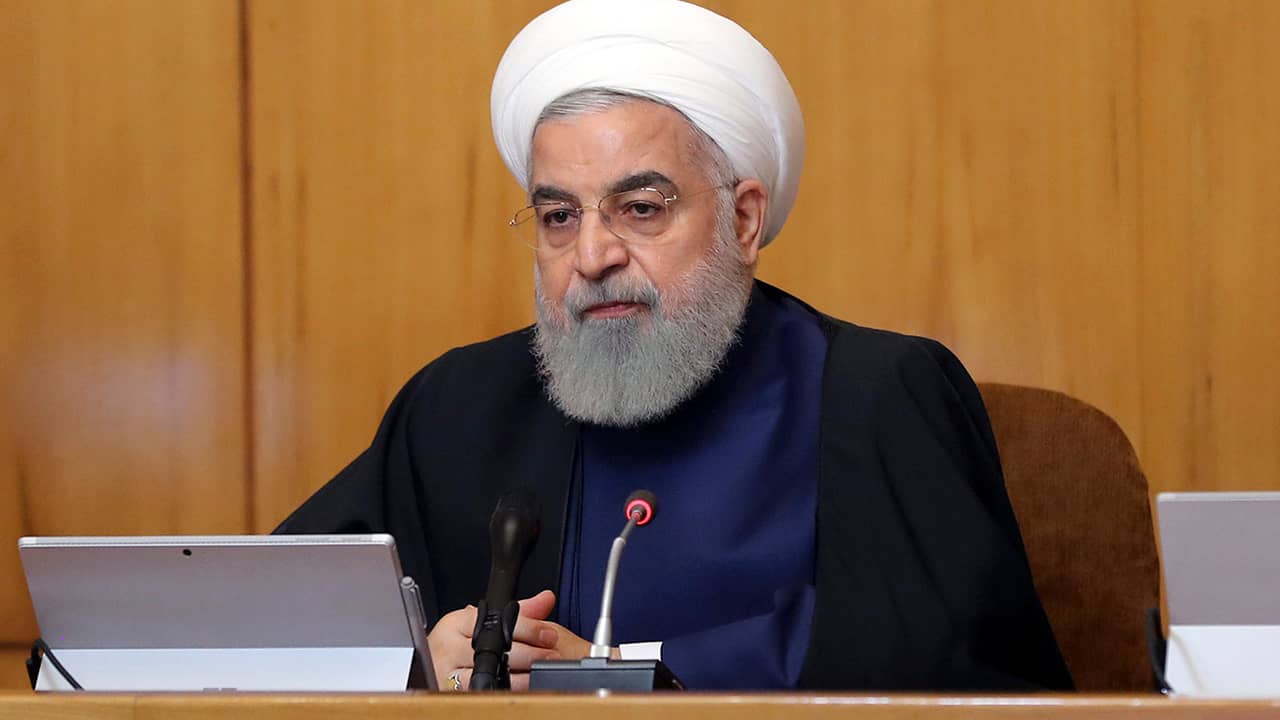 TEHRAN, Iran — Iran threatened Wednesday to enrich its uranium stockpile closer to weapons-grade levels in 60 days if world powers fail to negotiate new terms for its 2015 nuclear deal, raising regional tensions as a U.S. aircraft carrier and bombers headed to the Middle East to confront Tehran.

A televised address by President Hassan Rouhani, who once pledged that the landmark deal would draw Iran closer to the West, saw the cleric instead pressure Europe to shield Tehran from the sanctions imposed by President Donald Trump withdrawing the U.S. from the agreement exactly a year earlier.

“We felt that the nuclear deal needs a surgery, and the painkiller pills of the last year have been ineffective. This surgery is for saving the deal, not destroying it.” — President Hassan Rouhani

Rouhani’s threats put the world on notice that it cannot continue to rely on Iran complying with terms of the unraveling deal in the coming weeks. Meanwhile, a U.S. campaign of sanctions hammering Iran’s anemic economy and blocking its sale of oil on the global market is only making life worse, putting further pressure on both its Shiite theocracy and its 80 million people.

Rouhani himself compared the situation to a medical emergency for the Islamic Republic, only 40 years after its founding.

“We felt that the nuclear deal needs a surgery, and the painkiller pills of the last year have been ineffective,” Rouhani said. “This surgery is for saving the deal, not destroying it.”

Iran Threatens to Increase Its Enrichment of Uranium

Iran on Wednesday stopped its sale of excess uranium and heavy water as a first step, Rouhani said, something required under the deal. The U.S. last week ended deals allowing Iran to exchange its enriched uranium for unrefined yellowcake uranium with Russia, and to sell its heavy water, which is used as a coolant in nuclear reactors, to Oman.

In 60 days, if no new deal is in place, Iran will increase its enrichment of uranium beyond the accord-permitted 3.67%, which can fuel a commercial nuclear power plant. Rouhani did not say how far Iran would be willing to enrich, although the head of its nuclear program again reiterated Iran could reach 20% enrichment within four days.

Once a country enriches uranium to around 20%, scientists say the time needed to reach the 90% threshold for weapons-grade uranium is halved. Iran long has maintained its nuclear program is for peaceful purposes. However, Iranian state television’s English-language service Press TV, citing sources close to presidency, said the country would withdraw from the Nuclear Nonproliferation Treaty if Europeans sought to sanction Iran at the U.N. Security Council.

Rouhani also said that if the 60 days pass without action, Iran will halt a Chinese-led effort to redesign its Arak heavy water nuclear reactor. Such reactors produce plutonium that can be used in nuclear weapons.

Iran notified Britain, Russia, China, the European Union, France and Germany of its decision earlier in the day. All were signatories to the nuclear deal and continue to support it. Iranian Foreign Minister Mohammad Javad Zarif met Wednesday in Moscow with his Russian counterpart Sergey Lavrov and offered a letter as well.

“If the five countries join negotiations and help Iran to reach its benefits in the field of oil and banking, Iran will return to its commitments according to the nuclear deal,” Rouhani said.

Zarif separately issued his own warning from Moscow.

“We will not allow Iran to obtain nuclear weapons. We will continue to fight those who seek to take our lives, and we will thrust our roots even deeper into the soil of our homeland.” — Israeli Prime Minister Benjamin Netanyahu

“After a year of patience, Iran stops measures that (the) US has made impossible to continue,” he tweeted. World powers have “a narrowing window to reverse this.”

“I heard that Iran intends to continue its nuclear program. We will not allow Iran to obtain nuclear weapons,” Netanyahu said. “We will continue to fight those who seek to take our lives, and we will thrust our roots even deeper into the soil of our homeland.”

U.S. Secretary of State Mike Pompeo, in London, said America “will wait and observe” what Iran does next.

“They have made have made a number of statements about actions they have threatened to do in order to get the world to jump,” Pompeo said.

Rouhani also made an implicit threat as well to Europe, saying Iran now cooperates on issues like targeting Afghan opium and hashish traffickers and controlling immigration.

“You are obliged … for your own security, for protecting your youths against drugs as well as controlling influx of immigrants,” the president said.

Iran’s move comes at a sensitive moment in the wider Middle East. The White House said it dispatched the aircraft carrier USS Abraham Lincoln and B-52 bombers to the Persian Gulf over what it described as a new threat from Iran. Israel, which has conducted pre-emptive bombings of nuclear facilities in Iraq and Syria, has vowed to never allow Iran to obtain an atomic weapon.

Apparently responding to that, the general staff of Iran’s armed forces issued a statement applauding Rouhani’s decision and warning its enemies.

“Any possible movement by them will face a regrettable response by Iranian nation and its armed forces,” the statement said, according to the semi-official Fars news agency.

The 2015 deal lifted sanctions on Iran in exchange for limits on its nuclear program. It reached the deal after years of negotiations, including secret talks in Oman between Iran and the administration of former President Barack Obama.

The U.S. withdrew from the deal under Trump, whose administration contends the accord should have limited Iran’s ballistic missile program and what it describes as Tehran’s malign regional influence.

However, the U.N.’s atomic watchdog, the International Atomic Energy Agency, repeatedly has verified that Iran stuck to terms of the deal. The agency did not respond to a request for comment Wednesday.

After the U.S. withdrew from the accord, it restored the crippling sanctions, exacerbating a severe economic crisis. The Iranian rial, which traded at 32,000 to $1 at the time of the accord, traded Wednesday at 153,500.

“I do not understand the terms and words of officials. They should do something to make our life easier. I hope the new decision will have such an impact.” — Zahra Ahari, a 43-year-old homemaker

That Iran chose to keep its excess uranium and heavy water first, rather than abandon the accord in its entirety, shows it still hopes to secure a deal. In years of negotiations over its nuclear program, Iran similarly has gone step-by-step in ramping its activities while holding talks. It also protects Rouhani, a relative moderate cleric within Iran’s Shiite theocracy, from criticism by hard-liners who long maintained Iran gave up too much in the nuclear deal.

On the streets of Tehran, the mood was mixed as people are struggling to make ends meet as the Iranian currency collapses.

“It was a good but late decision by Iran,” said Soroush Kamali, a 21-year-old geography student. “The West should learn that they cannot remain idle while Iranian people are suffering from sanctions.”

Zahra Ahari, a 43-year-old homemaker, simply wished for things to get better.

“I do not understand the terms and words of officials. They should do something to make our life easier,” Ahari said. “I hope the new decision will have such an impact.”