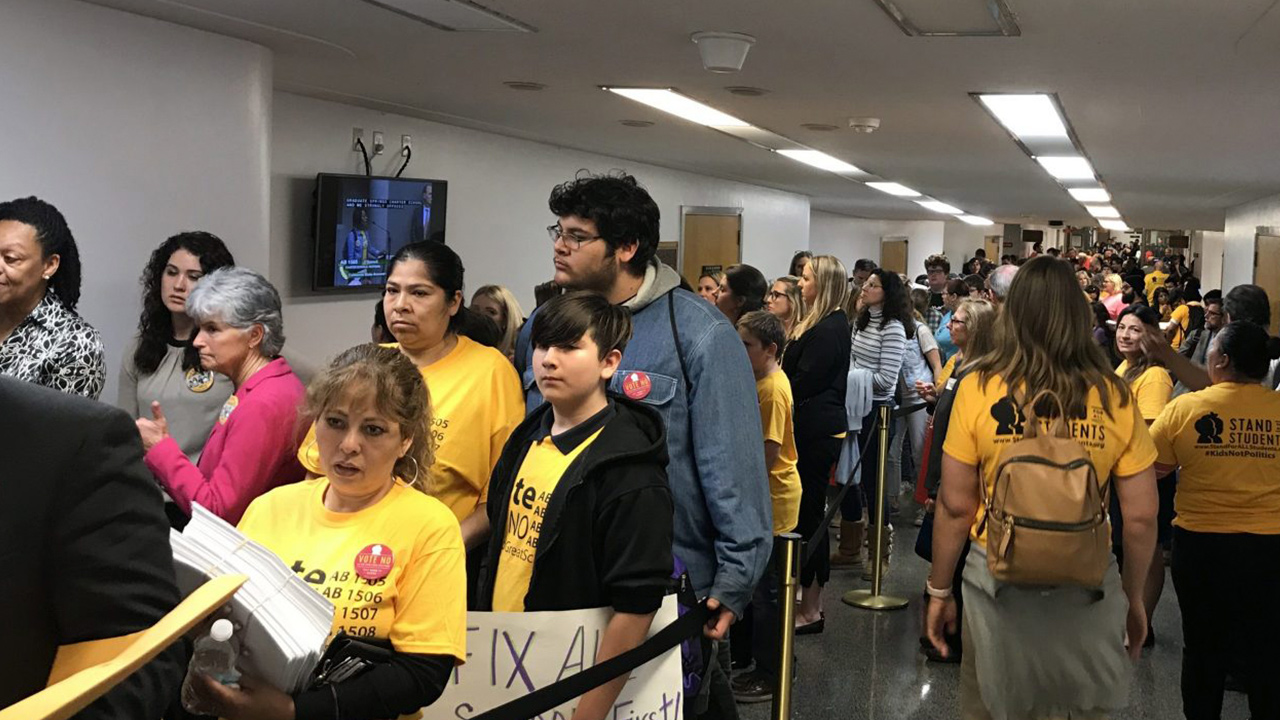 As charter school advocates rallied en masse and California’s teachers’ unions flexed their political muscle, a cluster of bills that would dramatically curb the growth of charters in the state cleared the Assembly Education Committee on Wednesday. The votes were the first in what figures to be a lengthy, high-stakes battle this session between two of the state’s most powerful education interests.

That the legislative panel passed Assembly Bills 1505, 1506 and 1507 on Wednesday wasn’t surprising — the authors of the trio of bills sponsored by the California Teachers Association made up two-thirds of the panel, which is chaired by a longtime public school teacher and former member of the CTA’s policymaking assembly.
But the hearing, which featured more than five hours of impassioned debate and testimony from hundreds of people, offered a glimpse of just how consequential the charter proposals are to teachers unions and charter advocates.
While the two sides have battled for decades — typically to a draw — the political momentum has shifted in favor of organized labor this session.
A wave of high-profile teacher strikes this year in Los Angeles and Oakland put the spotlight on unions’ claim that the growth of charter schools, which are mostly nonunion, has financially stressed traditional public schools, siphoning enrollment and public funding.

The New Law Had Been Vetoed by Gov. Jerry Brown

And following the strikes, Gov. Gavin Newsom, who won office with the support of organized labor, signed fast-tracked legislation that requires charter schools to follow the same open-meeting and conflict of interest laws as school districts. The new law and other charter restrictions had been vetoed by Gov. Jerry Brown.

Combined, the bills would give local school districts the sole power to authorize charter schools, create state and local caps on the number of charters allowed to operate, and put strict limits on charter school locations.

A fourth bill sponsored by the state teachers’ union, Senate Bill 756, was not heard Wednesday but calls for a five-year moratorium on charters unless the Legislature passes specific charter reforms by 2020.
The latest legislative battle over charter schools comes as Newsom has directed state schools superintendent Tony Thurmond to lead a panel to study the financial impact charter schools have on school districts with recommendations due by July 1.
Assemblywoman Shirley Weber, a Democrat from San Diego, cited this ongoing study as her reason for not voting in support or opposition of any of the three charter bills Wednesday. She noted that the fate of the bills was “a done deal because four of the six members of this dais are co-authors of these bills.”
“There’s no question that after 26 years, there’s a need for a serious discussion about charters in California,” Weber said as the committee debated AB 1505, later adding, “I can’t support it [AB 1505] until I get more information.”
McCarty, the author of the charter cap bill, noted that previous charter legislation battles have drawn out through the end of session, and that “we’ll be going at it, as we know, until the end of summer, end of August, early September.”
“The report that the governor and the [state superintendent] are working on will be out within a couple of months and allow us to take a look at their findings and recommendations and potentially bridge them into the proposals that we have here,” McCarty said.

Unions and Charter Advocates Have Feuded for Years

As Wednesday’s hearings unfurled, the scene at the Capitol was raucous. A line of hundreds of teachers, parents, students, administrators clad in red (in support of teachers unions) and yellow (supporting charters) snaked outside the packed Assembly hearing room where legislators debated the charter bills. Opponents outnumbered those in support.

'I Know Nothing' – Trump Changes His Tune on WikiLeaks