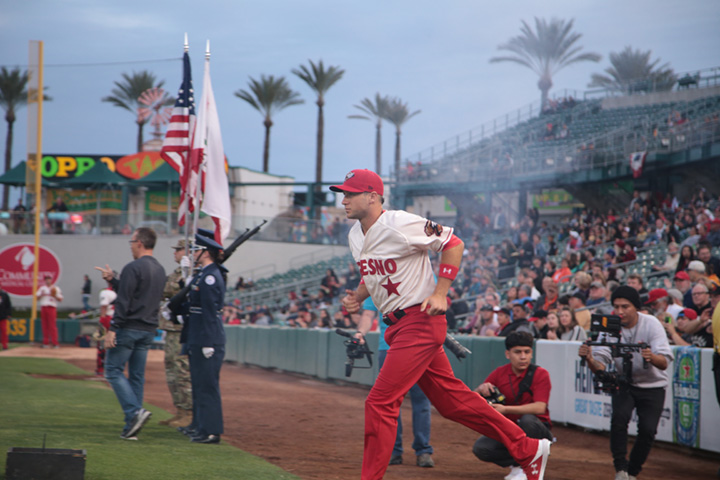 The buzz is back. Baseball returned for the 17th Opening Night at Chukchansi Park, and with it a renewal of hope and optimism.
It applied to Fresno Grizzlies on the field, in their first year as an affiliate of the Washington Nationals, as well as the politicians involved in the pre-game ceremonies.

A Reconciliation That Lasted Three Hours

After a rough week of politics where Fresno City Councilmembers jousted verbally on how to spend $12 million in gas tax funds for road repairs, everyone appeared to put their differences aside.
On Tuesday, northeast councilman Garry Bredefeld called the southeast representative Miguel Arias a bully and rude. On the field before the game, the two were joking, laughing, and putting their arms around each other.
A picture I posted of the reconciliation on Twitter elicited lots of reaction.

Fellow councilman Luis Chavez of southeast Fresno (who was not present) posted a meme of Rocky Balboa and one-time nemesis Apollo Creed celebrating in the ocean. He then posted a meme of a fat Rocky, clarifying that it represented Arias.
It seemed the lovefest ended on Twitter a few hours later. Arias and Bredefeld started sniping at each other again.

Called no one a name, just called out the disrespect to our veterans and flag and always will. Stop bullying staff and other people and you won’t get called out on it. If you can’t deal with it, treat staff with respect or find a safe zone. Also, don’t flip off our police chief!

Just hours earlier, the black community lambasted Steve Brandau (District 2) for comparing spending those road repair dollars in the south end of town to slavery reparations. At the stadium, Brandau didn’t want to talk about his day. But, he did admit he threw one of the worst ceremonial first pitches ever: off target and on a hop.

An announced crowd of 9,155 witnessed changes to the team and the stadium. Most notable are the new areas on the concourse above left and right field.
New at the park is the Fresno Social lounge, a free-standing bar perched above left field. The team replaced the seats below with tables for fans to enjoy their food and drink.
Former congressional candidate Elizabeth Heng was among those fans. She gushed about the lounge, wanting to tell all her friends about it.
On the other side of the stadium is Splash Park, above right field. Behind the fence is a seating berm — picnic style on artificial grass. With the short fence in right, it seems to be a great place to catch the game.
Above it on the concourse is a splash zone, with water spouting out of bats and balls. It didn’t matter that kids didn’t have swim gear at the ready. They didn’t seem to mind getting doused in full clothing.

And, the Grizzlies debuted new uniforms, replete with red pants.
One player said they were comfortable. He wouldn’t comment about the fashion statement the red made.
An executive with the Nationals said the pants looked good … for golf.
Some on social media weren’t fans. 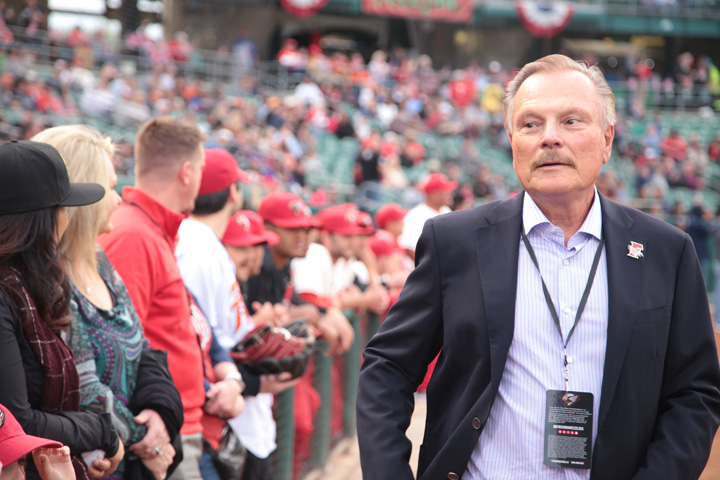 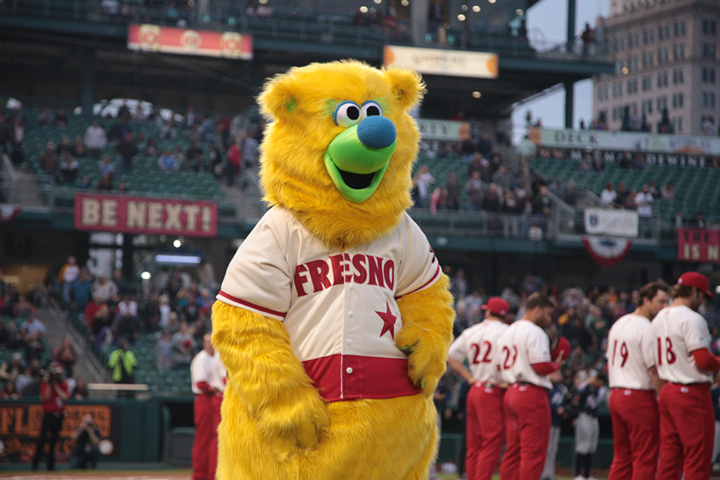 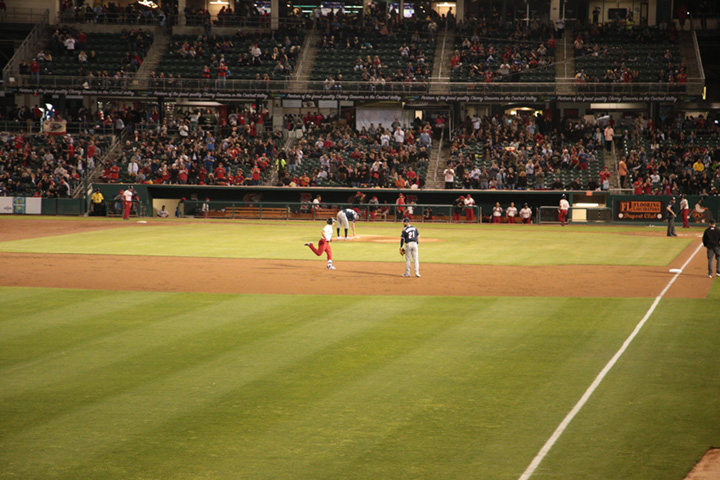 IMG_9393-Fresno-Social
Fresno Social is a new feature at Opening Night at Chukchansi Park in Fresno on April 4, 2019 (GV Wire/Jahz Tello) 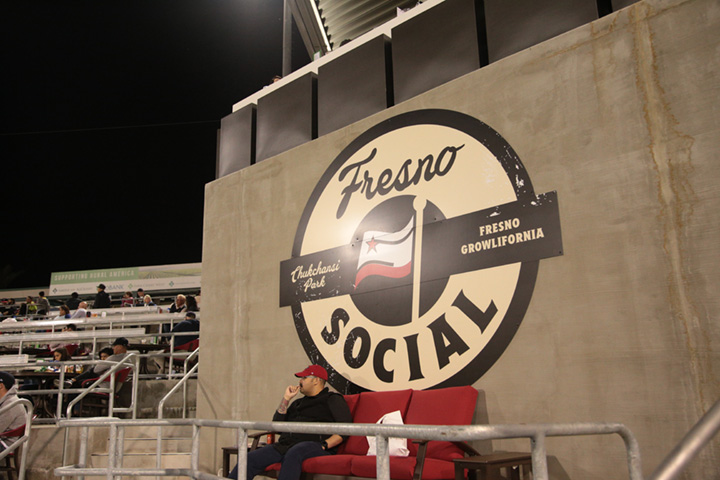 IMG_9429-Splash-Park-berm
The Splash Park is a new feature at Opening Night at Chukchansi Park in Fresno on April 4, 2019 (GV Wire/Jahz Tello) 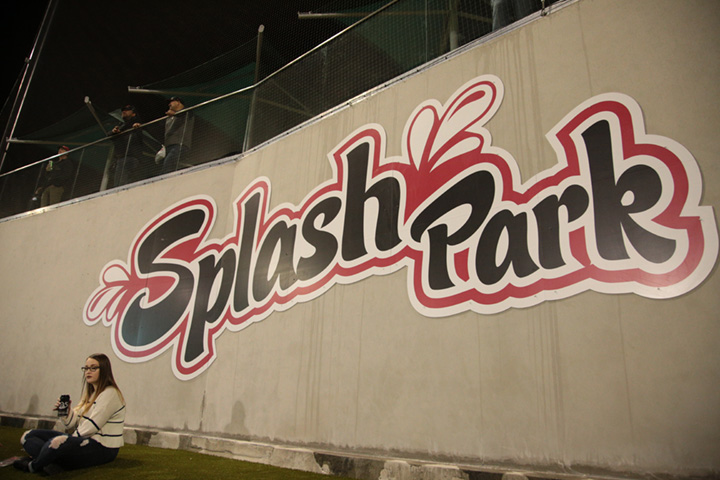 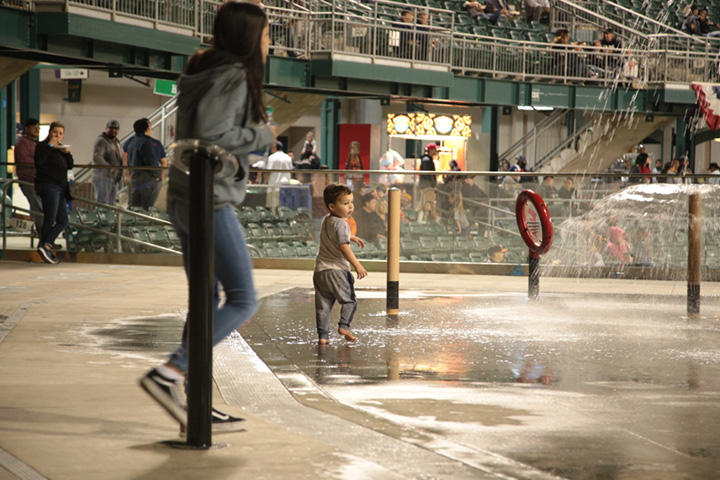