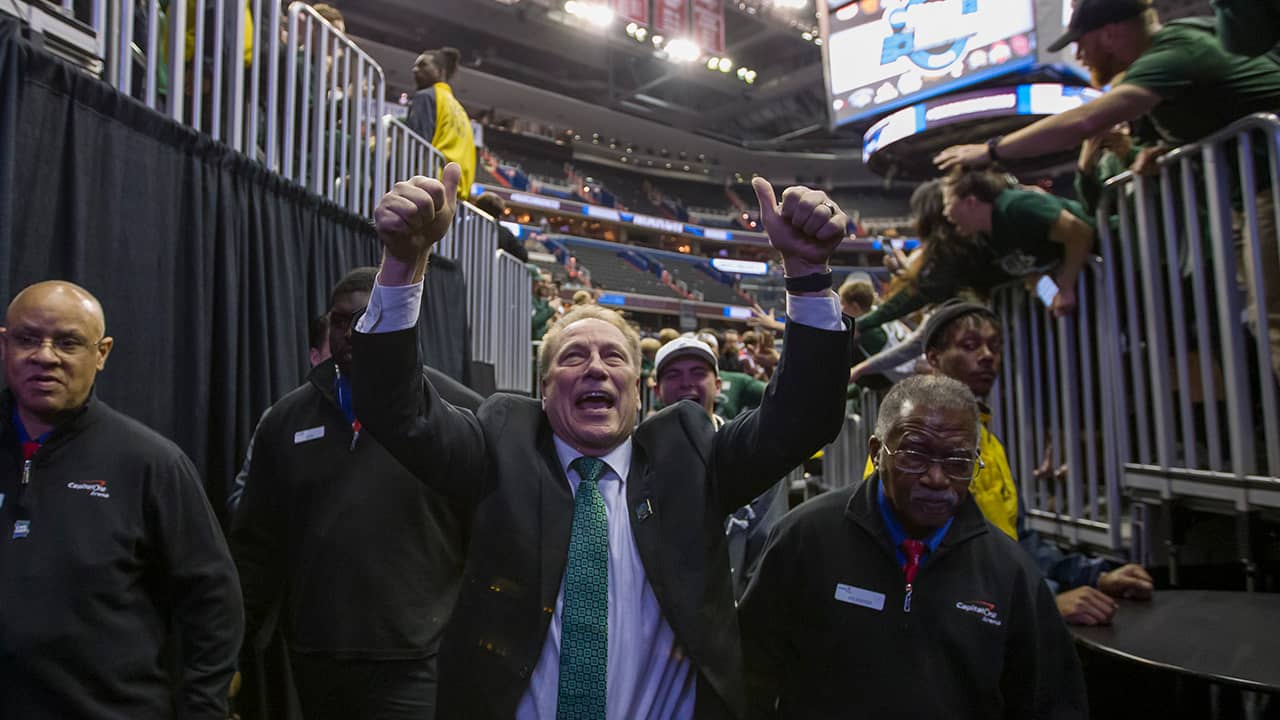 Tom Izzo drew up the perfect play at the perfect moment, sending Michigan State past mighty Duke for a spot in the Final Four.
The trip is always emotional, but Izzo has done it before. This will be his eighth Final Four and a chance for a second national championship.
With the game on the line, Izzo drew up a play to free Kenny Goins for a wide-open 3-pointer. The senior guard knocked it down with 34 seconds left, the Spartans clamped down on defense and Cassius Winston broke free to dribble out the clock, practically running all the way to Minneapolis with the ball.
The other three Final Four coaches all will be the new kids at the dance.
Chris Beard’s nomadic journey struck a vein of gold in his 12th coaching stop at Texas Tech, with a gritty pack of ball-hawking players grasping the program’s first Final Four. Their opponent next Saturday in Minneapolis: Izzo’s Spartans.
Virginia’s Tony Bennett finally got over the hump in his 10th season with the Cavaliers, putting them in position for a different kind of history after last year’s historic first-round flameout against No. 16 UMBC.

And Bruce Pearl found some gems at Auburn after an acrimonious split with Tennessee, guiding the Tigers to Minneapolis where they’ll face Virginia despite the cloud of a federal investigation hanging over the program. Beard was at Division II Angelo State just four years ago, the ABA’s South Carolina Warriors three years before that. He took over a middling Texas Tech program in 2016 and turned it around by getting non-five-star players to buy into his defensive philosophies.
Texas Tech reached the Elite Eight for the first time in Beard’s second season a year ago, but not much was expected from the Red Raiders this season after losing five of their top six scorers.
Picked to finish seventh in the preseason poll, Texas Tech was one of college basketball’s biggest surprises, sharing the Big 12 regular-season championship with Kansas State to end Kansas’ 14-year reign. After a hiccup against West Virginia in the conference tournament, Texas Tech (30-6) and the nation’s most efficient defense shut down four straight NCAA Tournament opponents to reach the program’s first Final Four.
“It is real. That defense is real,” Gonzaga coach Mark Few said after the Red Raiders bounced the Zags from the Elite Eight.
So is Virginia’s.
Using the same principles his father, Dick, ran at Wisconsin and Washington State, Cavaliers coach Tony Bennett runs a “pack line” defense that forces teams to the perimeter. As the name suggests, Virginia packs its defense into the paint, clogging driving lanes, help defenders already in place to fill the gaps in the defense.
Bennett needed a few years to cement the foundation of his defensive principles, but once he did, Virginia became one of the nation’s top defenses.

The Greatest Coaching Job of His Career

The Cavaliers led the nation in scoring at 55 points per game this season and are fifth in KenPom’s defensive efficiency. Virginia (33-3) shut down its first three opponents and survived an offensive onslaught by Purdue’s Carsen Edwards to earn its first Final Four since 1984.
Bounced in a historic loss a year ago, the Cavaliers finally got Bennett the one piece missing from his resume.