JERUSALEM — An unofficial cease-fire appeared to be holding Wednesday between Israel and Gaza’s Hamas rulers despite limited exchanges of fire.

Violence could erupt again this weekend, when large-scale protests are expected along the Israel-Gaza frontier marking the anniversary of weekly rallies in which nearly 200 Palestinians have been killed by Israeli fire.

Schools reopened in southern Israel and residents resumed their daily routines after a few overnight rocket attacks from Gaza that set off air-raid sirens, breaking a daylong lull. The Israeli military struck back against additional Hamas targets but there were no reports of casualties on either side.

In the West Bank, meanwhile, a teenage Palestinian medic was shot dead during clashes between Israeli troops and protesters.

Both Israel and Hamas appeared to have stepped back from the brink of a full-fledged confrontation. But violence could erupt again this weekend, when large-scale protests are expected along the Israel-Gaza frontier marking the anniversary of weekly rallies in which nearly 200 Palestinians have been killed by Israeli fire.

The Israeli military bolstered its forces along the Gaza frontier in advance.

Hamas’ supreme leader made his first public appearance since the cross-border violence with Israel began earlier this week.

Israel and Hamas Have Fought Three Wars and Dozens of Skirmishes

Ismail Haniyeh visited the rubble of his Gaza City office, which was destroyed in an Israeli airstrike on Monday, and told reporters that “the Israeli occupation got the message.”

He also urged Gazans to participate in mass protests along the Israel-Gaza frontier on Saturday marking the first anniversary of a movement aimed at ending an Israeli-Egyptian blockade.

Israel and Hamas have fought three wars and dozens of skirmishes since the Islamic militant group seized control of Gaza in 2007. The latest round was triggered by a Gaza rocket fired early Monday that slammed into a house in central Israel and wounded seven people.

Prime Minister Benjamin Netanyahu rushed back to Israel from a trip to Washington to deal with the crisis. Israel struck dozens of targets in Gaza, including the office of Hamas leader Ismail Haniyeh. Gaza’s Health Ministry said seven Palestinians were wounded in the airstrikes.

Netanyahu faced the difficult task of delivering a tough blow to Hamas while avoiding protracted fighting that could work against him in next month’s national elections. He has come under heavy criticism from both allies and opponents for what they say has been a failure to contain Gaza militants.

He has conducted indirect cease-fire talks through Egyptian mediators in recent months, and even allowed the delivery of millions of dollars of Qatari aid to Hamas to ease harsh conditions in the territory, which has been under an Israeli-Egyptian blockade since Hamas seized power in 2007. 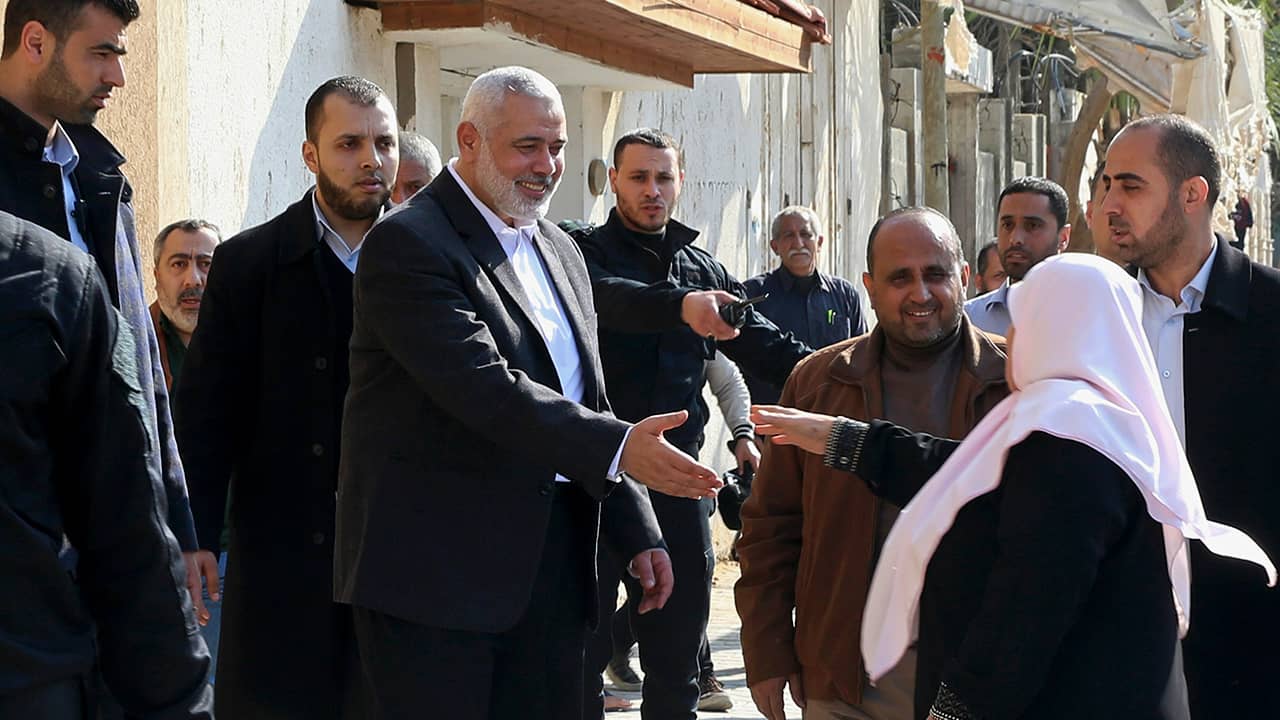 Hamas’ supreme leader Ismail Haniyeh shakes Hans with a woman at the site of a destroyed building, in Gaza City, Wednesday, March 27, 2019. Haniyeh made his first public appearance since a new round of cross-border violence with Israel this week. On Wednesday he visited the rubble of his Gaza City office, which was destroyed in an Israeli airstrike. (AP Photo/Adel Hana)

Hamas has recently faced rare demonstrations over its mismanagement of an economic crisis that has left Gaza with an unemployment rate above 50 percent. Hundreds of Gazans took part in the protests last week, and Hamas responded with a violent crackdown, beating and arresting dozens of demonstrators.

Israeli troops killed four Palestinians last week, including one said to be unarmed. That followed a weekend stabbing and shooting attack in which a Palestinian killed two Israelis near a West Bank settlement.

The fighting in Gaza comes amid an uptick in violence in the Israeli-occupied West Bank.

The Palestinian Health Ministry said Israeli soldiers shot dead 18-year-old paramedic Sajed Mizher after stones were thrown at them during an arrest raid in the Dheisheh refugee camp near Bethlehem early Wednesday. It said two others were wounded in the clashes.

Fellow paramedic Abed Ghareeb said they had rushed to help a wounded protester when Mizher, who was wearing a paramedic vest, was shot by a sniper.

The Israeli military said it was looking into the report. It often carries out pre-dawn arrest raids.

Israeli troops killed four Palestinians last week, including one said to be unarmed. That followed a weekend stabbing and shooting attack in which a Palestinian killed two Israelis near a West Bank settlement.

Since 2015, Palestinians have killed over 50 Israelis in stabbings, shootings and car-ramming attacks in the West Bank. Israeli forces have killed more than 260 Palestinians in that same period. Israel says most of the Palestinians killed were attackers, but clashes between protesters and soldiers have also turned deadly.