A Pittsburgh synagogue that was the victim of a shooting massacre killing 11 worshippers last October is raising funds to support New Zealand’s Muslim community.

An Australian white supremacist is charged with killing 50 people at two mosques in Christchurch, New Zealand, during Friday prayers.

“We’re unfortunately part of a club that nobody wants to be part of, and we wanted to reach out to New Zealand in the same way everyone reached out to us.” — Tree of Life congregation president Sam Schachner

As of early Monday afternoon, the GoFundMe campaign undertaken by the Tree of Life congregation in Pittsburgh had raised more than $14,000 of its $100,000 goal.

“To the families going through the most difficult moments in your lives: the Jewish community of Pittsburgh is with you. Our hearts are with you. We hold you in our prayers,” Tree of Life said on the GoFundMe campaign page.

In a story published by the Pittsburgh Post-Gazette, Tree of Life congregation president Sam Schachner said, “We’re unfortunately part of a club that nobody wants to be part of, and we wanted to reach out to New Zealand in the same way everyone reached out to us.”

The synagogue said it recalls “with love the immediate, overwhelming support” it received from Muslims in Pittsburgh.

The Jewish Federation of Greater Pittsburgh is also raising funds at this link.

“Unfortunately we are all too familiar with the devastating effect a mass shooting has on a faith community,” said Meryl Ainsman, chair of the board of the Jewish Federation of Greater Pittsburgh. “We are filled with grief over this senseless act of hate. May those who were injured heal quickly and fully, and may the memories of the victims forever be a blessing.”

A gunman who expressed hatred of Jews was charged in the Oct. 27 Tree of Life synagogue attack. 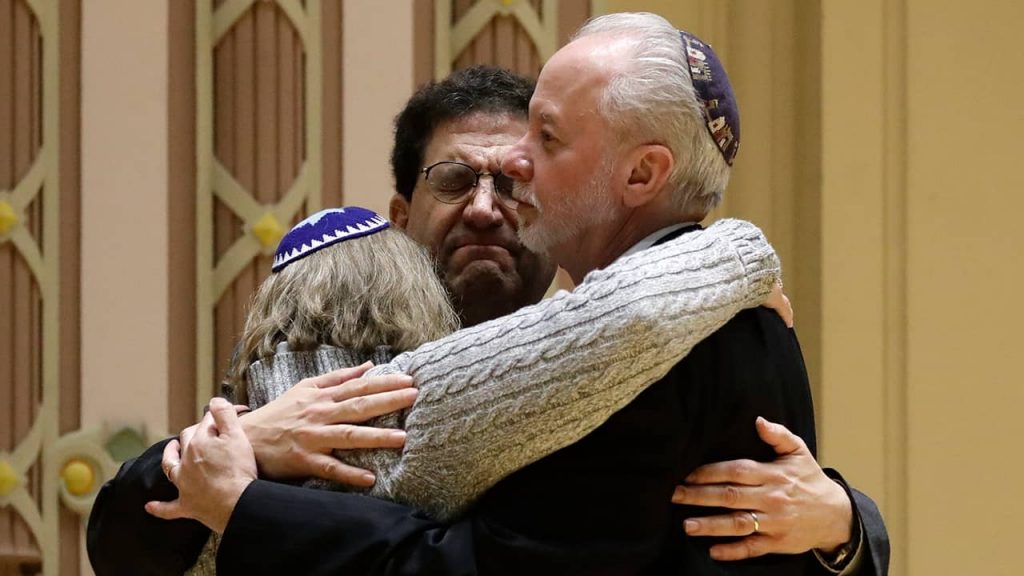 In this Oct. 28, 2018, photo, Rabbi Jeffrey Myers, right, of Tree of Life hugs Rabbi Cheryl Klein, left, of Dor Hadash Congregation and Rabbi Jonathan Perlman during a community gathering held in the aftermath of a deadly shooting at the Tree of Life Synagogue in Pittsburgh. As the Jewish community grieved, Myers took a leading role during public memorials and presided over seven funerals in the space of less than a week. (AP File)