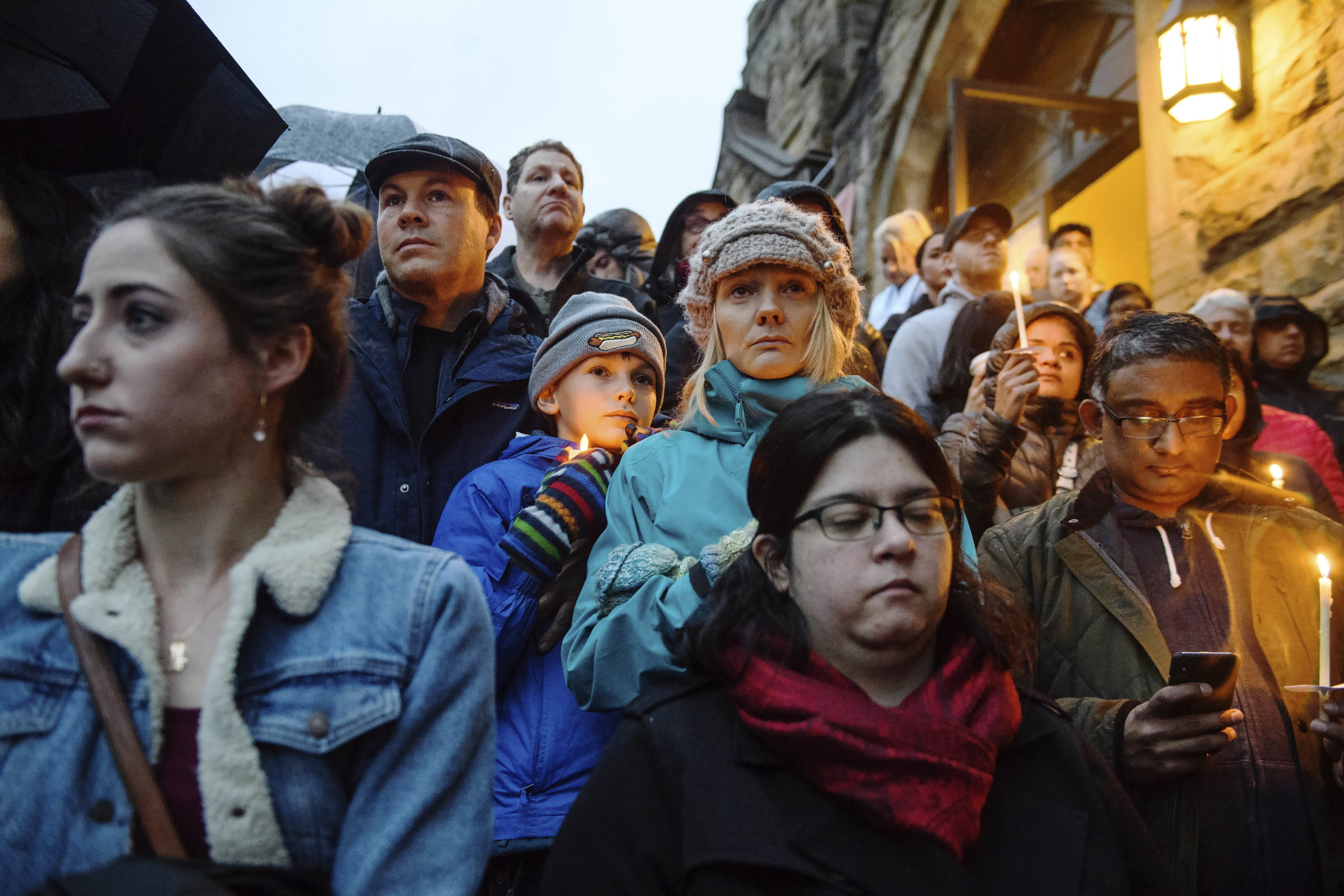 PITTSBURGH — The suspect in the mass shooting at a Pittsburgh synagogue expressed hatred of Jews during the rampage and told officers afterward that Jews were committing genocide and that he wanted them all to die, according to charging documents made public Sunday.
Robert Gregory Bowers killed eight men and three women inside the Tree of Life Synagogue on Saturday during worship services before a tactical police team tracked him down and shot him, authorities said in state and federal affidavits, which contained some unreported details on the shooting and the police response.


“I just want to kill Jews.” — Synagogue shooting suspect Robert Gregory Bowers
“I just want to kill Jews,” Bowers told an officer, according to one of the documents.
Officials released the names of all 11 victims during a news conference Sunday, all of them middle-aged or elderly. The victims included a pair of brothers and a husband and wife. The oldest was 97.

Mayor Bill Peduto called it the “darkest day of Pittsburgh’s history.”
Calls began coming in to 911 from the synagogue just before 10 a.m. Saturday. Bowers, 46, shot one of the first two officers to respond in the hand, and the other was wounded by “shrapnel and broken glass,” according to court documents.
A tactical team found Bowers on the third floor, where he shot two officers multiple times, an affidavit said.
One of the wounded officers was treated and released, and a second was expected to be released Sunday. The other two officers were expected to stay in the hospital, and one of them, a 40-year-old man, remained in critical condition Sunday. 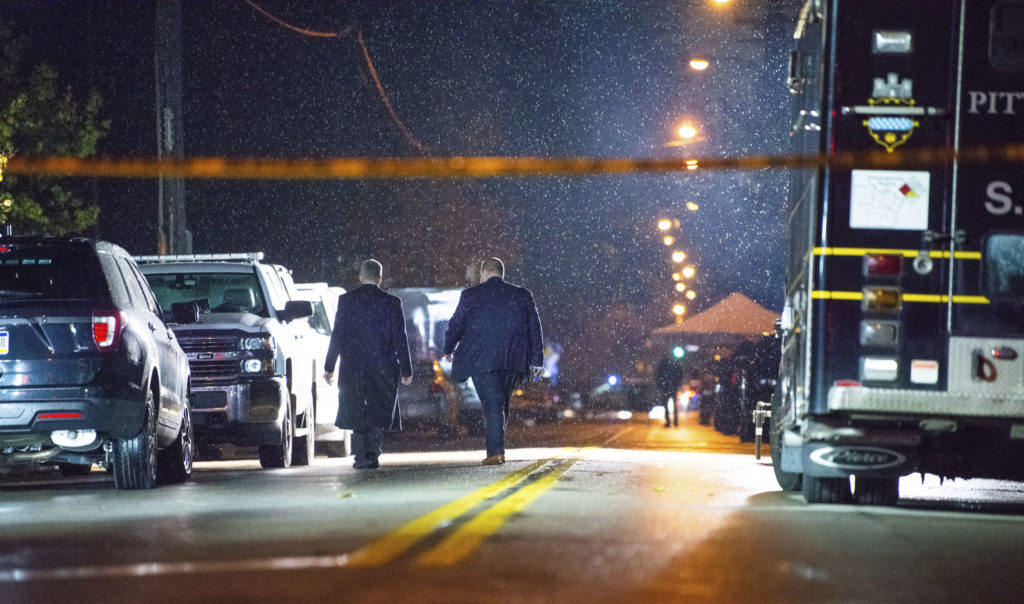 The FBI investigates in the rain after an active shooter situation at the Tree of Life Congregation on Saturday, Oct. 27, 2018, in the Squirrel Hill section of Pittsburgh. A gunman opened fire at the synagogue, killing multiple people and injuring others in one of the deadliest attacks on Jews in U.S. history. (Andrew Stein/Pittsburgh Post-Gazette via AP)

Two other people in the synagogue were wounded by Bowers. A 61-year-old woman was listed in stable condition, and a 70-year-old man was in critical condition, according to the University of Pittsburgh Medical Center.

Bowers, who was armed with an AR-15 rifle and three handguns and used all four weapons in the attack, told an officer while he was being treated for his injuries “that he wanted all Jews to die and also that they (Jews) were committing genocide to his people,” a Pittsburgh police affidavit said.
Bowers was charged with 11 state counts of criminal homicide, six counts of aggravated assault and 13 counts of ethnic intimidation in what the leader of the Anti-Defamation League called the deadliest attack on Jews in U.S. history.
Bowers was also charged in a 29-count federal criminal complaint that included counts of obstructing the free exercise of religious beliefs resulting in death — a federal hate crime — and using a firearm to commit murder. U.S. Attorney General Jeff Sessions said the charges “could lead to the death penalty.”

Bowers, who underwent surgery and remained hospitalized, is scheduled for a court appearance Monday. It wasn’t clear whether he had an attorney to speak on his behalf.

Trump: Outcome Might Have Been Different With Armed Guard Present

The nation’s latest mass shooting drew condemnation and expressions of sympathy from politicians and religious leaders of all stripes. With the midterm election just over a week away, it also reignited a longstanding and bitter debate over guns.
Pope Francis led prayers for Pittsburgh on Sunday in St. Peter’s Square.
“In reality, all of us are wounded by this inhuman act of violence,” he said. He prayed for God “to help us to extinguish the flames of hatred that develop in our societies, reinforcing the sense of humanity, respect for life and civil and moral values.”
German Chancellor Angela Merkel’s spokesman quoted Merkel on Twitter as offering her condolences and saying that “all of us must confront anti-Semitism with determination — everywhere.”
Trump on Saturday said the outcome might have been different if the synagogue “had some kind of protection” from an armed guard, while Pennsylvania’s Democratic Gov. Tom Wolf, up for re-election, noted that once again “dangerous weapons are putting our citizens in harm’s way.”
Calling the shooting an “evil anti-Semitic attack,” Trump ordered flags at federal buildings throughout the U.S. to be flown at half-staff in respect for the victims. He said he planned to travel to Pittsburgh but offered no details.

In the city, thousands gathered for a vigil Saturday night. Some blamed the slaughter on the nation’s political climate.
“When you spew hate speech, people act on it. Very simple. And this is the result. A lot of people dead. Senselessly,” said Stephen Cohen, co-president of New Light Congregation, which rents space at Tree of Life.
Little was known about Bowers, who had no apparent criminal record but who is believed to have expressed virulently anti-Semitic views on social media. Authorities said it appears he acted alone.
The Jewish community is “an important part of the cultural and social identity of Pittsburgh, and so this was an attack upon our neighbors and upon our friends,” Scott Brady, the chief federal prosecutor in western Pennsylvania, said. 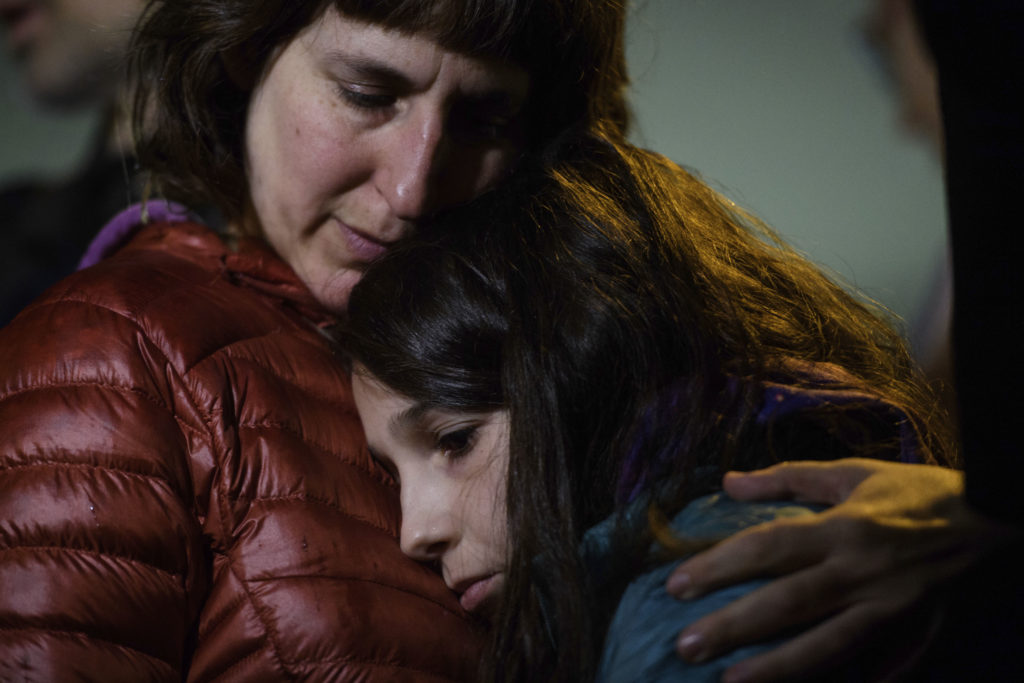 Rachel Kranson, left, holds her daughter, Sasha Kranson, 12, during a vigil after an active shooter fatally shot multiple people at Tree of Life Congregation synagogue on Saturday, Oct. 27, 2018, in their neighborhood of Squirrel Hill in Pittsburgh. (Stephanie Strasburg/Pittsburgh Post-Gazette via AP)

The gunman targeted a building that housed three separate congregations, all of which were conducting Sabbath services when the attack began just before 10 a.m. in the tree-lined residential neighborhood of Squirrel Hill, about 10 minutes from downtown Pittsburgh and the hub of the city’s Jewish community.
During the week, anyone who wanted to get inside Tree of Life synagogue had to ring the doorbell and be granted entry by staff because the front door was kept locked. Not so on Saturday — the Jewish Sabbath — when the building was open for worship.
Michael Eisenberg, the immediate past president of the Tree of Life, said synagogue officials had not gotten any threats that he knew of before the shooting. But security was a concern, he said, and the synagogue had started working to improve it.
Related Topics:Jewsmass shootingPittsburghRobert Bowerssuspectsynagogue
Up Next