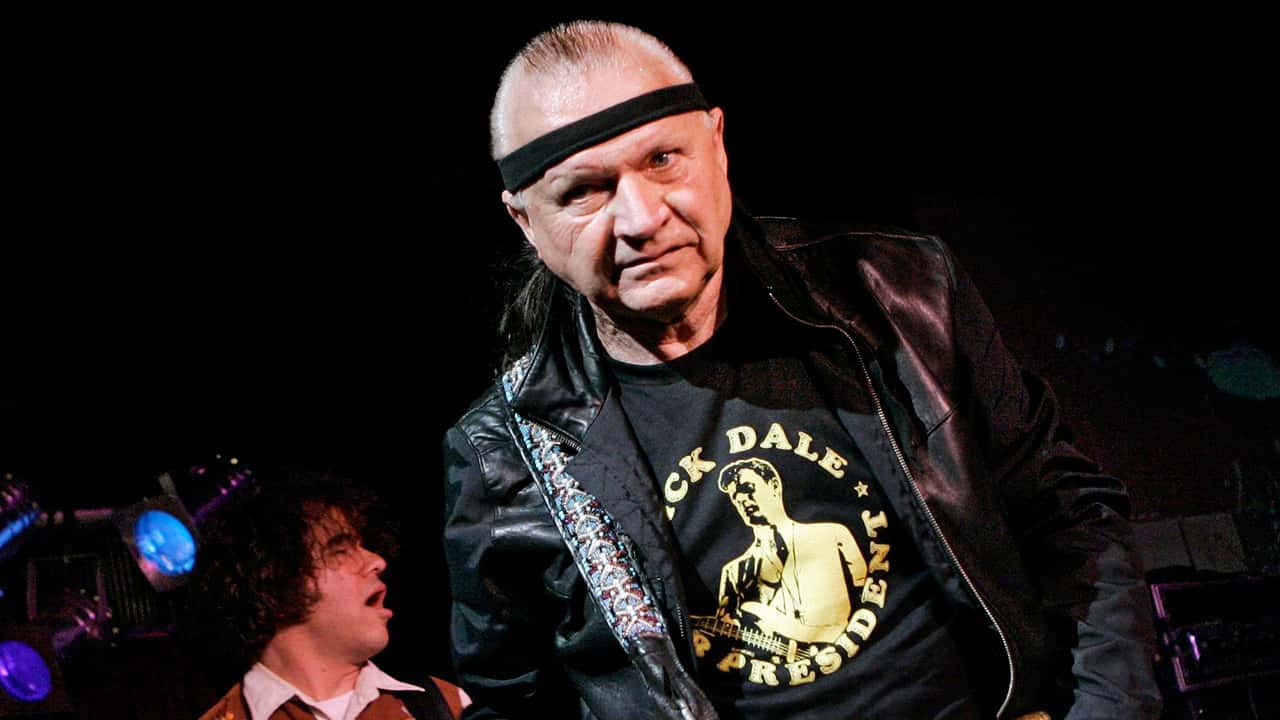 LOS ANGELES — Dick Dale, whose pounding, blaringly loud power-chord instrumentals on songs like “Miserlou” and “Let’s Go Trippin'” earned him the title King of the Surf Guitar, has died at age 81.

Dale liked to say it was he and not the Beach Boys who invented surf music — and some critics have said he was right.

An avid surfer, Dale started building a devoted Los Angeles fan base in the late 1950s with repeated appearances at Newport Beach’s old Rendezvous Ballroom. He played “Miserlou,” ”The Wedge,” ”Night Rider” and other compositions at wall-rattling volume on a custom-made Fender Stratocaster guitar.

“Miserlou,” which would become his signature song, had been adapted from a Middle Eastern folk tune Dale heard as a child and later transformed into a thundering surf-rock instrumental.

Dale said he developed his musical style when he sought to merge the sounds of the crashing ocean waves he heard while surfing with melodies inspired by the rockabilly music he loved.

He pounded rather than plucked the strings of his guitar in a style he said he borrowed from an early musical hero, the great jazz drummer Gene Krupa.

His Musical Influence Was Profound

“Dale pioneered a musical genre that Beach Boy Brian Wilson and others would later bring to fruition,” Rolling Stone magazine said in its “Encyclopedia of Rock & Roll” adding “Let’s Go Trippin'” was released in 1961, two months ahead of the Beach Boys’ first hit, “Surfin.'”

The magazine called Dale’s song “the harbinger of the ’60s surf music craze.”

“Dale pioneered a musical genre that Beach Boy Brian Wilson and others would later bring to fruition.” — Rolling Stone magazine said in its “Encyclopedia of Rock & Roll”

Although popular around Southern California, Dale might have remained just a cult figure if surfing had not exploded in worldwide popularity during his peak creative years.

When the first of a series of “Beach Party” movies made to cash in on the phenomenon was released in 1963, it included Dick Dale and the Del-Tones performing “Secret Surfing Spot” as teen heartthrob Annette Funicello danced on the beach.

Dale had released his first album, “Surfer’s Choice,” a year earlier. He followed it with four more over the next two years while appearing in several “Beach Party” sequels and other surfer movies.

His star dimmed after the Beatles led music’s British invasion onto the pop charts in 1964 and his record label dropped him. His career also was sidelined by a battle with cancer in the 1960s and a serious foot infection in the 1970s that was the result of a surfing injury.

His musical influence was profound and included guitar virtuosos Jimi Hendrix and Stevie Ray Vaughan and movie director Quentin Tarantino, who selected Dale’s “Miserlou,” as the theme song of his 1994 film “Pulp Fiction.” That helped pull the guitarist back into the pop-culture spotlight.

Dale himself had begun to launch a comeback with the 1987 film “Back to the Beach,” which reunited Funicello and her co-star Frankie Avalon as a middle-aged couple returning to their old surfing haunts. He teamed up with Vaughan to record the classic surf instrumental “Pipeline” for that film, earning the pair a Grammy nomination.

As He Began to Become Well Known, Began Calling Himself ‘Dick Dale’

In 1993 he released “Tribal Thunder,” his first album of all new material in nearly 30 years. He followed it with “Unknown Territory” the following year.

Dale continued to tour into his 80s, in part he said to pay the medical bills that advancing age was saddling him with. Having beaten cancer in the 1960s, he suffered a serious recurrence in 2015.

“I became Leo’s personal guinea pig. Anything that came out of the Fender company, I played.” — Dick Dale

Born Richard Anthony Monsour in Boston on May 4, 1937, Dale moved to Los Angeles with his family in 1954, where he immediately fell in love with surfing and the electric guitar.

As a child, he listened to Lebanese and Polish folk tunes played by his parents. Eventually he graduated to big band, swing, country and rockabilly.

Self-taught on guitar, the left-handed Dale couldn’t afford a custom-made model, so early on he played a standard right-hand guitar upside down and backward. That ended after a meeting with legendary guitar builder Leo Fender, who offered to make Dale his own left-handed model if he’d test a line of guitars and amplifiers Fender was developing.

“I became Leo’s personal guinea pig,” Dale told The Associated Press in 1997. “Anything that came out of the Fender company, I played.”

He played so loudly that he blew up one amplifier after another until a frustrated Fender built him a “Dick Dale Dual Showman” doubled-sized amp. It was a model that would become popular with aspiring Los Angeles guitarists.

As he began to become well known, he began calling himself Dick Dale, explaining years later that a radio disc jockey had suggested it was a better name for a rock star than Richard Monsour.

His surfer buddies had already nicknamed him King of the Surf Guitar, a title he said he initially resisted, fearing it would limit his audience. When the spirit of surfing caught on everywhere, however, he came to embrace the crown.

Dale is survived by his wife, Lana, and a son, James, a drummer who sometimes toured with his father.