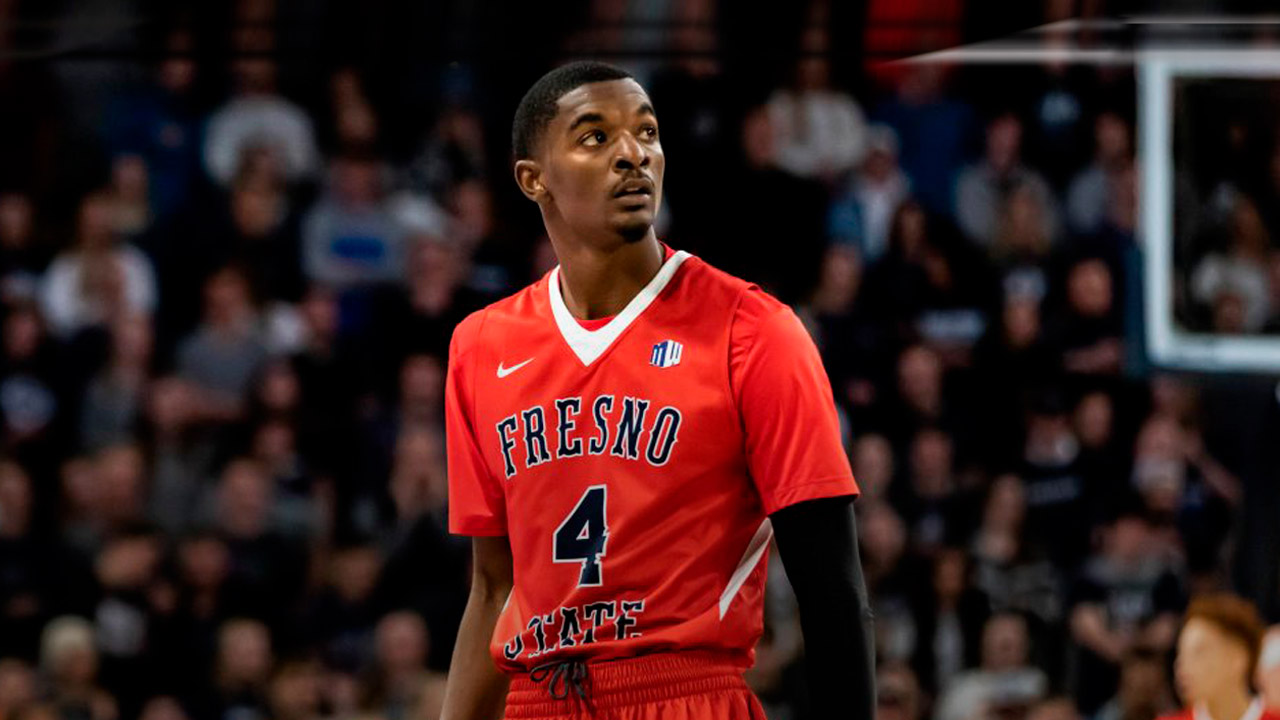 Fresno State guard Noah Blackwell pretty well summed up the Bulldogs’ 78-77 victory Wednesday night over Utah State in Logan.
Said Blackwell of teammate Braxton Huggins: “That dude Braxton is something else. He’s a different animal. He’s just built for moments like that and I’m just happy to have him on my team.”
Huggins, who had been in something of a shooting funk entering the Mountain West Conference men’s basketball game, scored a career-high 33 points, including 8 of 13 from behind the 3-point arc.
And, with five seconds remaining, the senior from Bakersfield broke right, then cut left to get defender Sam Merrill on the wrong foot. The straight-away trey went through the net to win it for the Bulldogs.

By the way, until Huggins’ heroics, the Bulldogs had never led in the game.
Merrill launched a 3 as time was winding down, but it was partially blocked. Aggies teammate Quinn Taylor grabbed the rebound while going out of bounds but missed his putback — resulting in Utah State’s first homecourt loss of the season.
All in all, it was quite a night for the Bulldogs, who return to the Save Mart Center on Saturday night for their biggest game of the still young season: a showdown with Nevada, which is ranked No. 10 in the nation and has designs on reaching the Final Four.

“When it got to Braxton he had a choice to run another action or play one-one-one,” explained Bulldogs coach Justin Hutson. “A guy who had been shooting the ball that well — he’s a really good one-on-one player, he’s the best one-on-one player we have — he just created some space and knocked it down.”
And here’s what Huggins had to say:
“We knew we didn’t have a timeout and we knew we needed a three. We just tried looking for the best shot and the ball ended up in my hands. I had a pretty good night going, a pretty good second half and the guys gave me trust to shoot the ball. I said, ‘Yeah, I’m going to try to make a play to finish the game.’ ”
Blackwell added 13 points and six assists, and backcourt mate Deshon Taylor contributed 11 points and 11 assists as the Bulldogs improved to 3-0 in conference play and 12-3 overall.

Rebounding From a Shaky First Half

Utah State started hot from the opening tip-off with a 12-4 run and led by as many as 12 shortly before halftime when the Aggies capped a 9-0 run with a Quinn Taylor lay-up for a 35-23 lead.
But Deshon Taylor made a deep 3-pointer just before the first-half buzzer, and the Bulldogs carried that momentum into the final 20 minutes.
“It was a good game, but obviously a devastating loss,” Utah State guard Brock Miller told the Deseret News. “We led the whole game until the very end. They made some tough plays. Credit to Fresno State, they came out, especially in the second half, and really made some tough shots.”
Merrill scored 16 points and but was held to 3 of 10 from the floor. He was 9 of 11 at the foul line. Neemias Queta also scored 16 on 6-of-6 shooting and grabbed nine rebounds for Utah State (11-5, 1-2).
The Bulldogs made 15 3-pointers — half of their made field goals (30 of 66).

The floodgates opened again for Nevada (15-1, 2-1) on Wednesday night.
After its first loss of the season Saturday, 85-58 at New Mexico, the Wolf Pack returned to form in its 92-53 homecourt win against San Jose State.
“These guys have a green light (from beyond the arc),” Nevada coach Eric Musselman said. “Without a green light, we don’t open the game like we did tonight. We feel like the floodgates are coming, it’s just a matter of when. We’ve played 16 games and one night, the floodgates never came. The other 15 nights, at some point in the game, the floodgates came, and one time it didn’t.”
Caleb Martin led Nevada’s push with 21 of his 23 points in the second half and Jordan Caroline added 19 points. Trey Porter grabbed a season-high 13 rebounds.
Brae Ivey led San Jose State (3-11, 0-2) with 10 points.
(Associated Press contributed to this story.)