Sierra Snowpack Checks in at 67% of Normal 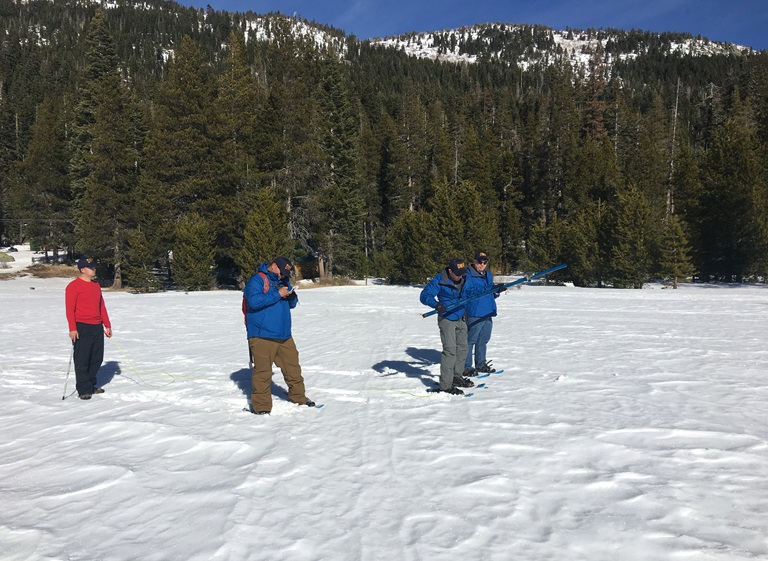 PHILLIPS STATION — Winter storms have coated California’s Sierra Nevada mountains in snow, but the drought-prone state is still off to another dryer-than-normal start to the crucial wet season.


“About two-thirds of California’s annual rainfall occurs December through March. Total precipitation so far this water year, which began October 1, has been below average.” — DWR climatologist Michael Anderson
California water managers said Thursday the Sierra snowpack is only 67 percent of normal in this winter’s first manual measurement.
“The last few years have shown how variable California’s climate truly is and what a profound impact climate change has on our water resources,” said state Department of Water Resources Director Karla Nemeth.
“California’s significant weather variability means we can go from historic drought to record rainfall, with nothing in between. Climate change will continue to exacerbate the extremes, creating additional challenges for maintaining water supply reliability and the need for innovative solutions.”

Winter snow in the Sierra provides drinking water for much of California as it melts in the spring and summer and flows into reservoirs for storage.
Precipitation has bounced up and down as the state continues to recover from a devastating drought that led to tight water restrictions for residents and farmers and contributed to severe wildfires.
Gov. Jerry Brown declared a formal end to a three-year drought emergency for most of the state in 2017, but he said that water conservation efforts must continue.
“About two-thirds of California’s annual rainfall occurs December through March. Total precipitation so far this water year, which began October 1, has been below average,” said DWR climatologist Michael Anderson. “We still have three wet season months ahead of us, so there’s time for the snowpack to build and improve before it begins to melt, which usually starts happening around April 1.”

DWR has conducted manual snow surveys at Phillips Station since 1964, recording both depth and snow water equivalent. Snow water equivalent is the depth of water that theoretically would result if the entire snowpack melted instantaneously. That measurement allows for a more accurate forecast of spring runoff.
DWR conducts five snow surveys each winter — near the first of January, February, March, April, and May — at Phillips Station in the Sierra Nevada just off Highway 50 near Sierra-at-Tahoe. The Phillips snow course is one of hundreds that will be surveyed manually throughout the winter. Manual measurements augment the electronic readings from about 100 snow pillows in the Sierra Nevada that provide a current snapshot of the water content in the snowpack.
(GV Wire contributed to this report.)

China Lands Spacecraft on ‘Dark’ Side of Moon in World First