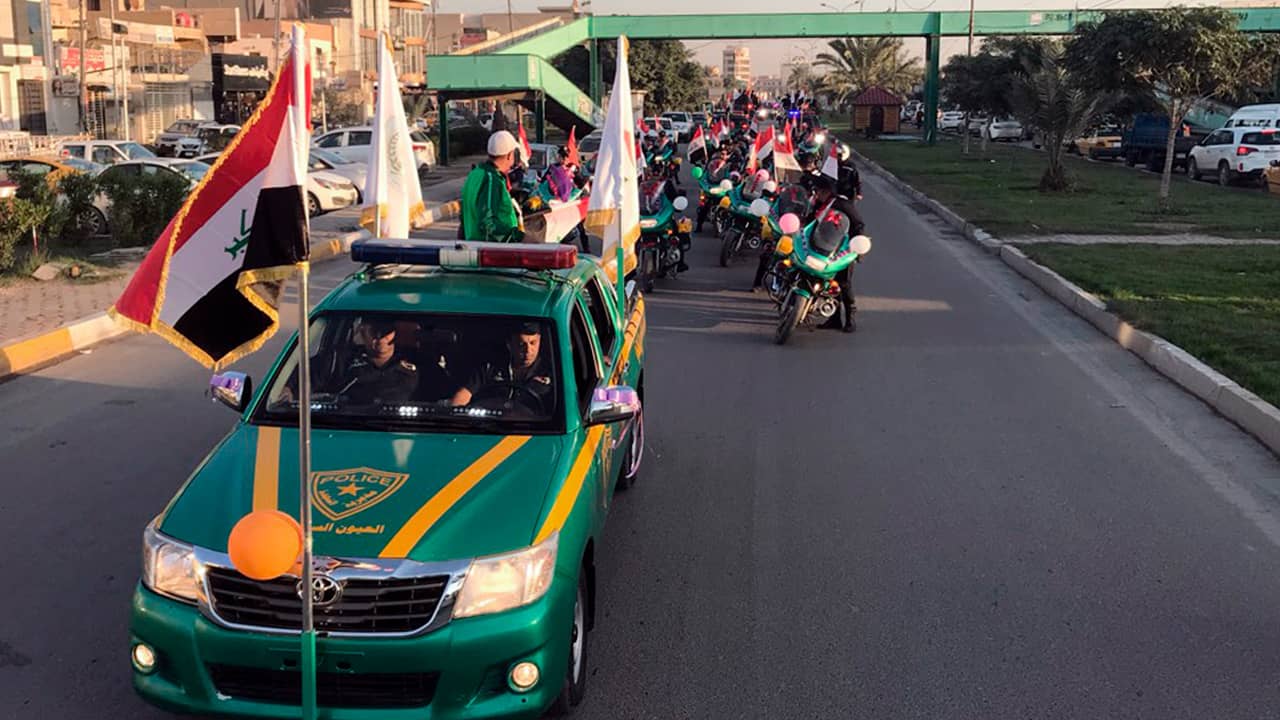 BAGHDAD — Iraq began removing cement walls from areas surrounding the capital’s most fortified enclave Monday, opening parts of the so-called Green Zone to traffic in a symbolic move coinciding with nationwide celebrations marking the anniversary of the country’s costly victory over the Islamic State group.
The partial reopening of parts of the high security area is meant to portray increased confidence in the country’s overall security situation and is also being billed as an act of transparency following protests against corruption and poor public services.
The enclave on the west bank of the Tigris became home to foreign embassies and key government buildings after the U.S.-led invasion of 2003 and has since then been surrounded by blast walls and barbed wire, inaccessible to most Iraqis.
The partial reopening of some side streets — initially just for five hours a day — has been repeatedly delayed and then timed to coincide with the one year anniversary of Iraq’s victory over IS. The group has lost virtually all the territory it once held but still carries out sporadic attacks to hang on to its last enclave in Syria near the Iraqi border.

Thousands of People Killed and Hundreds of Thousands Displaced

The government declared victory last December after a grueling three-year war in which tens of thousands of people were killed and hundreds of thousands displaced. Entire towns and neighborhoods were reduced to rubble in the fighting.

More than 1.8 million Iraqis remain displaced across the country, and a staggering 8 million require some form of humanitarian aid, according to the Norwegian Refugee Council. Those with suspected links to IS have been rejected by their communities, while thousands of children fathered by IS militants — including those born to enslaved Yazidi women — are still unrecognized by the state.
Nearly two-thirds of displaced people say they are unwilling or unable to return home in the next year, with more than half saying their homes were damaged or destroyed, according to the aid group.
“If this is what ‘victory’ looks like, then there is little to celebrate for millions of Iraqis still haunted by the crimes of the IS and the long war to eliminate it,” said Norwegian Refugee Council Secretary General Jan Egeland.
“They have largely been forgotten by their own government and the international community.”
But the government was in a celebratory mood.

Coming Together for a Better Future

Addressing a group of Iraqi military officers, Prime Minister Adel Abdul-Mahdi said it was a “proud day for all of us when our brave country defeated the enemies of life, dignity, freedom and peace.”

Popular songs praising the paramilitaries, also known as the Popular Mobilization Forces, blared out from his small cosmetic accessories shop in a narrow alley in Baghdad’s Shiite-dominated Karrada area, today adorned with rows of Iraqi flags. He said he planned to put out a large tray of free sweets for customers later in the day.
The Islamic State group, which traces its roots back to the insurgency that followed the 2003 U.S.-led invasion, swept into Iraq from neighboring Syria in the summer of 2014. It carved out a self-styled caliphate across a third of both countries, imposing a harsh form of Islamic rule and massacring its opponents. The group abducted thousands of women and girls from the Yazidi religious minority and forced them into sexual slavery.
Iraqi forces aided by a U.S.-led coalition eventually drove the group from all the territory it once held in Iraq, including in the climactic battle for Mosul, the country’s second-largest city.
IS is still currently fighting to hold on to a small pocket of territory in Syria, near the Iraqi border.