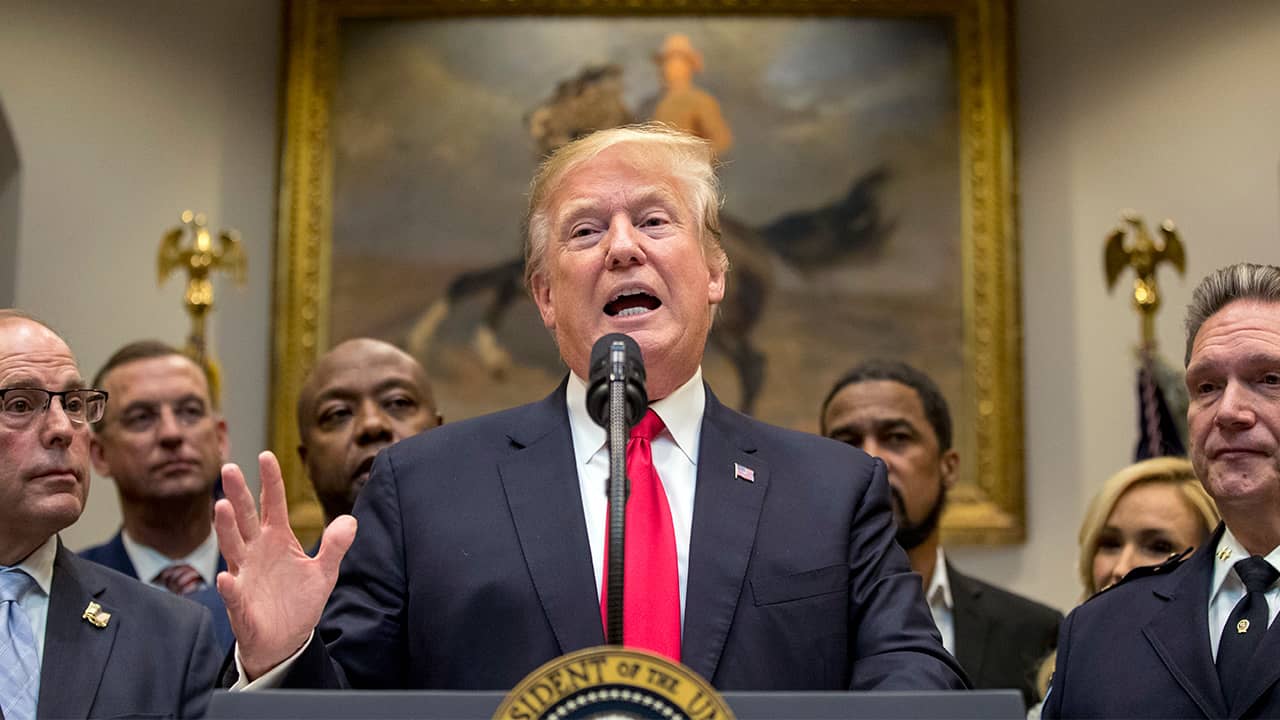 WASHINGTON — President Donald Trump is supporting the first major rewrite of the nation’s criminal justice sentencing laws in a generation, but it remains to be seen whether the proposal can pass Congress.

Trump said earlier this month that the bill “will make our communities safer and give former inmates a second chance at life after they have served their time.” Trump hailed the deal as proof that “true bipartisanship is possible” — though no Democrats attended the White House announcement.

“I’ll be waiting with a pen.” — President Donald Trump

Senators have reached an agreement on bipartisan legislation that would boost rehabilitation efforts for federal prisoners and give judges more discretion when sentencing nonviolent offenders, particularly for drug offenses. The House approved a prison reform bill in May, but the proposed Senate package makes additional changes and adds the sentencing component. That means the House would need to revote on anything the Senate passes.

Criminal justice reform has been a priority of Trump’s son-in-law, White House senior adviser Jared Kushner, who has been working on the issue for months. Trump pushed for swift passage of the legislation, potentially during the lame-duck session of Congress. 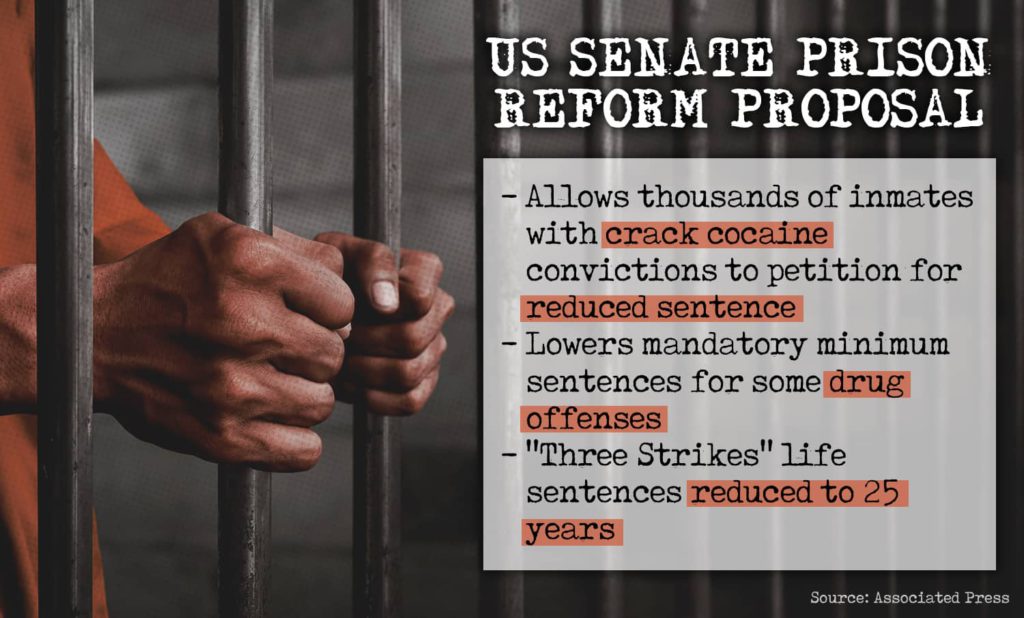 McConnell Says He Has a Lot on His Plate

But members still haven’t seen the details, and time is running short.

Senate Majority Leader Mitch McConnell, R-Ky. has told reporters that GOP leaders would do a whip count to gauge the bill’s support once they have a final proposal in hand.

Still, he noted the Senate has other things it needs to accomplish in the final weeks of the year, including funding the government and passing a farm bill. He said Republicans would have to see how the criminal justice bill “stacks up against our other priorities” once a final agreement is reached.

House Speaker Paul Ryan, R-Wis., called Trump’s announcement “an encouraging sign that we can achieve substantive reforms to our criminal justice system in this Congress.”

“Redemption is at the heart of the American Idea, and that’s what this is about,” he said.

A White House official, speaking on condition of anonymity to discuss internal thinking, said they hoped McConnell would hold a whip count after the Thanksgiving break. They also argued Trump’s support would move lawmakers to back the compromise and that more would sign on once legislative text is released. 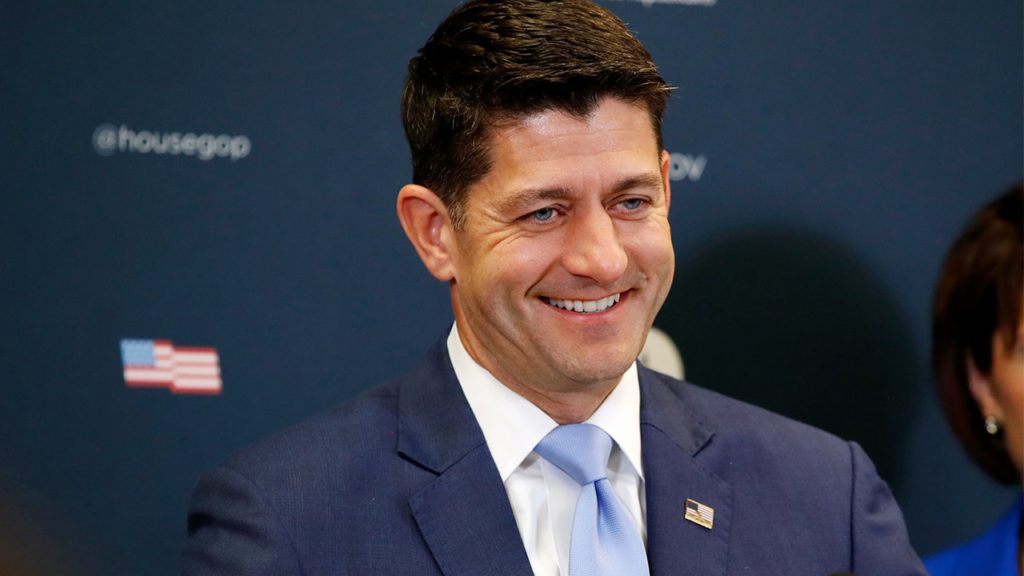 “Redemption is at the heart of the American Idea, and that’s what this is about.” — House Speaker Paul Ryan

The bill is a rare bipartisan endeavor in a typically log-jammed Congress and has attracted support from a coalition of liberal and conservative groups, including the American Civil Liberties Union and groups backed by the political donors Charles and David Koch. Critics say current sentencing guidelines are unfair and have had a lopsided impact on minority communities.

“Did I hear the word bipartisan?” Trump joked during a Roosevelt Room event announcing his backing for the deal. “Did I hear that word? That’s a nice word.”

But even as he hailed the cooperation, Trump couldn’t resist a swipe at his former political opponents, saying the “Clinton crime law” disproportionality affected black Americans.

The Senate package overhauls some of the mandatory sentencing guidelines that have been in place since 1994 legislation approved by Congress and signed into law by then-President Bill Clinton.

Grassley had said Tuesday the bill would be easier to pass after the departure of Attorney General Jeff Sessions, who was ousted by Trump after the Nov. 6 election. Sessions was a longtime opponent of criminal justice reform and had been especially wary of efforts to overhaul sentencing laws.

“I think we have a commitment from the Justice Department now to work with us on it,” Grassley said.

The federal inmate population has been on the decline since 2013 when it peaked at just more than 219,000. The total now stands at about 181,400, according to the Federal Bureau of Prisons. Still, that’s about triple the number of inmates in federal detention 30 years ago.

The Senate approach would allow thousands of federal prisoners sentenced for crack cocaine offenses before August 2010 the opportunity to petition for a reduced penalty. It would also lower mandatory minimum sentences for some drug offenses. The life sentence for some drug offenders with three convictions, or “three strikes,” would be reduced to 25 years.

But roughly 90 percent of prison inmates are held in state facilities and would not be affected by the legislation.

All but two Republicans voted for the House bill when it was overwhelmingly approved in May, 360-59. Democratic lawmakers supported the bill by about a 2-to-1 margin, but opponents voiced concerns that it did not go far enough in giving judges more discretion to make the punishment fit the crime.

The House bill directs the Bureau of Prisons to conduct assessments for every offender once he or she is sentenced and to offer rehabilitation plans designed to lower the chance of recidivism. The plans would include vocational training, education, counseling and substance abuse treatment.

The federal inmate population has been on the decline since 2013 when it peaked at just more than 219,000. The total now stands at about 181,400, according to the Federal Bureau of Prisons. Still, that’s about triple the number of inmates in federal detention 30 years ago.

Aid Group: 85,000 Children May Have Died of Hunger in Yemen