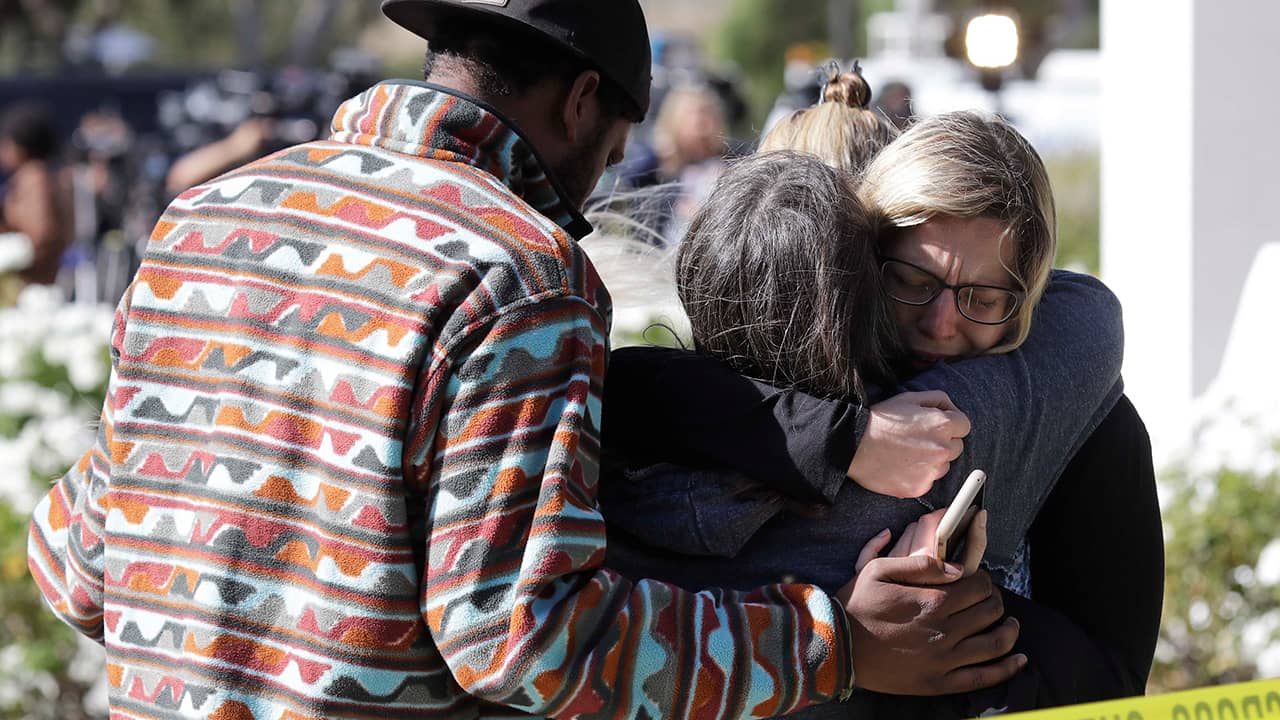 THOUSAND OAKS — Borderline Bar and Grill in California had become a safe haven for dozens of survivors of last year’s massacre at a Las Vegas country music festival, a place where they gathered for line dancing and drinks.

They found themselves in a terrifyingly familiar scene Wednesday night, when bullets began flying once again. This time, gunfire claimed a Navy veteran who had lived through the deadliest mass shooting in modern U.S. history a year ago.

“I already didn’t wish it on anybody to begin with for the first time,” Brendan Kelly said Thursday outside his Thousand Oaks home. “The second time around doesn’t get any easier.”

Kelly, a 22-year-old Marine, said he heard “pop, pop” and instantly knew it was gunfire.

“The chills go up your spine. You don’t think it’s real — again,” he said.

The mother of the 27-year-old man killed in the latest attack, Telemachus “Tel” Orfanos, said her son survived Vegas only to die inside Borderline, less than 10 minutes from his home in suburban Los Angeles.

“Here are my words: I want gun control,” said Susan Schmidt-Orfanos, her voice shaking with grief and rage. “I don’t want prayers. I don’t want thoughts.”

“Here are my words: I want gun control. I don’t want prayers. I don’t want thoughts.” — Susan Schmidt-Orfanos, mother of one of the victims

She said she wanted Congress “to pass gun control so no one else has a child that doesn’t come home.”

During Wednesday’s shooting, Kelly said he threw two of his friends to the floor and covered them with his body. Then he got a look at the shooter and the terror unfolding and decided they needed to escape.

Kelly said he dragged one woman out a back emergency exit and then, using his belt, T-shirt and Marine training, applied a tourniquet to his friend’s bleeding arm.

After the shooting was over, Kelly said he and another Marine friend helped victims alongside first responders. Two of his friends were among those killed.

Chandler Gunn, 23, told The Los Angeles Times that a friend who survived the Vegas shooting works at the bar. When Gunn learned about the shooting, he rushed to Borderline.

Gunn said his friend, whose name he didn’t provide, escaped safely out the back. Brendan Kelly speaks with reporters outside his home, as he shows his Route 91 tattoo, Thursday, Nov. 8, 2018, in Thousand Oaks, Calif. Kelly, a Marine who was at Borderline Bar and Grill on Wednesday night, helped people get out after a gunman opened fire at the establishment. Kelly also survived the Las Vegas Route 91 Harvest Festival shooting in 2017. (AP Photo/Ryan Pearson)

Country Music Fans Were the Victims

In social media posts, Molly Mauer said she was at Borderline and also survived Vegas.

“I can’t believe I’m saying this again. I’m alive and home safe,” she said on Facebook.

In Las Vegas and Thousand Oaks, country music fans were the victims. Borderline features country music, and Wednesday was “college night” that drew many young people to the bar. The Last Vegas shooter targeted a crowd of country music fans gathered for the Route 91 Harvest Festival.

Kelly has a large tattoo on his left arm memorializing the Las Vegas shooting, which killed 58 people. On his other arm Thursday, he still had his wristband from the California bar.

When the Las Vegas gunman opened fire from a 32nd-floor hotel room, Kelly said he threw a friend to the ground before helping get her out of the area and into a room. Armed with a knife in case an attacker came in, he hunkered down and waited with 40 other people for four hours.

Living Through Vegas Changed His Life

He said living through Vegas changed his life. He doesn’t know how a second mass shooting will affect him down the road.

“I know that, being a religious person, that God is never going to give me anything more than I can handle. I’m here for a reason.” — Brendan Kelly, victim

“Everywhere I go, everything I do is affected,” he said. “I don’t sit in a room with my back to the door. You’re always picking up on social cues. You’re always overanalyzing people, trying to figure out if something were to go down, ‘What would I do?'”

Kelly said Borderline had become a safe haven for dozens of Vegas survivors: “It is our home.”

A few weeks after the Vegas shooting, the bar held a benefit concert for five people from the area who were killed, and now-eerie social media posts show a number of survivors holding up a “Route 91” sign inside the bar at a six-month anniversary event.

Kelly said he’ll be looking to God for comfort in the coming weeks and months.

“I know that, being a religious person, that God is never going to give me anything more than I can handle,” he said. “I’m here for a reason.”

Florida Is Again at the Center of an Election Controversy