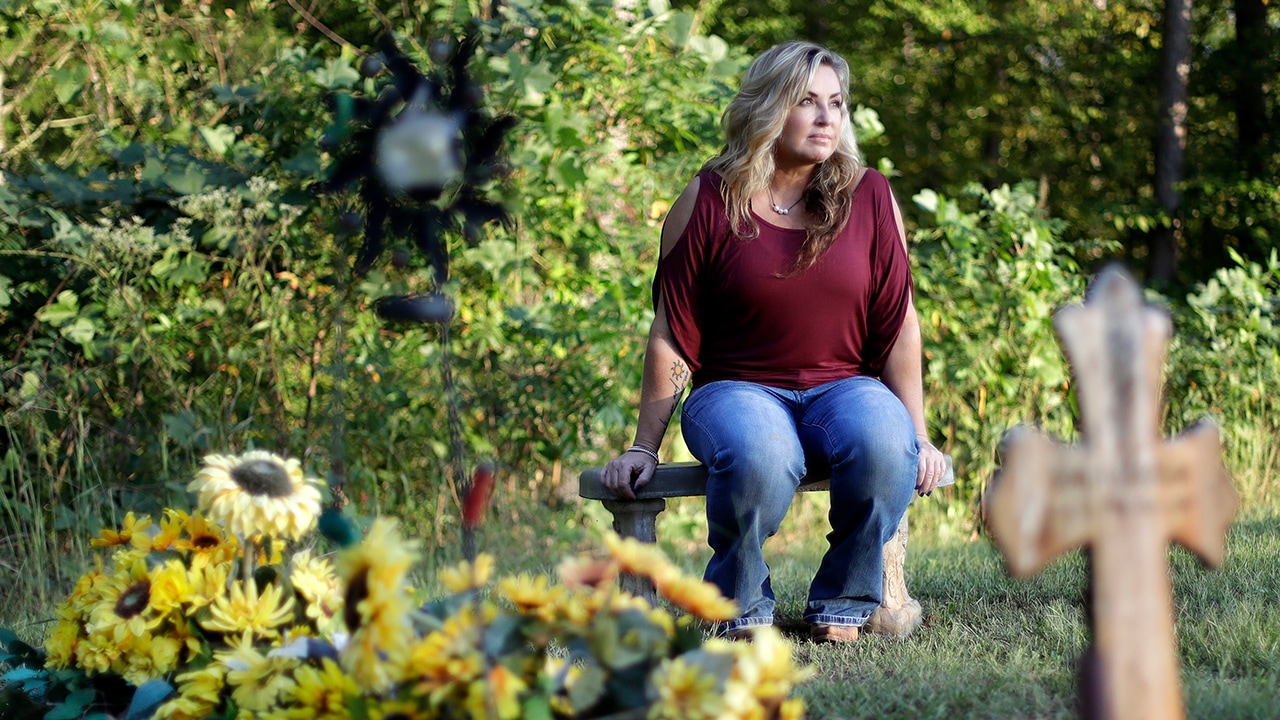 NASHVILLE, Tenn. — They have the date 10-1-2017 tattooed on their bodies and have memorial walls of pictures in their homes. One woman made a bracelet out of her Route 91 Harvest festival wristband, while many others can be spotted at concerts wearing shirts that say “survivor.” They fly flags from their RVs and have stickers on their cars.
About 22,000 people gathered in Las Vegas a year ago with a shared interest in country music. But as the festival’s final headlining act Jason Aldean was performing last Oct. 1, gunfire erupted and chaos ensued. By the end of the night 58 people were killed and hundreds more injured, the deadliest mass shooting in modern U.S. history.
Now a year later, many survivors, who were already bonded through the music, have formed a tight-knit, encouraging community as they heal, support and remember. They call themselves “Country Strong.”

Sonny Melton, a nurse from Big Sandy, Tennessee, loved Eric Church. When Church sang “These Boots,” Melton would take off his boots and raise them up in the air with all the other die-hard Church fans.


“I’ve just never seen anything where a group of people who are virtual strangers have wrapped their arms around each other in the way this group has.” — Heather Melton
He was at Route 91 to see Church play on Friday night, but stayed until Sunday to see Aldean.
Melton died when a bullet hit him in the back as he wrapped his arms protectively around his wife Heather that night at Route 91. Just days after the shooting, Church got on the stage of the Grand Ole Opry in Nashville, fighting back tears and his voice cracking with anger, pointing out the empty seats where Sonny and Heather Melton were supposed to be sitting that night.
“The reason I am here is because of Heather Melton, her husband Sonny, who died, and every person that was there,” Church said before performing “Why Not Me,” an ode to the fans that were lost.

“The next thing I know every Eric Church fan in the country was contacting me,” Heather Melton said. “At first I felt a little uneasy, but they were just so genuine in their compassion, in their sorrow for me that it was impossible to ignore. Those people have become some of my best friends.”
Melton now has Church’s lyrics tattooed on her arm along with a sun, a nod to her husband’s name. Her home now is shrine to the passions of her late husband, including guitars, a baseball jersey, a pair of boots that Church signed, concert tickets, posters and records.
Church’s fan club has adopted her, has raised money for a nursing scholarship in her husband’s name and traveled to concerts with her.
“I’ve just never seen anything where a group of people who are virtual strangers have wrapped their arms around each other in the way this group has,” Melton said.

Linda Liewsuwanphong, of Rosemead, California, was such a fan of country music she would go to concerts by herself. By the end of the night, she often made new friends. That same thing happened after she and her husband attended Route 91, but now she calls them family.

“The music makes us stronger. The music is what brings us together.” — Connie Long, from Riverside, California
When Armentrout went back to Stagecoach with her husband, months after the shooting, it wasn’t the same. “We were on edge so much,” she said. “It was just too much for me to handle.”
Other survivor groups hold monthly meetups, plan outings like attending sporting events, raise money for families that needed assistance, create Christmas card lists and share potluck dinners. They perform what they call “random acts of kindness,” where they will do something nice for a stranger, or leave a $58 tip in honor of those who were lost.
When Liewsuwanphong found out she was pregnant shortly after the shooting, a group of survivors came to her baby shower. Armentrout’s husband broke his rib during the shooting and he’s been out of work and she only works part time. Another survivor brought her Christmas gifts to give to her daughters during the holidays.
“The music makes us stronger,” Long said. “The music is what brings us together.” 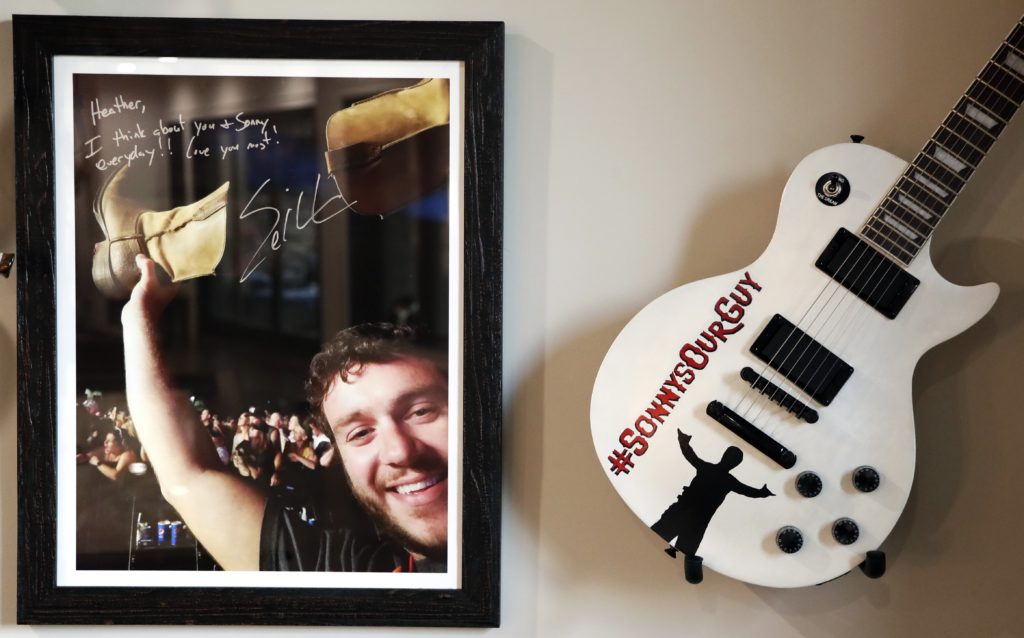 In this Sept. 25, 2018, photo, a picture of Sonny Melton, autographed by Eric Church, and a guitar from the Eric Church fan club are displayed on a wall in the home of Heather Melton in Big Sandy, Tenn. In the photo, Sonny Melton holds up a boot while at an Eric Church concert. Sonny died when he was shot while protecting his wife, Heather, at the Route 91 Harvest Festival mass shooting in Las Vegas on Oct. 1, 2017. Already connected by a love of country music, the festival shooting survivors have embraced Country Strong as mantra for their tight-knit, supportive community that has emerged in the wake of the country’s deadliest mass shooting. (AP Photo/Mark Humphrey)

Only those who experienced that night could understand the triggers and fears that many survivors share.
Janie Scott, of Bakersfield, California, along with her husband and a friend, were about 15 feet from the front of the stage when they heard a popping noise and then a pause before the first volley of gunfire started.

Michelle Rodriguez, of Eastvale, California, met her husband while line dancing at a country music club about 14 years ago. Married for a decade, now their kids listen to country music, too. But Route 91 almost took away those fond memories for her.

US, Canada Reach Deal to Stay in Trade Pact With Mexico