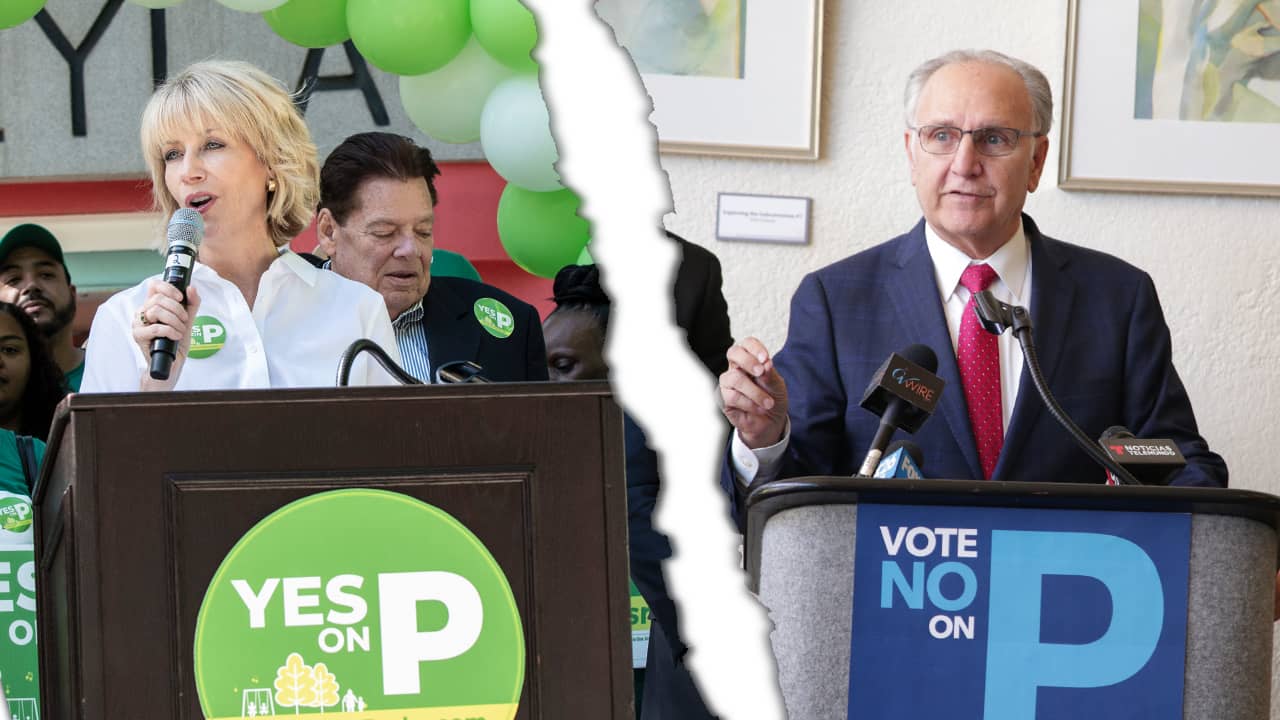 Measure P is the heavyweight local issue on the ballot for Fresno city voters.
It’s a proposal to raise the sales tax by 3/8 of a cent for 30 years to build, fix and maintain parks and trails, and fund cultural arts.
But it’s also a scrap to decide Fresno’s political pecking order — today and in the future.

Many famous people have been credited with some variation of “in politics, there are no permanent enemies and no permanent friends, only permanent interests.”
Measure P shows us the truth of those words.

Could you ever imagine former Mayor Alan Autry and Police Chief Jerry Dyer on opposite sides?
Or former Mayor Ashley Swearengin colliding head-on with Mayor Lee Brand, the fellow Republican she endorsed for the job in the 2016 election?


Could you ever imagine former Mayor Alan Autry and Police Chief Jerry Dyer on opposite sides? Or former Mayor Ashley Swearengin colliding head-on with Mayor Lee Brand, the fellow Republican she endorsed for the job in the 2016 election?
The same Brand who spent 2017 completing or implementing much of Swearengin’s unfinished agenda?
Measure P has accomplished the untying of these tightly wound knots.
It also has put a couple busted knots back together. One of them is GV Wire Publisher Darius Assemi, who backed Henry R. Perea in the 2016 mayoral campaign, joining forces with Brand on the No on P team.
The Yes-or-No-on-P question has even divided the usually march-step business community.
While the Fresno Chamber of Commerce opposes the parks tax, such business heavyweights as former Pelco CEO David McDonald and Valley Children’s Hospital CEO Todd Suntrapak strongly support it.

With @jolie_limon & @AshleyCVCF to support @fresnoforparks. When kids have access to to the outdoors, to neighborhood parks & green space, they recover and heal more quickly. @CareForKids is a strong supporter of Measure P. #FuturesWorthFightingFor pic.twitter.com/wWNUU4CrCk

Yes on P Shows That Swearengin Packs Plenty of Muscle

Thus far, Swearengin and her army of community activists have out-flanked and out-hustled Brand and the late-forming No on P coalition.
The Yes on P campaign, however, has the heavier lift. It must win over two-thirds of voters, always a high bar. This time, it’s more challenging because of opposition from Dyer and Fire Chief Kerri Donis, as well as the city’s police and firefighter unions.
And, remember, the three countywide sales taxes Fresno residents now pay — for the zoo, public libraries, and transportation — had the chamber of commerce’s blessing.

Clearly, the mayor and his political guru, Tim Orman, didn’t fully grasp how, under Swearengin’s leadership, the Central Valley Community Foundation was transitioning from a philanthropic repository to a regional change agent.
Nor did they recognize Swearengin’s determination to see her pride-and-joy General Plan, which was passed with much fanfare in 2014, fulfill its goal of promoting in-fill development. Without better parks in the city’s core, new private investment is a tough sell and the General Plan is a pipedream. As the document states:
“A key need addressed in the element is the shortage of parks and recreation space, particularly in established areas of the city, and a lack of access to these facilities for all Fresnans. This element aims to provide those special places that support a sense of community and are vital to creating a livable and sustainable Fresno.”
When a reactive Brand finally tried to put forward a combined tax, he failed to get the support of a city council that could have put it on the ballot pronto.
Yes, Brand foisted the plan on the council at the last minute. But the three council conservatives — Garry Bredefeld, Steve Brandau and Clint Olivier — instinctively genuflected to the “no new taxes” crowd without pausing to consider the negative consequences of their opposition.

There Will Be a Sales Tax Measure on the 2020 Ballot, Too

I have no idea if Measure P will be voted up or down.
But this is virtually guaranteed: If P fails, there will be a combined public safety and parks sales tax measure on the 2020 Fresno ballot. And if P passes, the public safety advocates will have their own measure for voters to consider in two years.
The needs are real. These issues aren’t going away. Addressing both of them makes Fresno a better city — especially south of Shaw Avenue.