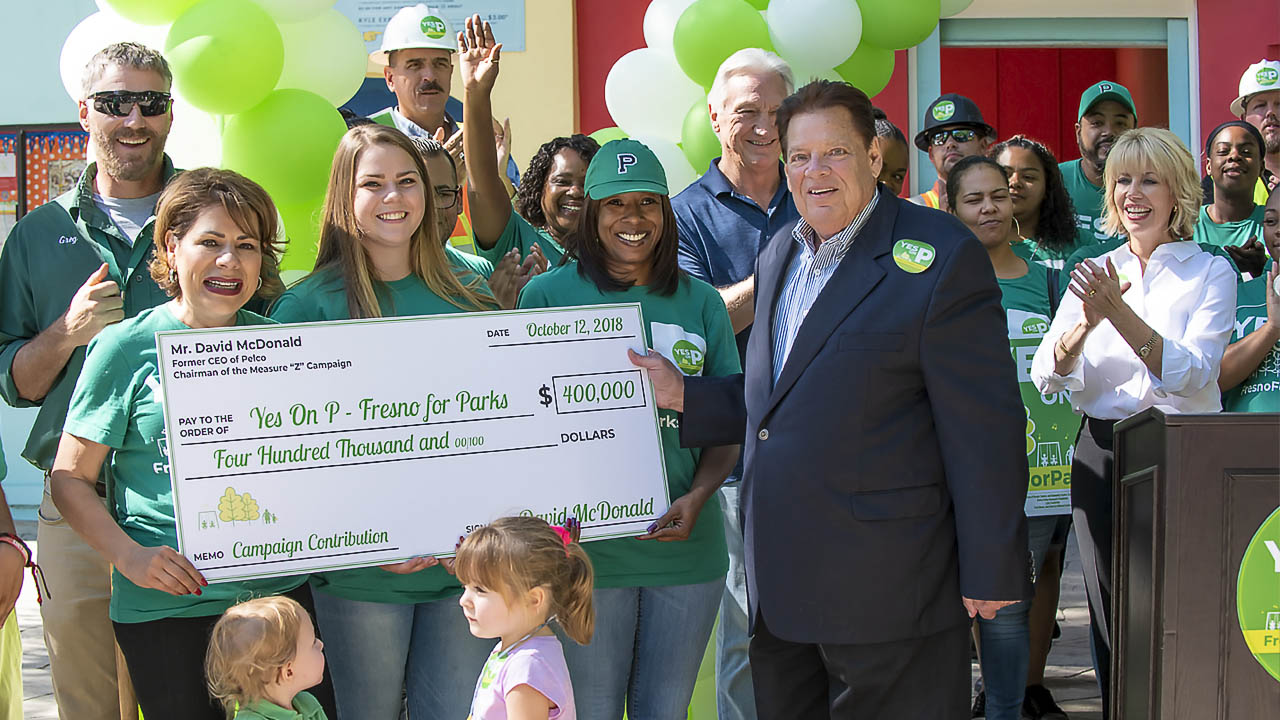 Advocates for a sales tax on the November ballot benefiting Fresno parks said Friday that the plan would allow for the funding of police officers.
“If we allocate $5 million for the safety and security of our parks, that could hire 42 additional uniformed Fresno police officers working for Jerry Dyer,” former Pelco CEO and parks supporter David McDonald said at a news conference at Storyland/Playland in Roeding Park.


“If we allocate $5 million for the safety and security of our parks, that could hire 42 additional uniformed Fresno police officers working for Jerry Dyer.”—Yes on P supporter David McDonald
“Even before a public safety measure comes to be, which hopefully will be in two years, we are going to be doing our part to get started in making things safe and secure around here.”
Measure P calls for a 3/8 of a cent sales tax hike benefiting parks, trails, and cultural arts, raising about $38 million annually for 30 years.
One of the main No on P campaign arguments is that any tax increase should go to public safety first, if not a combined future measure. The No on P backers include the Fresno Chamber of Commerce as well as unions representing the city’s police and firefighters.
Parks supporters recently have tried to blunt the force of opponents by saying they would actively support and fund a future public safety sales tax proposal. And, in the past, the Yes on P campaign mentioned a park ranger program. Now, it appears Measure P could fund police in a similar fashion as grants and outside funding are used to assign officers to FAX and Fresno Unified School District.
Included in the Yes on P campaign press kit: a Top 15 wish list for how to spend the money. Funding police occupied the top spot.
GV Wire reached out to the Fresno Police Officers Association and Chief Jerry Dyer for a comment. This story will be updated should they respond. 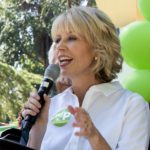 “Making sure we have additional safety personnel in and around our parks is an eligible expense. It’s up to the city to determine how they want to appropriate these dollars.” — former mayor Ashley Swearengin
In the beating sun in front of the castle welcoming families to Storyland, McDonald also announced a $400,000 contribution to the Measure P effort.
McDonald helped spearhead the voter-approved Measure Z campaign in 2004 that raised the sales tax countywide to support the Fresno Chaffee Zoo.
McDonald said he wants to see the Veterans Memorial Auditorium restored with Measure P funds. He called the current state of the facility “an embarrassment.”
Measure P’s language allows for the tax funds to go to any “city-owned arts, cultural and recreational facility located in parks, including Storyland/Playland and the Veterans Memorial Auditorium.”

Former mayor Ashley Swearengin said the ordinance’s language allows for spending on police. She is CEO of the Central Valley Community Foundation, which is organizing support for the measure.
“We are very concerned about safety in our parks. So, making sure we have additional safety personnel in and around our parks is an eligible expense. It’s up to the city to determine how they want to appropriate these dollars,” Swearengin said. “We trust our police chief and mayor to do that.” 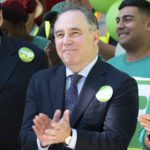 Hospitals Also on Board

Also at the news conference, which more resembled a pep rally, Valley Children’s Hospital CEO Todd Suntrapak announced the support of his facility through the California Children’s Hospital Association.
He said supporting Measure P aligns with the hospital’s mission of improving children’s lives.
“Measure P is absolutely compelling as you contemplate how to improve the health and well-being of kids,” Suntrapak said.

Thursday night (Oct. 11), GV Wire hosted a Measure P forum, where the argument boiled down to supporting Fresno parks vs. over-taxation.
Retired businessman Paul Gibson and Sharon Weaver, executive director of the San Joaquin River Parkway & Conservation Trust represented Yes on P. Fresno City Councilman Garry Bredefeld argued against the tax in the absence of representatives from the official No on P campaign.
Gibson and Weaver told the audience of approximately 30 people at the Islamic Cultural Center of Fresno that parks are a wise investment. The ballot measure also includes money for arts, after-school programs and job training that aligns with the parks master plan that the city council adopted earlier this year.
Bredefeld agreed about the need for parks but said Measure P is a flawed plan. The sales tax, if passed, sunsets in 30 years, and that’s much too long, Bredefeld said. He also warned that in an economic downturn, Measure P could cause layoffs of public safety personnel. He cited a provision of the measure that requires city spending on parks to remain at least at 2017-18 levels.

More Water Will Flow to the Valley Upon Trump's Signature

With Ashjian Leaving, Who Will Represent Bullard High Area Next?