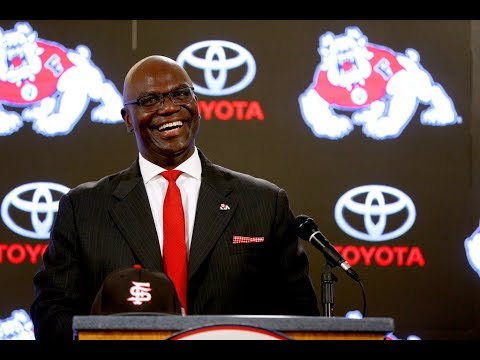 The summer hiring of Terry Tumey as Fresno State’s new athletic director has been followed by a shake-up in the department’s top ranks.
Steve Robertello, who served as the interim athletics director and was a finalist for the job that Tumey landed, was reassigned in August. He now is the special assistant to the vice president for student affairs and enrollment management, the university said Thursday.
Robertello came to Fresno State in 2012 after more than 10 years at Washington State, where he rose to associate athletic director.

Paul Ladwig, an athletic department administrator since 2005, has been on paid leave since Sept. 6. A university spokeswoman said that his employment will end June 7, 2019.
Ladwig joined the Bulldogs in 2005, following then-athletic director Thomas Boeh from Ohio University.

Ladwig served as the senior associate athletics director for external communication since 2011. He previously was the associate athletics director over external relations and broadcasting.
He kicked off the news conference announcing the hiring of Tumey on June 25, 2018.
An 18-year department veteran, John Kriebs, also went on paid leave on Sept. 6. His ending date with Fresno State is June 24, 2019, the university said.
Kriebs most recently was the associate athletics director for internal operations.
Carl Ueland, vice president of the Bulldog Foundation, said Ladwig’s departure took him by surprise.
“I liked Paul, he was a pretty good guy. It’s the new athletic director’s choice, but I don’t know what his rationale was,” Ueland said.

Fresno Council Says 'No' to Utility Hikes, For Now