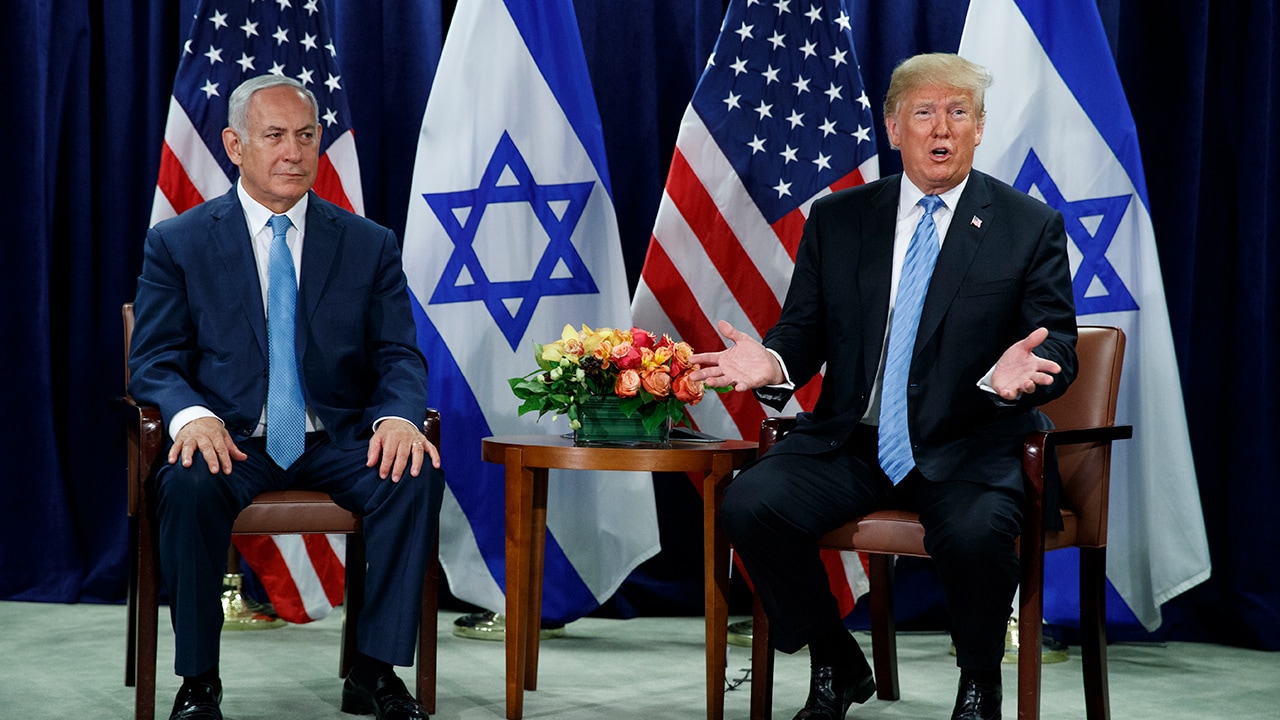 UNITED NATIONS — For the first time since taking office, President Donald Trump endorsed a two-state solution as the best way to resolve the conflict between Israel and the Palestinians, as he met Wednesday at the U.N. with Israeli Prime Minister Benjamin Netanyahu.
Trump told reporters that he believes that two states — Israel and one for the Palestinians — “works best.” He has previously been vague on the topic, suggesting that he would support whatever the parties might agree to, including possibly a one-state resolution, which might see the Palestinian territories become part of Israel.
“I like (a) two-state solution,” Trump said as he posed for photographs with Netanyahu. “That’s what I think works best. That’s my feeling. Now you may have a different feeling. I don’t think so. But I think two-state solution works best.”


“Now you may have a different feeling. I don’t think so. But I think two-state solution works best.” — President Donald Trump
The president added that his much anticipated but still unreleased Mideast peace plan could be presented in the next two to four months but was not specific as to timing.

Trump has been heavily criticized by the Palestinians for a series of moves that they say show distinct bias toward Israel, starting with his recognition last year of Jerusalem as Israel’s capital. The Palestinians also claim the holy city as the capital of an eventual state. Earlier this year, Trump followed up on the recognition by moving the U.S. Embassy in Israel from Tel Aviv to Jerusalem, a step that was widely protested by Palestinians and others in the Arab world.
His administration has also slashed aid to the Palestinians by hundreds of millions of dollars and ended U.S. support for the U.N. agency that helps Palestinian refugees.
Trump and his national security team have defended their position, saying that decades of attempts to forge Israeli-Palestinian peace have failed.
He said Wednesday that the embassy move would actually help peace efforts by recognizing the reality that Israel identifies Jerusalem as its capital. But, he added that Israel would have to make concessions to the Palestinians in any negotiations.
“Israel got the first chip and it’s a big one,” Trump said. “By taking off the table the embassy moving to Jerusalem, that was always the primary ingredient as to why deals couldn’t get done. Now that’s off the table. Now, that will also mean that Israel will have to do something that is good for the other side.”

US Will Continue Sanctions on Iran

Netanyahu thanked Trump for his support, his decision to withdraw from the Iran nuclear deal and said U.S.-Israel relations have never been better than under his administration. On Tuesday, Trump attacked Iran in his annual address to the U.N. General Assembly, accusing its leaders of corruption and spreading chaos throughout the Middle East and beyond. He also vowed to continue to impose sanctions on Iran.
“Thank you for your strong words yesterday in the General Assembly against the corrupt terrorist regime in Iran,” Netanyahu said. “They back up your strong words and strong actions.”