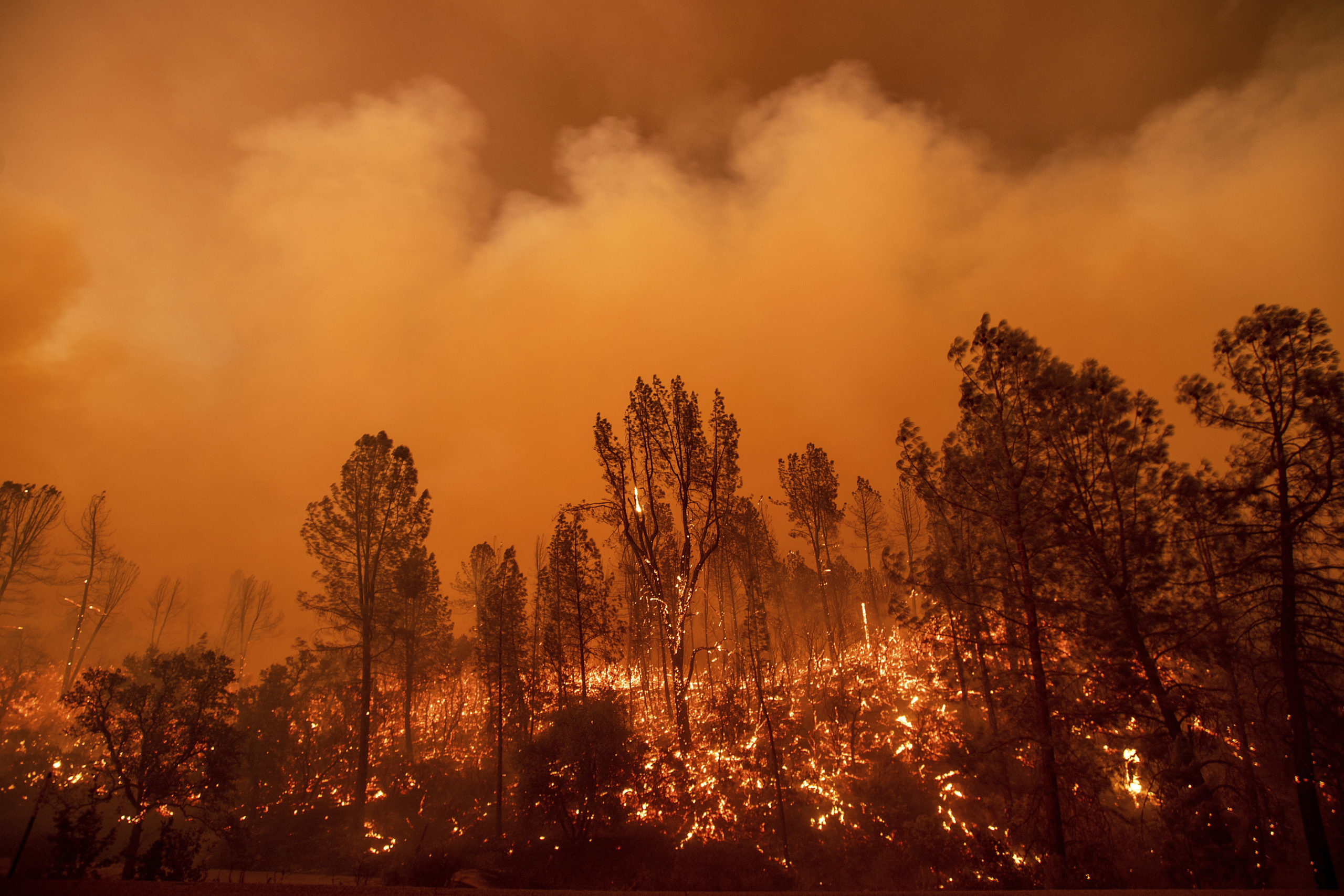 REDDING — An explosive wildfire tore through two small Northern California communities before reaching the city of Redding, killing a bulldozer operator on the fire lines, killing a city of Redding firefighter, burning three firefighters, destroying 65 homes and forcing thousands of terrified residents to flee.
Flames swept through the communities of Shasta and Keswick before jumping the Sacramento River on Thursday and reaching Redding, a city of about 92,000 people and the largest in the region.


“It’s just chaotic. It’s wild. There’s a lot of fire, a lot of structures burning.” — Cal Fire spokesman Scott McLean
The Carr Fire is “taking down everything in its path,” said Scott McLean, a CalFire spokesman for the crews battling the blaze.
Residents who gathered their belongings in haste described a chaotic and congested getaway as the fire leaped across the wide Sacramento River and torched subdivisions in Redding, which is about 100 miles south of the Oregon border.
“I’ve never experienced something so terrifying in my life,” said Liz Williams, who loaded up two kids in her car and then found herself locked in bumper-to-bumper traffic with neighbors trying to retreat from Lake Redding Estates. She eventually jumped the curb onto the sidewalk and “booked it.”
“I didn’t know if the fire was just going to jump out behind a bush and grab me and suck me in,” Williams said. “I wanted out of here.”
The blaze leveled dozens of homes, leaving neighborhoods smoldering and 37,000 people under evacuation orders.
The flames moved so fast that firefighters working in oven-like temperatures and bone-dry conditions had to drop efforts to battle the blaze to help people escape.
The fire, which created at least two flaming tornados that toppled trees, shook trucks and shattered windows, took “down everything in its path,” said McLean.
Fire officials warned that the blaze would probably burn deeper into urban areas before there was any hope of containing it, though it either changed direction or was stopped before it could burn into the core of the city.
Residents in the western part of Redding who hadn’t been under evacuation orders were caught off guard and had to flee with little notice, causing miles-long traffic jams as flames turned the skies orange.
“When it hit, people were really scrambling,” McLean said. “There was not much of a warning.”

Many firefighters turned their focus from the flames to getting people out alive.
“Really we’re in a life-saving mode right now in Redding,” said Jonathan Cox, battalion chief with Cal Fire. “We’re not fighting a fire. We’re trying to move people out of the path of it because it is now deadly and it is now moving at speeds and in ways we have not seen before in this area.”
Some residents drove to hotels or the homes of family members in safer parts of California, while other evacuees poured into a shelter just outside of town.
A reporter with KRCR-TV choked up as she reported live updates about the fire before the station had to go off the air later. Two news anchors told viewers that the building was being evacuated and urged residents to “be safe.”
Journalists at the Record Searchlight newspaper tweeted about continuing to report on the fire without electricity in their newsroom, and a reporter at KHSL-TV wrote on Twitter that the station’s Redding reporters were “running home to gather their things.”
Mike Mangas, a spokesman at Mercy Medical Center, said the hospital was evacuating five babies in its neonatal intensive care unit, which cares for premature newborns, and taking them to medical facilities outside of the area.
He said the hospital was preparing high-risk patients to be evacuated but there were no immediate plans to do so.
He said several burn patients were admitted to the emergency room but that most were being treated and released.

Late Thursday, crews found the body of a bulldozer operator who was hired privately to clear vegetation in the blaze’s path, McLean said.
The fire burned over the operator and his equipment, making the man the second bulldozer operator killed in a California blaze in less than two weeks.
The California Department of Forestry and Fire Protection said Friday that a firefighter with fire department in the city of Redding was killed fighting the blaze in Shasta County.
The department says it is investigating the death. No other details were provided.
Three firefighters and an unknown number of civilians had burns, but the extent of their injuries wasn’t immediately known, McLean said.
“It’s just chaotic. It’s wild,” he said. “There’s a lot of fire, a lot of structures burning.”

Firefighters tried in vain to build containment around the blaze Thursday but flames kept jumping their lines, he said.
“It’s just a heck of a fight,” he said. “They’re doing what they can do and they get pushed out in a lot of cases. We’re fighting the fight right now.” 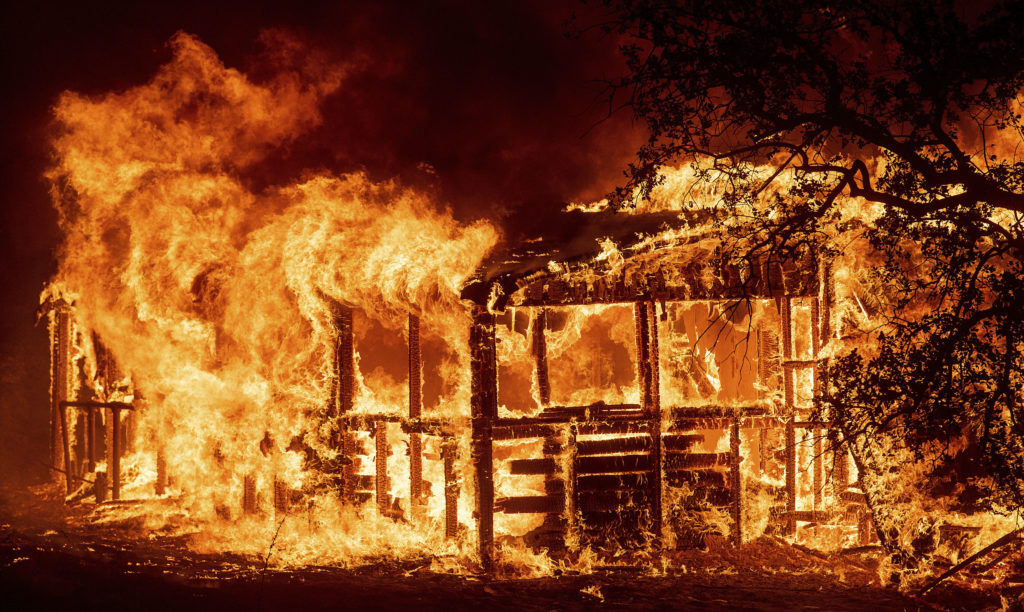 A structure burns as the Carr Fire races along Highway 299 near Redding on Thursday, July 26, 2018. (AP Photo/Noah Berger)

He said the fire behavior was so erratic, there were tornadoes within the fire “tossing around equipment, blowing windows out of Cal Fire pickup trucks.”
The 45-square-mile fire that began Monday tripled in size overnight Thursday amid scorching temperatures, low humidity and windy conditions. , it was sparked by a mechanical issue involving a vehicle, Cal Fire said.
Brett Gouvea, incident commander of the crews battling the fire, urged residents to pay close attention to the blaze.
“This fire is extremely dangerous and moving with no regard for what’s in its path,” he said.

Earlier in the day with flames exploding around Whiskeytown Lake, an effort to save boats at a marina by untying them from moorings and pushing them to safety, wasn’t swift enough to spare them all.
Dozens of charred, twisted and melted boats were among the losses at Oak Bottom Marina.
“The boat docks down there — all the way out in the water — 30 to 40 boats caught fire when the fire laid down on top of them last night and burned those up,” said fire Chief Mike Hebrard of the California Department of Forestry and Fire Protection.
Wildfires throughout the state have burned through tinder-dry brush and forest, forced thousands to evacuate homes and caused campers to pack up their tents at the height of summer. Gov. Jerry Brown declared states of emergency for the three largest fires, which will authorize the state to rally resources to local governments.
The wildfires have dispatched firefighters to all corners of the state amid an oppressive heat wave.
The Ferguson Fire continues to grow outside Yosemite National Park. That blaze killed 36-year-old Braden Varney, a heavy equipment operator for the California Department of Forestry and Fire Protection whose bulldozer rolled over into a ravine July 14.
Hundreds of miles to the south, the Cranston Fire grew to 7.5 square miles and about 3,000 residents remained under evacuation orders in Idyllwild and several neighboring communities. That fire, which destroyed five homes, is believed to have been sparked by arson.