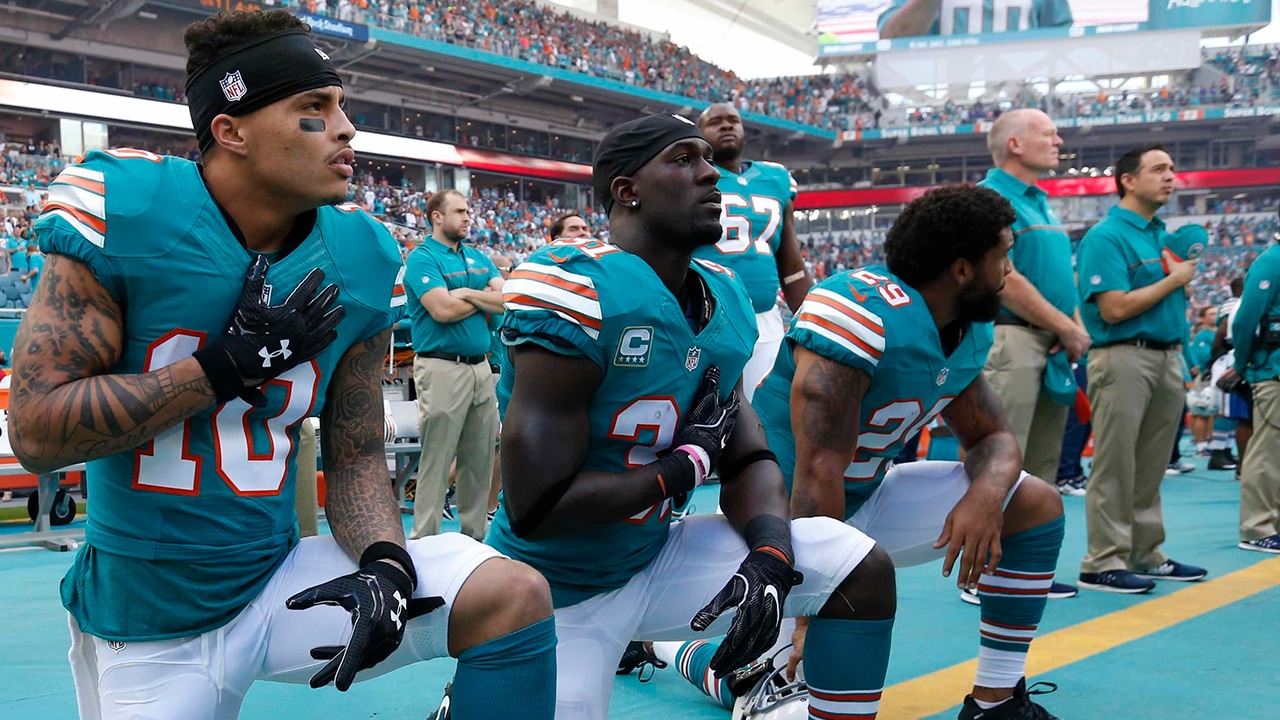 The NFL’s two-month-old national anthem policy is on hold.
Hours after The Associated Press reported that Miami Dolphins players who protest on the field during the anthem could be suspended for up to four games under a team policy issued this week, the league and the players union issued a joint statement late Thursday night saying the two sides are talking things out.
“The NFL and NFLPA, through recent discussions, have been working on a resolution to the anthem issue. In order to allow this constructive dialogue to continue, we have come to a standstill agreement on the NFLPA’s grievance and on the NFL’s anthem policy. No new rules relating to the anthem will be issued or enforced for the next several weeks while these confidential discussions are ongoing,” the statement read.
“The NFL and NFLPA reflect the great values of America, which are repeatedly demonstrated by the many players doing extraordinary work in communities across our country to promote equality, fairness, and justice. Our shared focus will remain on finding a solution to the anthem issue through mutual, good faith commitments, outside of litigation.”
The issue has dominated headlines over the past two seasons, caused division and alienated some fans.

Punishments Have Been Determined by Each NFL Team

The NFL rule that was passed in May forbid players from sitting or taking a knee if they are on the field or sidelines during “The Star-Spangled Banner,” but allowed them to stay in the locker room if they wish. The policy said teams would be fined if players didn’t stand during the anthem while on the field. The league left it up to teams on how to punish players.
None of the team policies had been made public until the AP obtained a copy of Miami’s nine-page discipline document. It included a one-sentence section on “Proper Anthem Conduct” and was provided to the AP by a person familiar with the policy who insisted on anonymity because the document is not public. It classifies anthem protests under a large list of “conduct detrimental to the club,” all of which could lead to a paid or unpaid suspension, a fine or both.


“The NFL required each team to submit their rules regarding the anthem before their players reported to training camp. We will address this issue once the season starts. All options are still open.” — Miami Dolphins
Miami can choose not to issue any suspension nor fine any player guilty of “conduct detrimental to the club.” Other violations under that label include drug use or possession, gambling, breaking curfew and riding motorcycles as a driver or passenger from the start of camp until the last game of the season.
Jets acting owner Christopher Johnson said shortly after the league announced its policy that he will not punish his players for any peaceful protests — and would pay any potential fines incurred by the team as a result of his players’ actions.
The new league rules were challenged this month in a grievance by the players union. The NFLPA said the NFL policy, which the league imposed without consultation with the players union, is inconsistent with the collective bargaining agreement and infringes on player rights. Now, the two sides are hoping to reach a solution without litigation.
Dolphins veteran receiver Kenny Stills took a knee with a hand on his heart during the anthem throughout last season. Defensive tackle Jordan Phillips put his arm around Stills before one game. Two other players who knelt — safety Michael Thomas and tight end Julius Thomas — are no longer with the team.
Defensive end Robert Quinn, who raised his fist during the anthem while with the Rams, is now with the Dolphins.
“Players who are on the field during the Anthem performance must stand and show respect for the flag and the Anthem,” says the 16th and final bullet point on Miami’s list of conduct considered detrimental, below disparaging teammates, coaches or officials including NFL Commissioner Roger Goodell.
The NFL started requiring players to be on the field for the anthem in 2009 — the year it signed a marketing deal with the military.

In 2016, then-49ers quarterback Colin Kaepernick began protesting police brutality, social injustice, and racial inequality by kneeling during the national anthem, and the demonstration spread to other players and teams.
Critics led by President Donald Trump called the players unpatriotic and even said NFL owners should fire any player who refused to stand during the anthem. Some players countered that their actions were being misconstrued and that they are seeking social change rather than protesting the anthem itself.
Trump’s criticism led more than 200 players to protest during one weekend, and some kept it up throughout the season.
The league and a coalition of players have been working in tandem to support player initiatives for a variety of social issues. The NFL is committing $90 million over the next seven years to social justice causes in a three-segment plan that involves league players.
Kaepernick didn’t play at all last season and still hasn’t been picked up by another team. He threw 16 touchdown passes and four interceptions in his final season in 2016. Safety Eric Reid, one of Kaepernick’s former teammates and another protest leader, is also out of work.
Both have filed collusion grievances against the NFL.