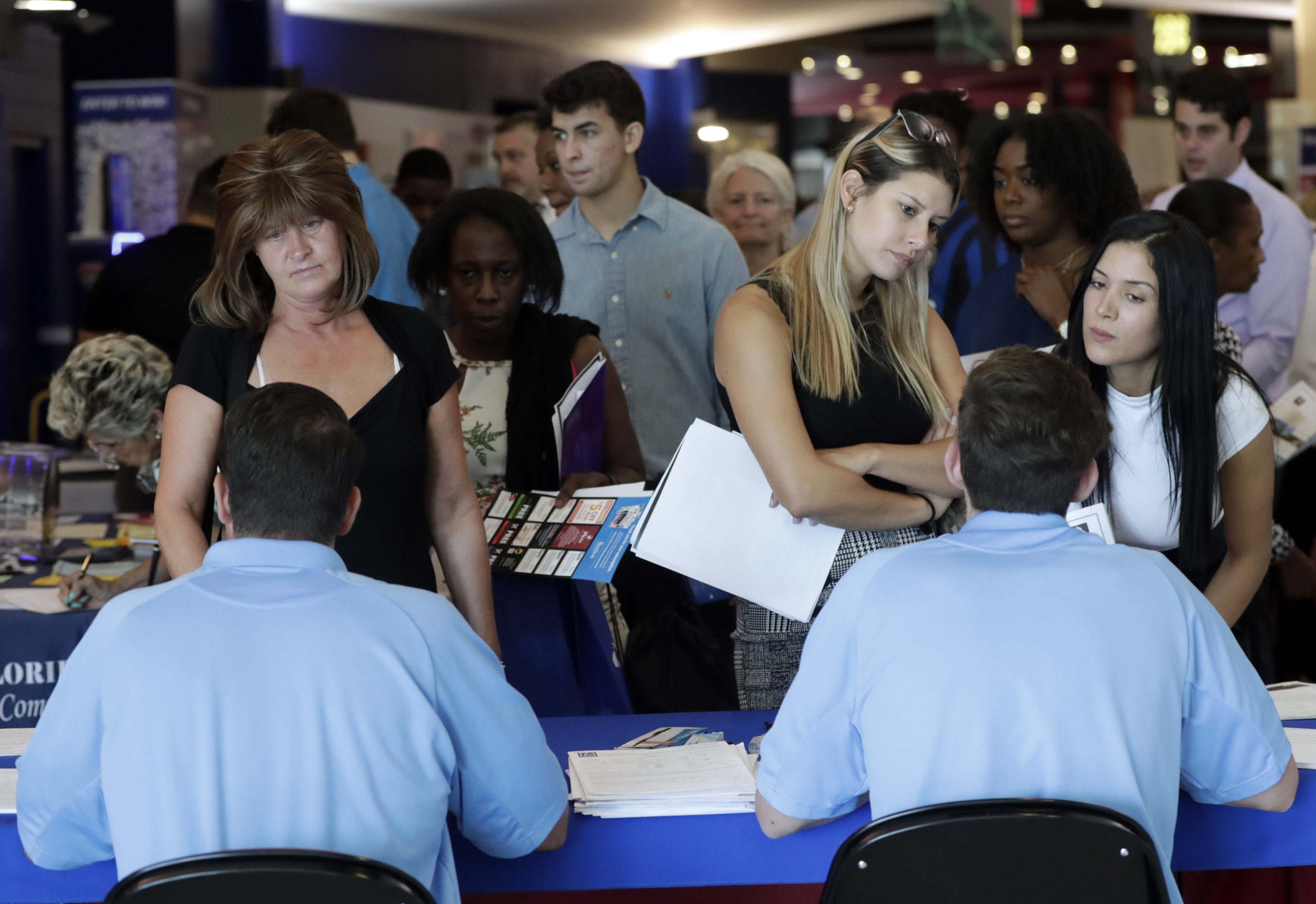 WASHINGTON — U.S. employers kept up a brisk hiring pace in June by adding 213,000 jobs, a sign of confidence in the economy despite the start of a potentially punishing trade war with China.
The job growth wasn’t enough to keep the unemployment rate from rising from 3.8 percent to 4 percent, the government said Friday. But the rate rose for an encouraging reason: More people felt it was a good time to begin looking for a job, though not all of them immediately found one.
The growing optimism that people can find work suggested that the 9-year old U.S. economic expansion — the second-longest on record — has the momentum to keep chugging along. Yet its path ahead is uncertain. Just hours before the monthly jobs report was released, the Trump administration imposed taxes on $34 billion in Chinese imports, and Beijing hit back with tariffs on the same amount of U.S. goods.
“The tariffs jumble things about what we should expect to see in the next few months,” said Cathy Barrera, chief economist at ZipRecruiter, the online jobs marketplace. 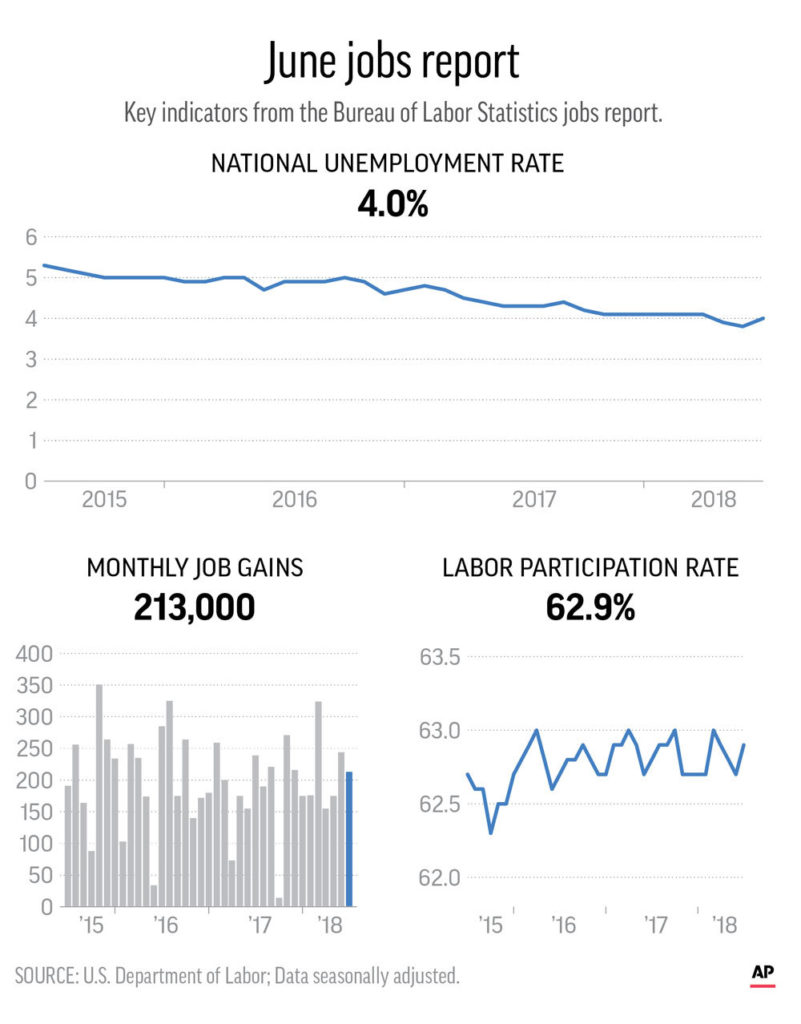 Some companies will likely respond to the tariffs by putting their hiring plans on hold until the trade picture becomes clearer.

Major U.S. stock indexes were mostly higher Friday after the jobs report was issued, keeping the market on track for a weekly gain after two weeks of losses.
The June jobs data showed an economy that may be on the cusp of producing stronger pay growth, something that could be disrupted if additional tariffs are imposed. Trump has suggested that more than $500 billion worth of Chinese imports could be taxed in his drive to force Beijing to reform its trade policies, which he insists have unfairly victimized the United States.
Average hourly pay rose just 2.7 percent in June from 12 months earlier. That relatively modest increase means that, after adjusting for inflation, overall wages remain nearly flat. But the average was skewed downward in June because the job seekers were mainly those with only a high school education or less, who are generally paid lower wages, Barrera noted.

Jobs Up But Wages Are Flat

The ranks of unemployed people seeking jobs jumped by 499,000 in June, which caused the unemployment rate to rise from its previous 18 year-low. With 93 straight months of job growth — a historical record — many employers have said they’re feeling pressure to raise wages. But significant pay gains have yet to emerge in the economic data.
Mara Fortin, who owns seven Nothing Bundt Cake stores in the San Diego area, said she raised pay last month to $13 an hour from $11.50. A widespread availability of jobs and the prospect of higher wages at other employers made it harder to retain workers, she said.
“In the past six months, people were just leaving right and left,” she said. “We’ve seen that happen at an alarming rate.”
Manufacturers added 36,000 jobs last month. The education and health sector added 54,000. But retailers shed 21,600 jobs, with the losses concentrated at general merchandise stores.

In its report Friday, the government revised up its estimate of job growth in May and April by a combined 37,000. Over the past three months, the economy has produced a robust average monthly job gain of 211,000.
The broader U.S. economy appears sturdy. Economists are forecasting that economic growth accelerated to an annual pace of roughly 4 percent during the April-June quarter, about double the previous quarter’s pace.
Signs of strength have helped bolster hiring despite the difficulty many employers say they’re having in finding enough qualified workers to fill jobs.
Manufacturers and services firms have said in recent surveys that their business is improving despite anxiety about the tariff showdown. Housing starts have climbed 11 percent so far this year. Retail sales jumped a strong 0.8 percent in May in a sign that consumers feel secure enough to spend.
Though economic growth appears to be solid, the gains have been spread unevenly. President Donald Trump’s tax cuts have provided a dose of stimulus this year, but the benefits have been tilted significantly toward wealthy individuals and corporations. Savings from the tax cuts enabled companies in the Standard & Poor’s 500 stock index to buy back a record number of shares in the first three months of 2018.
Yet the tax cuts have done little to generate substantial pay growth. Most economists say they still think the low unemployment rate will eventually force more employers to offer higher pay in order to fill jobs.

The economy also faces a substantial threat from the trade tension with China and from other trade disputes with U.S. allies, including Canada and Europe. Any escalation in the conflict with China could disrupt hiring as companies grapple with higher import prices and diminished demand for their exports. On Thursday, Trump floated the prospect of imposing tariffs on more than $500 billion in Chinese imports.
The Trump administration has also applied tariffs on steel and aluminum from allies like Canada and Mexico and has threatened to abandon the North American Free Trade Agreement. Trump has spoken about slapping tariffs on imported cars, trucks and auto parts, which General Motors has warned could hurt the U.S. auto industry and drive up car prices. Automakers added 12,000 jobs in June.